Concerns over the spread of the Delta variant and rising inflation dominated equity market performance globally, amid expectations of a strong Q2 earnings season. In the US, S&P 500 and Nasdaq fell by 1% while in Europe, both FTSE and Stoxx ended the week lower by 1.6% and 0.6% respectively. China’s CSI300 ended marginally higher, though its banking index fell to its lowest level in 6 months during the week. MSCI all country index recorded a peak last week but closed 0.6% lower. Regional markets were mostly down, with Egypt and Abu Dhabi exchanges posting the highest gains. The dollar gained last week, while sterling closed lower (-0.9%). Oil prices declined last week: the OPEC+ meeting held earlier today decided to boost oil supply by a further 2mn barrels per day (bpd) from Aug-Dec 2021 (UAE will see its baseline production increase to 3.5mn bpd from May 2022, while Saudi and Russia’s baseline will rise to 11.5mn bpd each; more in Media Review section). Gold price edged up by a marginal 0.2% over the past week. 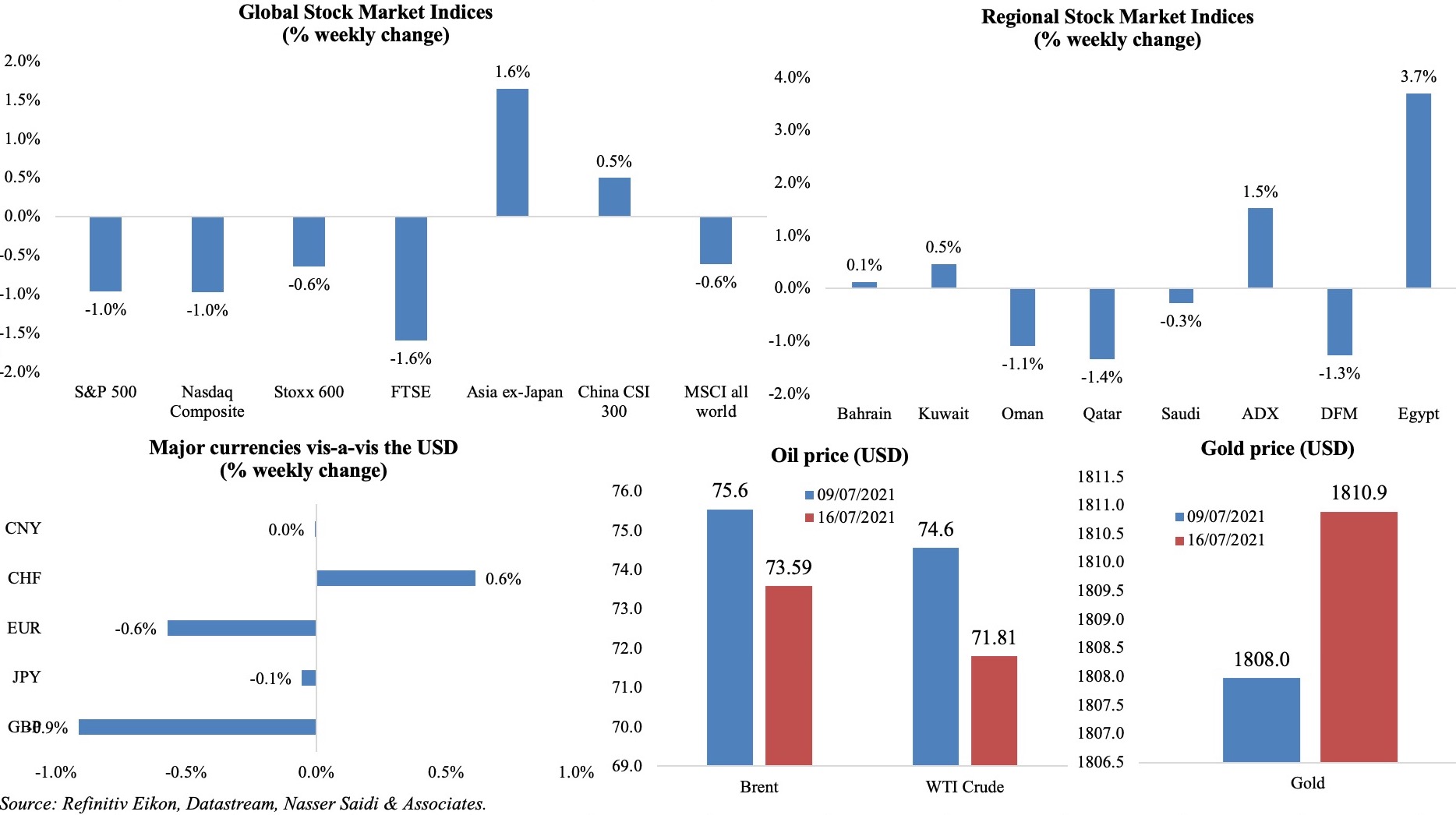 Bottomline: The more transmissible Delta variant is dominating news, be it in Indonesia – which has the highest test positivity rates globally (more than 27%) and where less than 6% are vaccinated – or in the UK where daily cases passed 50k for the first time since Jan, but relatively better placed given that 68% of the population are fully vaccinated (implying less hospitalization and death rates). Though many European nations were gearing up for summer tourists, some restrictions are back as many including Cyprus, Portugal, Spain and Netherlands are now in the list of code red countries (according to the European Centre for Disease Prevention). Meanwhile, the OPEC forecasts an increase in oil demand, reaching pre-pandemic levels by 2022. This could also seep into inflation numbers which are staying higher longer than expected (though still being labelled “transitory” by major central banks). Lastly, China’s latest GDP numbers and RRR cut indicate a relatively weak momentum – also seen in the latest readings of slowing investment.