Markets
Equity markets were mostly up last week (S&P posted the strongest gains in 3 weeks), with Asia ex-Japan the only major global index down from the previous week (the index hit a near 3-month low on Thursday). In the Middle East region, most indices were down with DFM the worst hit (falling on ex-dividend stocks) while Egypt had to suspend trading after indices fell following the accident on the Suez Canal. Among currencies, dollar rose to a 9-month high versus the yen during the week and the euro-dollar was lower given divergent Covid19 outlooks. Emerging market currencies took a beating also given the near 10% plunge in the Turkish lira. Oil markets were affected by the Suez blockade though given the OPEC+ meeting on Apr 1st, it seems to have settled for now.
Weekly % changes for last week (25-26 Mar) from 18 Mar (regional) and 19 Mar (international). 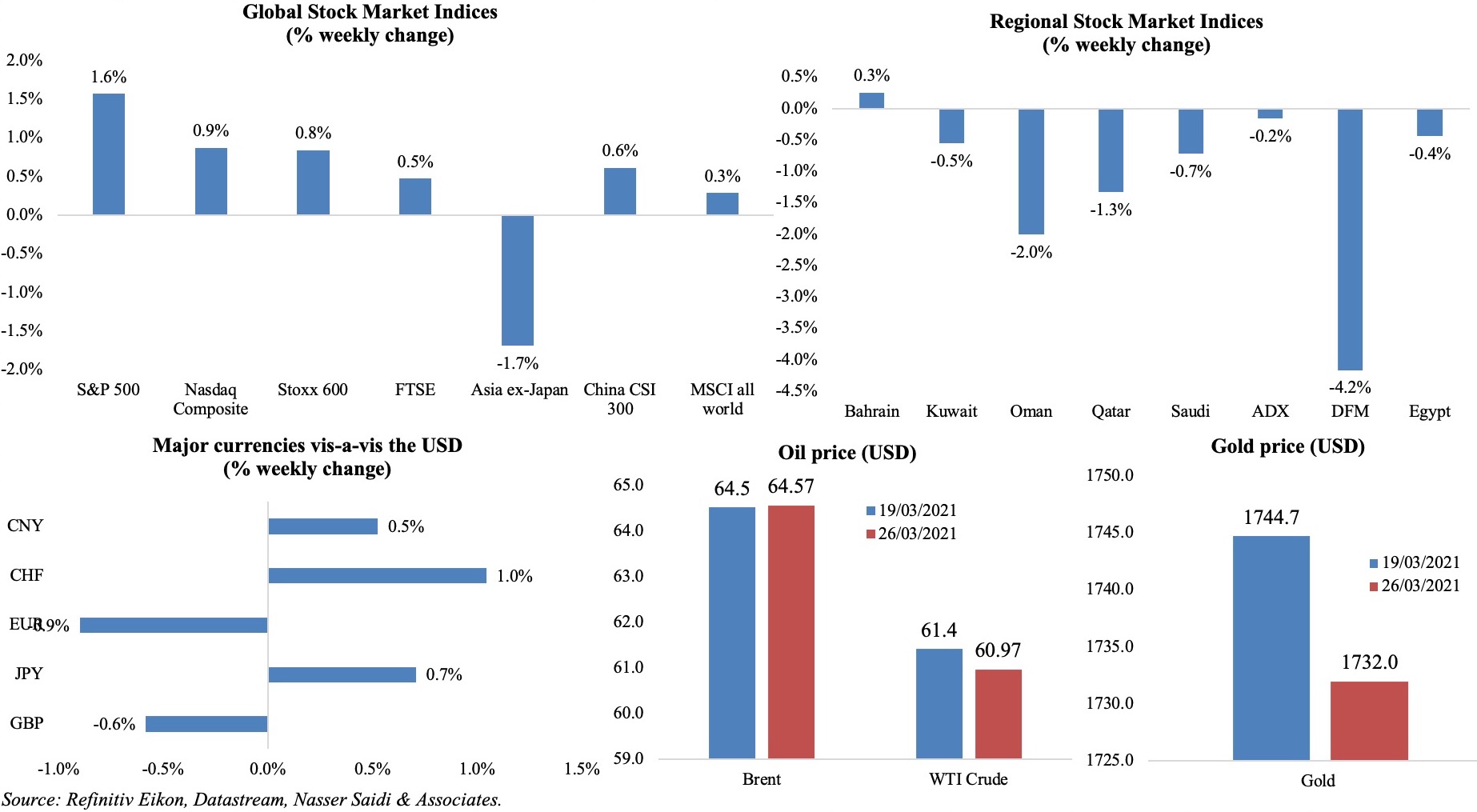 Bottom line: Covid19 continues to dominate headlines more than a year after it took over: Europe’s slow pace of vaccination and rising cases, as well as the surging numbers in Brazil and India, amid new “double mutant” Covid19 variants, underscore concerns to the pace of global recovery even as global vaccinations cross 500mn doses. Other major events adding to “economic uncertainty” are the fight for vaccines between the UK and EU, renewed China-US tensions, the Suez Canal’s 1-ship blockage as well as higher bond yields. The OPEC+ meeting scheduled for Apr 1st, and with both Saudi Arabia and UAE calling for the need to tread lightly, production is likely to be held steady.
Regional Developments

Dr. Nasser Saidi was interviewed on the recent banking and exchange rate developments in Lebanon

“Prospects for the Hydrogen Market: a MENA Perspective”, Keynote presentation at the Danish PtX Event, 5 Oct 2021

Dr. Nasser Saidi, in his capacity as the Chairman of the Clean Energy Business Council,

Interview with CNBC Arabia on restructuring of Lebanon’s banks, 4 May 2020

Dr. Nasser Saidi was interviewed on the restructuring of Lebanese banks under the government’s reform