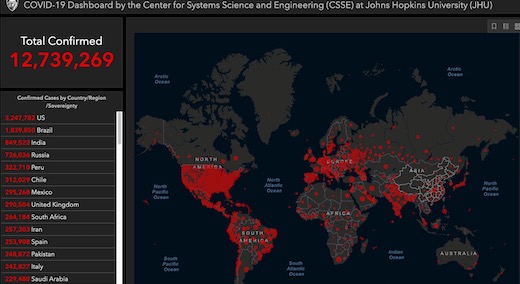 Main highlights from the Weekly Insights are: Google Mobility results from the MENA region as lockdown restrictions are phased out; a comparison of Bahrain’s Q1 GDP with its peers reveals interesting facts; as Kuwait proceeds with the expat quota bill, we look at how extensive remittance outflows are from the region.

Most global stock markets closed in the green last week (except for FTSE which closed 1% down in spite of the extra stimulus) as the virus count continued to rise and ahead of the Q2 earnings season. Chinese shares touched a 5-year high after state media called on local investors to pour money into markets; daily turnover soared by nearly 80% compared to a week ago. Regional markets were mostly up, with Oman and Abu Dhabi down by 0.5% week on week. Safe haven assets were in demand: US Treasury yields dipped to their lowest levels since late Apr while yield on the 10-year German Bund touched -0.5%; the yen rose against the dollar; gold prices hit a 9-year high, rising 1.3% versus a week ago. Oil prices increased on news of IEA raising its oil demand forecast, with WTI unchanged and Brent up 1% from the prior week. (Graphs in the last section.)
Global Developments
US/Americas:

Bottom line: Economic data improves across the globe: reiterating the need to be aware that the “recovery” is still far below the pre-Covid19 numbers. With the WHO reporting record daily surge in global Covid19 confirmed cases, it is time to reassess any cautious optimism related to recovery. This week look forward to details of EU’s  EUR 750bn post-Covid19 recovery fund ahead of the ECB meeting while UK was the latest to add GBP 30bn to its stimulus package: expect more as nations battle the outbreak, though global public debt is also rising – reaching its highest level in recorded history, at over 100% of global GDP, according to the IMF. Meanwhile, IEA nudged up its oil demand forecast raised its demand forecast to 92.1mn barrels per day (bpd), up 400k bpd from its outlook last month, though Covid19 still poses a risk (e.g. with easing of lockdown measures, fuel demand is slowly resuming in India, up 11% mom in Jun – still down 7.8% compared to a year ago).
Regional Developments

Fig 1. Google Mobility registers increase in activity as lockdown restrictions are phased out 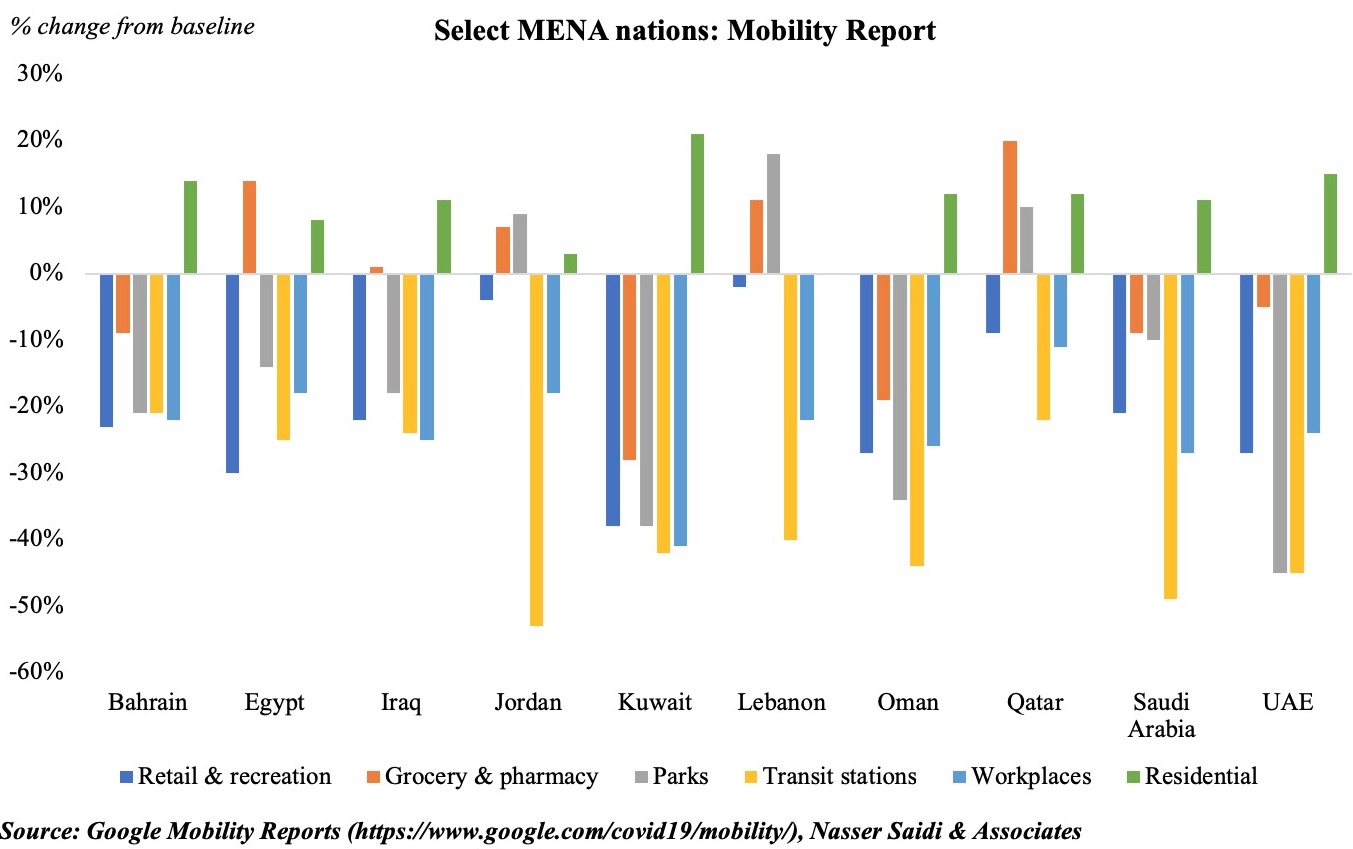 Notes: The reports show trends over several weeks with the most recent data representing approximately around June 9th. Changes for each day are compared to a baseline value for that day of the week: the baseline is the median value, for the corresponding day of the week, during the 5-week period Jan 3–Feb 6, 2020.More: https://www.google.com/covid19/mobility/

Covid19 confirmed cases in the Middle East and North Africa inch closer to 1 million, with GCC accounting for around 54% of the cases. All GCC nations have begun opening their economies in phases, and this is clearly reflected in the Google Mobility numbers: visitors to grocery and pharmacy are inching closer to (or surpassing) the period before the pandemic (see Qatar, Egypt, Lebanon, Jordan and Iraq) while the ‘residential’ category (which shows a change in duration of time spent at home) declined compared to a few weeks ago indicating that people are no longer as confined to home as during the lockdown period. Kuwait is still most restrictive in terms of employees returning to work (and hence a move closer to the baseline). Interestingly, the numbers for workplace in Saudi Arabia and UAE are still 27% and 24% respectively lower than the baseline. Recovery in retail and recreation is still below the baseline across the nations: the most divergence in Egypt and Kuwait and the UAE (in spite of Dubai’s shopping malls back to 100% operating capacity while theatres and recreation facilities open with social distancing measures).
Fig 2. Bahrain’s Q1 GDP: a quick comparison with Saudi Arabia and Dubai

Bahrain is the latest to release its Q1 GDP numbers, with overall GDP contracting by 1.1% and non-oil GDP falling by 1.7% yoy. In terms of sectors, it is no surprise that the hospitality and transport sectors were most hit, with passenger traffic restrictions in place since Mar. Q2 numbers are likely to be worse given the near-complete lockdowns. The oil sector continued to perform well, with its share of overall GDP at 17.2% in Q1.
In comparison to Saudi Arabia and Dubai GDP, the hospitality sector in Bahrain seems to be significantly more affected (-36% vs Dubai’s 14.8% dip). Also different was a decline in financial sector activity: drops of 1.6% and 1.1% in Q1 2020 and Q4 2019 respectively, versus Saudi Arabia and Dubai’s 1.0% and 0.32% rise in Q1 2020. Bahrain’s government sector witnessed a 2.9% drop in Q1, following a more severe 20.3% decline the quarter before: this is likely to be more significant in the coming quarters given ongoing fiscal consolidation efforts including the directive for ministries and government agencies to reduce spending by 30% this year.
Fig 3. Remittances across the GCC

The UAE is the second largest outbound remitter country in the world, with remittances touching AED 165.2bn in 2019, as per the latest annual report from the central bank. Though remittances in Q1 this year have been released only in Saudi Arabia and UAE (yet), both have posted a year-on-year increase. The Covid19 lockdown highlighted the transitory nature of work in the region. Job losses are forcing many skilled expat residents to leave the country given the linkages of the residency visa with jobs/ sponsors. Add to this lower oil prices, resulting in a substantial reduction in economic activity (with associated declines in salaries and/or job losses), it seems unlikely that there will be an uptick in remittances for the full year. The World Bank already estimates remittances globally to drop by 20% this year.
Considering the example of UAE, India was the top destination for remittances in Q1 this year, accounting for 37.8% of the total. With close to 500k Indians registered to leave on repatriation flights, a dip in remittances this year is inevitable. Saudi Arabia, where remittances have been declining since 2019, this year is unlikely to be any different – especially given the additional VAT hike and removal of cost of living allowances alongside a dip in overall economic activity. In Kuwait, meanwhile, if the expat quota bill is passed, close to 800k Indians might need to leave, thereby leading to a gaping hole in overall remittances to India.
On the other hand, allowing for a permanent residency program in GCC would attract and retain foreign human capital, which would generate significant economic gains (retained earnings, higher consumption levels, investments in the real estate sector etc.) for the domestic economy.
Media Review
What’s in a name? Banks count cost of loans in NMC collapse
https://www.reuters.com/article/us-nmc-health-administration-banks-analy/whats-in-a-name-banks-count-cost-of-loans-in-nmc-collapse-idUSKBN24B0MK
Fiscal policies for a transformed world
https://blogs.imf.org/2020/07/10/fiscal-policies-for-a-transformed-world/
Why Is the Fed Spending So Much Money on a Dying Industry?
https://www.nytimes.com/2020/05/28/opinion/fed-fossil-fuels.html
How NOT to Punish China
https://www.wsj.com/articles/how-not-to-punish-china-11594249525
Water wars is on the horizon in MENA: Nile Dam row
https://www.bbc.com/news/world-africa-53327668
Market Snapshot as of 12th Jul 2020
Weekly % changes for last week (9-10 Jul) from 2nd Jul (regional) and 3rd Jul (international). 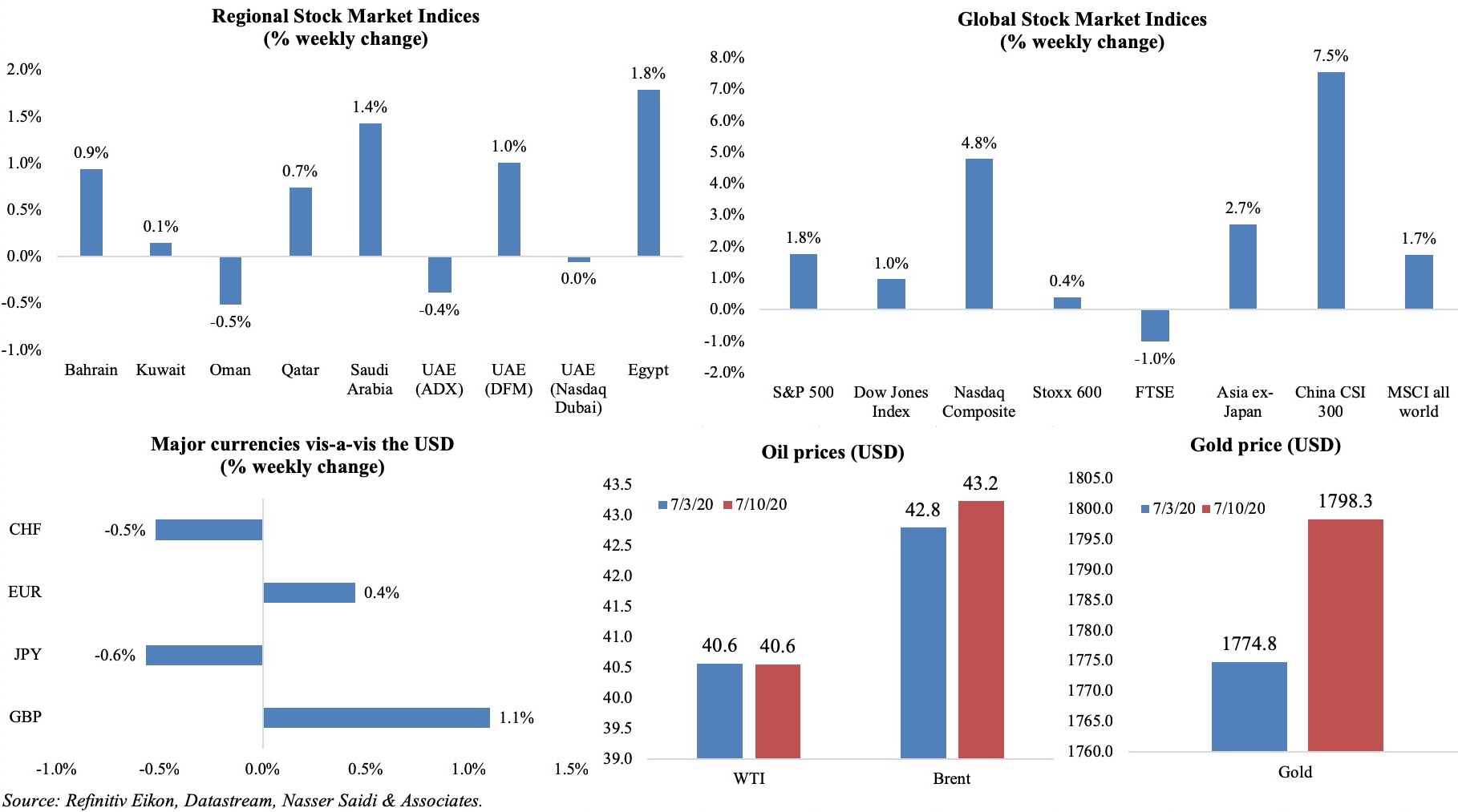