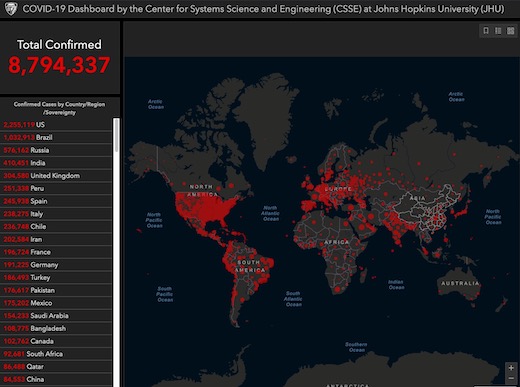 Weekly Insights: Charts this week focus on Google’s latest mobility reports, changes in US treasury holdings and FDI flows into the MENA region.
Markets
Stock markets performed well last week in spite of the spike in Covid19 cases as economic activity resumed with the easing of restrictions (& resurgence of cases in nations that had successfully “flattened the curve”) and given unprecedented liquidity support from central banks. Markets across Europe – Stoxx600, FTSE – gained on better than expected macro data as well as on expectations that the stimulus package would be passed soon. China’s stocks ended higher after Beijing pledged reforms and liquidity support. Regionally, most markets were up as economies gradually eased restrictions and kickstarted economic activity. UK pound had its worst week in a month against the dollar while the euro also edged down. Oil prices increased on reports of demand recovery while gold price was up almost 1% on safe-haven demand. (Graphs in the last section.)
Global Developments
US/Americas:

Bottom line: The WHO’s warning of a “new and dangerous phase” of the Covid19 pandemic, a potential second wave of Covid19 in many nations that re-opened (Germany, New Zealand, China, Iran to name a few) amid a surge continuing in many US states (US on Thursday recorded its largest one-day increase in coronavirus cases since early May) raises important questions regarding the pace of economic recovery. While central banks have reiterated liquidity support, there are signs of improvements in USD funding conditions – the ECB, BoE, BoJ and the Swiss National Bank stated that the frequency of their 7-day dollar funding operations (via the Fed’s swap lines) would be reduced to thrice a week instead of daily. Be prepared for central banks to exit stimulus measures should economies show signs of recovery and the pace of activity picks up faster than expected: Norges Bank signaled that rates could be raised as early as 2022. Meanwhile, UNCTAD estimates global FDI flows to plunge by 40% this year to below USD 1trn (for the first time since 2005) due to Covid19, with worse expected in 2021. Geopolitical risks are also on the radar – be it the clash between Indian and Chinese troops, tensions between South and North Korea or the contradictory messaging from the US regarding the trade deal (and wider “Cold War”) with China.
Regional Developments

Charts of the Week 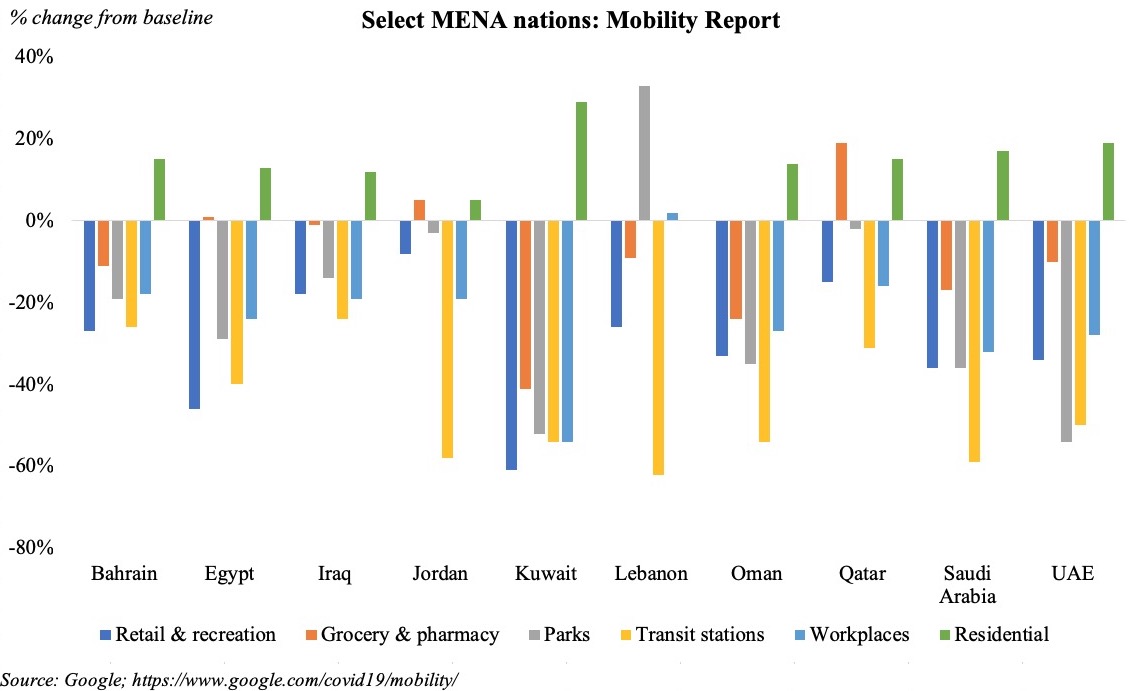 Notes: The reports show trends over several weeks with the most recent data representing approximately around June 14th. Changes for each day are compared to a baseline value for that day of the week: The baseline is the median value, for the corresponding day of the week, during the 5-week period Jan 3–Feb 6, 2020.
Covid19 confirmed cases in the Middle East crossed 645k, with GCC and Iran accounting for around 55% and 30% of the cases respectively. With restrictions easing, number of visitors to grocery and pharmacy are inching closer to (or surpassing) the period before the pandemic (see Qatar, Jordan, Egypt, Iraq, Lebanon UAE) while the ‘residential’ category (which shows a change in duration of time spent at home) has declined compared to a few weeks ago indicating that people are no longer as confined to home as during the lockdown period. Other than in Kuwait (which is still in Phase 1 of the recovery plan), more employees are returning to work (and hence a move closer to the baseline). Recovery in retail and recreation seems to be slower in comparison:  Kuwait is still 61% lower compared to the baseline while Egypt and Saudi Arabia are down 46% and 36% respectively.
Fig 2. Foreign Direct Investment in the Middle East and North Africa

Both UAE and Saudi Arabia witnessed a pickup in FDI last year while the West Asia region as a whole reported a 7% dip in FDI inflows (to USD 28bn). In the North Africa region, Egypt was the largest recipient – attracting USD 9bn in 2019 (+11% yoy). FDI inflows into the MENA region saw a sharp decline in 2009-10 (after a strong decade) a result of the financial crisis and regional turbulences (the Arab “Spring”) and hit lows again in 2015 during the period of declining oil prices. With the onset of the Covid19 pandemic, FDI inflows are likely to be negatively affected: the value and number of announced greenfield projects in Q1 2020 declined, by 56% yoy and 34%, respectively, compared with the quarterly average of 2019. The saving grace could be announcements of new infrastructure projects (to mitigate the impact of Covid19) and recent regulatory changes (e.g. permitting 100% ownership and easing of investor licenses in Saudi Arabia).
Fig 3. Saudi Arabia, Kuwait and Iraq are among the largest foreign holders of US Treasury securities; holdings are declining in most GCC nations

As oil prices stay low, recycling of petrodollars has reduced and there has been a substantial decline in holdings of US Treasury securities by Saudi Arabia. At USD 125.3bn in Apr 2020, its share has fallen to just 1.85% of total in Apr, from 2.74% a year ago. Decline in holdings are visible across all the oil exporting GCC nations (except Kuwait).
Media Review
IMF: The Great Lockdown through a Global Lens
https://blogs.imf.org/2020/06/16/the-great-lockdown-through-a-global-lens/
Six things to know about India-China economic relations
https://www.bloombergquint.com/economy-finance/six-things-to-know-about-india-china-economic-relations
JP Morgan’s roadmap toward an oil ‘supercycle’
https://www.arabnews.com/node/1690446
Covid-19 has squeezed migrants’ remittances to their families
https://www.imf.org/external/pubs/ft/fandd/2020/06/COVID19-pandemic-impact-on-remittance-flows-sayeh.htm
https://www.economist.com/finance-and-economics/2020/06/15/covid-19-has-squeezed-migrants-remittances-to-their-families
Saudi Arabia’s Peaking Virus Cases Aren’t Slowing Its Reopening
https://www.bloomberg.com/news/articles/2020-06-19/saudi-arabia-s-peaking-virus-cases-aren-t-slowing-its-reopening
Economic and Political War in Lebanon (Arabic)
https://www.independentarabia.com/node/114961
The Fallout of the War: The Regional Consequences of the Conflict in Syria
https://www.worldbank.org/en/news/press-release/2020/06/17/fallout-of-war-in-syria
https://openknowledge.worldbank.org/bitstream/handle/10986/33936/The-Fallout-of-War.pdf 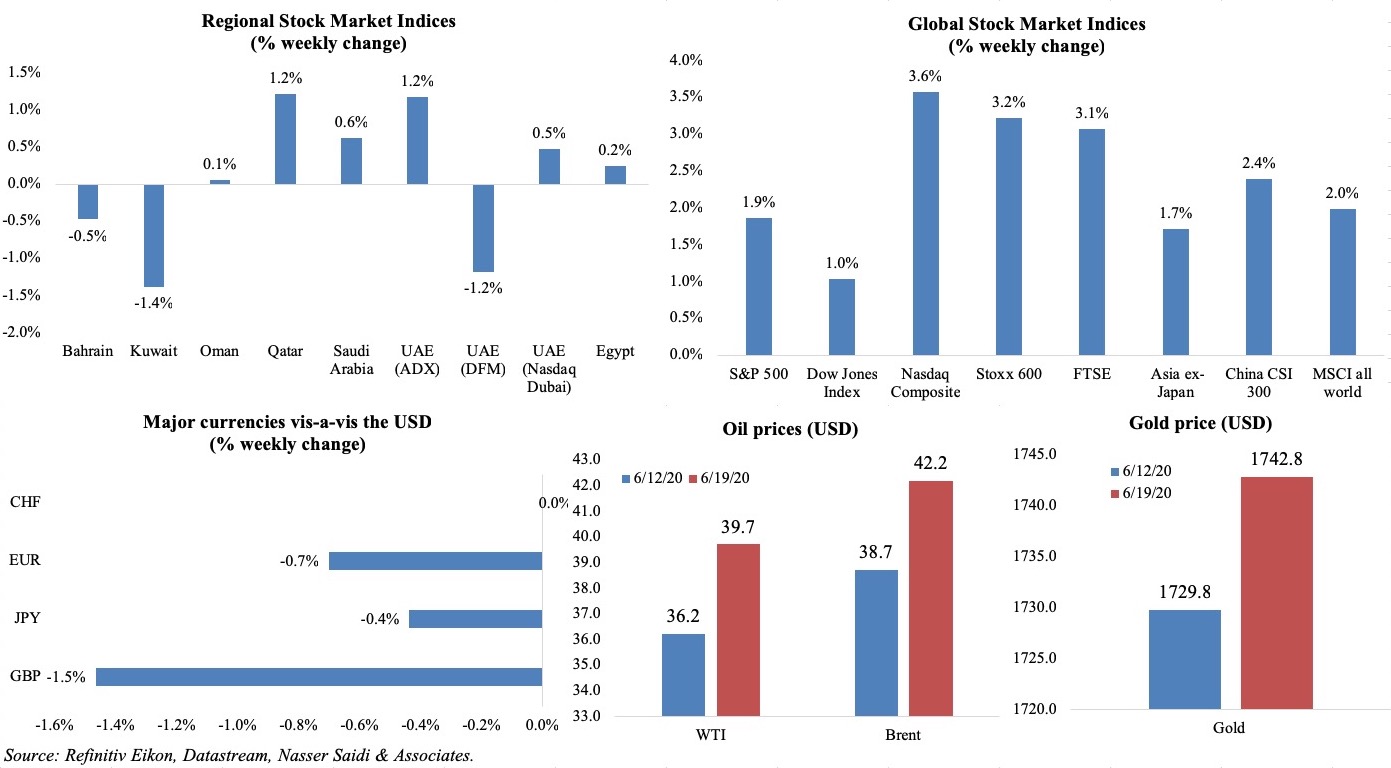