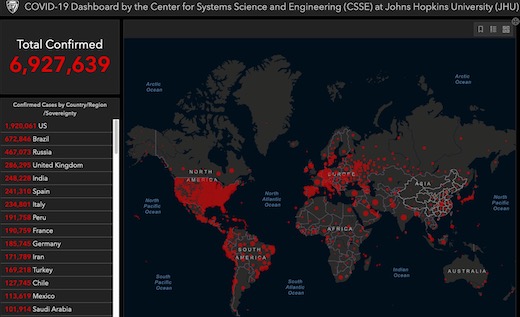 Weekly Insights: PMI releases dominated the news and our updated heat-map paints a not-so-rosy picture; some food for thought from an analysis of the UAE and Saudi Arabia’s latest credit and spending data.

Markets
Global stock markets continue to rally, holding near 3-month highs, with the US supported by the unexpected pickup in non-farm payrolls, while Asia and emerging market stocks posted the best weekly gains in 9 years. Regional markets were mostly higher as lockdowns were slowly eased and businesses reopened partially. The euro gained 1.7%, also touching the highest level since Mar 10th. Oil prices gained for a 6th consecutive week, on expectations of OPEC output cut amid recovering demand. Gold price declined for the 3rd consecutive week. (Graphs in the last section.)
Global Developments
US/Americas:

Bottom line: PMI numbers across the globe improved from record lows, as countries eased restrictions, though the outlook for the coming 12 months remains subdued. New export orders remain weak highlighting weak global demand alongside some respite in domestic orders. Stock markets continue to climb on hopes of a V-shaped economic recovery (that businesses are not yet anticipating) and more central bank stimulus. While easing restrictions have seen work-related domestic travel resume as well as retail activity, a key point to watch out for is spending patterns i.e. are households back to spending at pre-Covid19 levels or are they saving on worries about jobs/ economic uncertainty? US data has already shown an increase in personal savings to a historic 33% high in Apr, in spite of the one-time payment of USD 1200 from the government. The Fed meets this week and investors are likely to look for some guidance after the latest payrolls surprise to the upside.
Regional Developments

As nations ease restrictions and lockdowns, economic activity is slowly picking up: this is evident from the latest PMI numbers out of Europe, Asia and the Middle East (below). While China is still the only nation reporting growth (i.e. above-50 mark), Japan remains an outlier by reporting worse than Apr numbers last month. The main factor of concern for businesses remain the Covid19 pandemic though in the Middle East, respondents were also concerned about the rising US-China tensions. Global trade is forecast to decline by a record 27% in Q2 this year, according to UNCTAD, as exports slump.
Chart 1: Heatmap of Manufacturing/ Non-oil sector PMIs – the Covid-19 effect 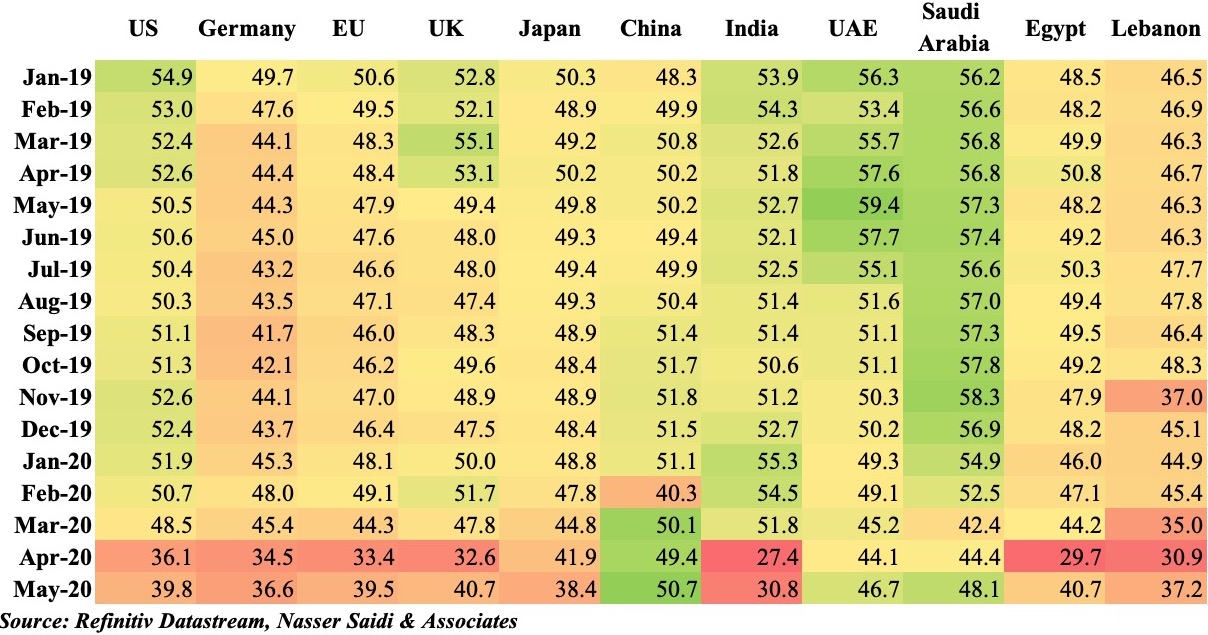 The UAE central bank released its latest monthly statistics with data for Apr. The two panels above indicate the sectors banks lend most to: not surprisingly, the business and industrial sector for about 50% of total loans disbursed in Apr this year. However, the monthly change shows an interesting picture: the public sector entities (i.e. state-owned enterprises/ GREs) have seen an 8%+ mom increase in loans in both Mar and Apr. While the central banks announced multiple stimulus packages to the benefit of businesses (and more specifically to SMEs), it does not seem to have filtered down to the intended recipients, as loans to both the business and industrial sector as well as retail declined in month on month terms (-0.5% and -1.2% respectively).
Chart 3. Saudi Arabia’s spending patterns during the Covid19 outbreak

Lockdowns in Saudi Arabia have pushed both point-of-sale (PoS) transactions and cash withdrawals from ATMs to double-digit year-on-year declines in Apr: movements have been restricted and online shopping has been picking up versus visits to shops/ malls. Breaking down PoS transactions by sector, only the “food and beverages” and “health” show an increase during the lockdown. As restrictions are lifted from this month, we can expect a slight rebound (e.g. white goods), especially as VAT is also scheduled to increase to 15% (from 5% currently) from Jul. In the months prior to the introduction of VAT in 2018, there was a significant increase in the PoS transactions in electronic devices, furniture, jewelry as well as construction and building materials. In comparison to 2017-18, this month’s uptick (if any) might be relatively muted given the pressures on cost of living – customs fees on various products are also scheduled to rise from this week.
Media Review
Deglobalization Will Hurt Growth Everywhere
https://www.project-syndicate.org/commentary/deglobalization-threat-to-world-economy-and-united-states-by-kenneth-rogoff-2020-06
The Long Economic Hangover of Pandemics
https://www.imf.org/external/pubs/ft/fandd/2020/06/long-term-economic-impact-of-pandemics-jorda.htm
Bank of England Says Lenders Must Prepare for No-Deal Brexit
https://www.bloomberg.com/news/articles/2020-06-03/bank-of-england-tells-lenders-to-prepare-for-no-deal-brexit
The world must seize this opportunity to meet the climate challenge
https://www.theguardian.com/commentisfree/2020/jun/05/world-climate-breakdown-pandemic

Market Snapshot as of 7th June 2020
Weekly % changes for last week from 29th May (international) and 28th May (regional). 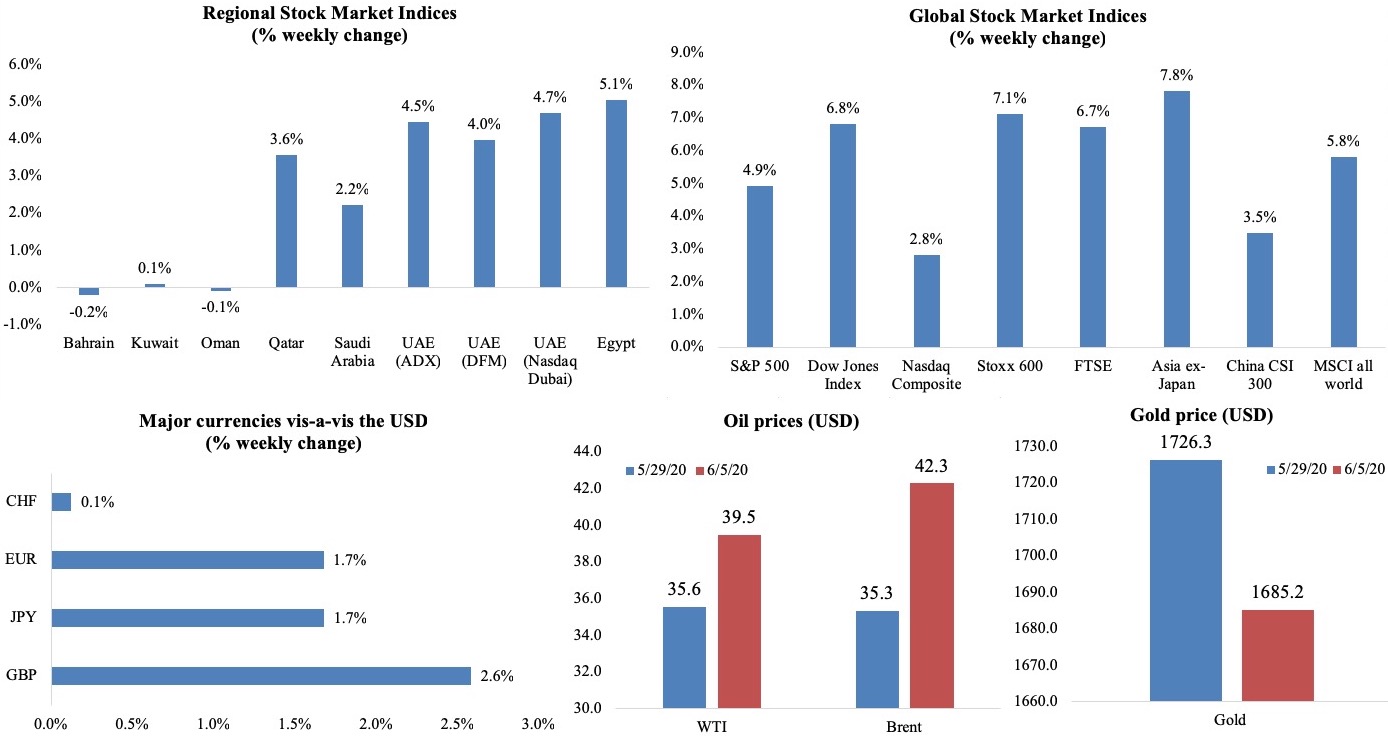