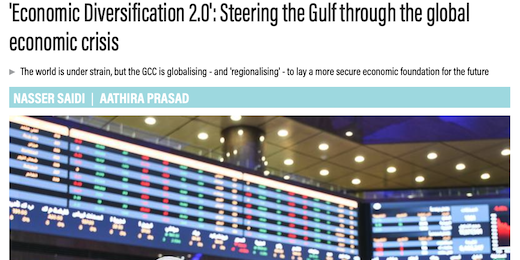 The op-ed by Dr. Nasser Saidi and Aathira Prasad, titled “‘Economic Diversification 2.0′: Steering the Gulf through the global economic crisis“, appeared in The National on 15th Nov 2022 and is reposted below.

‘Economic Diversification 2.0’: Steering the Gulf through the global economic crisis

The world is under strain, but the GCC is globalising – and ‘regionalising’ – to lay a more secure economic foundation for the future

The Mena region displays divergent recovery patterns in the post-Covid era, with oil exporters growing at a relatively faster pace. But a global economic downturn is looming. What are the priorities for the region’s financial community?

Medium and long-term risks in Mena (like climate change and regional conflicts) notwithstanding, the GCC, largely recovered from Covid-19, should shift on to an “Economic Diversification 2.0” path. While the so-called “Gulf falcons”, the UAE and Saudi Arabia, are the frontrunners with regard to actively diversifying away from oil, future growth prospects require a focus on the “new economy”, in addition to the “old” non-oil sectors (like tourism, infrastructure and logistics) that supported the “Economic Diversification 1.0” phase. But moving to a new diversification path necessitates new tools and investments.

There are multiple drivers of Economic Diversification 2.0. First, the new economy (including industry 5.0, the Internet of Things, AI, blockchain, FinTech and virtual assets) should be supported by an enabling set of investments and policies. This includes a broad-based embracing of the digital economy, in addition to increased investments (both domestic and regional) from the region’s financial markets and sovereign wealth funds (SWFs), which are able to deploy more than $3 trillion in liquid wealth.

This should go in tandem with developing and deploying countercyclical monetary and fiscal tools and policies. The International Monetary Fund estimates that the region’s oil producers could accumulate around $1tn in oil windfalls between 2022 and 2026. These funds should be used to secure fiscal sustainability, a move that has already been evident in the recent months with most GCC nations avoiding the temptation of increased spending. While reining in spending, policymakers could also use this opportunity to mobilise non-oil revenues and phase out costly generalised subsidies in favour of cash income transfers and targeted subsidies.

Liberalisation and structural reforms go hand in hand with the above-mentioned policy tools. This includes labour market reforms (like long-term residency and incentives to raise female labour force participation rates), alongside encouraging more private sector activity and accelerated capital market development. Last but not least, policies that support regional economic integration should be encouraged by accelerating the outward orientation of trade and investment policies towards Asia and Africa, other Arab countries, and the development of the Red Sea Basin, among others.

As the GCC embarks on Economic Diversification 2.0, financial markets need to be the handmaiden of growth and become an enabler of economic transformation. The low hanging fruit is the use of government debt markets to finance infrastructure and development projects as well as smooth volatile government finances. Government debt markets can become a growing source of funding to diversify away from reliance on bank financing, especially for long-term projects.

Structural change requires growing the role of the private sector. The UAE and Saudi Arabia are already undertaking a concerted push towards the privatisation of certain state-owned assets and enterprises to de-risk fossil fuel assets, with the advantages of raising revenues, diversifying financial markets, and attracting foreign investment. Recently enacted public-private partnership laws will also encourage privatisation, attract new tech and innovation and foster job creation. Financing mega projects and infrastructure via capital markets, and more efficient management of public assets will boost the development of broader, deeper and more liquid capital markets, also enabling the region’s SWFs to more efficiently manage their growing wealth and domestic assets, thereby increasing financial access and deepening. Indeed, the SWFs are recalibrating their asset allocation to focus on the region to drive growth. As a case in point, Saudi Arabia’s PIF plans to invest $24 billion in six Arab nations.

The ongoing global energy crisis, along with technological innovation lowering the cost of renewables, has created the conditions for a new global energy map. Alongside the GCC’s existing energy linkages with Asia, new links can now be forged with Europe for gas and green/ blue hydrogen. These structural changes should be supported by a multi-faceted energy transition strategy by the region’s oil producers that includes focusing on renewables, clean energy, clean technology, hydrogen and nuclear projects in light of their net-zero emissions commitments. The path to achieving the region’s ambitious renewable energy targets will require massive investments, which can be financed by the issuance of green bonds and Sukuks in the regional markets and by creating dedicated “green banks” and “green funds”.

For digitalisation to transform the region’s economies, investments will be required in disruptive technologies and digital payments, in addition to financing digital infrastructure to expand the reach of the digital economy. Many GCC governments are already on the forefront when it comes to adoption of digital technologies: be it e-government or embracing blockchain technology in the public sector or digital currencies (for instance, Project Aber, created by the central banks of the UAE and Saudi Arabia). The region’s financial regulators and capital markets led by the Gulf Falcons are embracing FinTech and crypto assets. Supporting mainstream digital solutions like MedTech, AgriTech and EduTech will increase the pace of digitalisation, assisting economic transformation.

The global political economy is under strain. The GCC has an opportunity to benefit from global decoupling and fragmentation by its unfolding “regionalised globalisation” strategy, driving and supporting regional economic integration. A growing number of free trade agreements are linking new economic partners and strengthening existing relations, while tools like foreign aid, finance of regional trade, building and sharing the services of infrastructure facilities as well as FDI and portfolio investments are transforming and improving the growth and development prospects of a broad GCC-connected region, including Mena, East Africa and Asia.