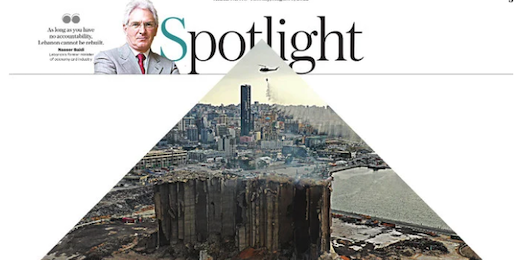 “Lebanon is the greatest Ponzi scheme in economic history,” Nasser Saidi, a Lebanese politician and economist who served as minister of economy and industry and vice governor for the Lebanese central bank, told Arab News.

Unlike financial crises elsewhere in the world through history, Saidi said the cause of Lebanon’s woes could not be pinned to any single calamity that was outside the government’s control.

“In Lebanon’s case it was not due to an actual disaster, not due to a sharp drop in export prices in commodities, it is effectively man-made.

“The World Bank talks about Ponzi finance, and they are right to point to the fact that you have two deficits over several decades. One was a fiscal deficit brought on by continued spending by the government more than revenues.

Since the end of the civil war, Lebanon should have been undergoing a period of reconstruction. However, spending on such infrastructure projects remained low, with the money seemingly siphoned off elsewhere.

But it was not just material infrastructure of this kind that was neglected. Institutions that would have improved and solidified governance, accountability, and inclusiveness were also ignored, leaving the system vulnerable to abuse.

“Whenever you go through a civil war, you need to think about the causes of the war, and much of it was due to dysfunctional politics, political fragmentation, and the break-up of state institutions,” said Saidi.

Lebanon’s “Ponzi scheme” was also driven by current account deficits and the overvalued exchange rate caused by the central bank policy of maintaining fixed rates against the dollar.

In economics, said Saidi, this is what you called the “impossible trinity,” meaning that a state could not simultaneously have fixed exchange rates, free capital movements, and independence of monetary policy.

“If you peg your exchange rate, you no longer have any freedom of monetary policy. Lebanon’s central bank tried to defy the impossible trinity and tried to maintain an independent monetary policy at a time in which the exchange rate was becoming more and more over-valued.”

The World Bank report calls for a comprehensive program of macro-economic, financial, and sector reforms that prioritize governance, accountability, and inclusiveness. It says the earlier these reforms are initiated, the less painful the recovery will be for the Lebanese people. But it will not happen overnight.

And although Lebanon held elections in May, propelling several anti-corruption independents to parliament, Saidi doubted their influence would be enough to drive change.

“Some 13 new deputies entered parliament, but they are unlikely to make the changes that are required,” he said. “Politically, business continues as usual. There is a complete denial of reality.”