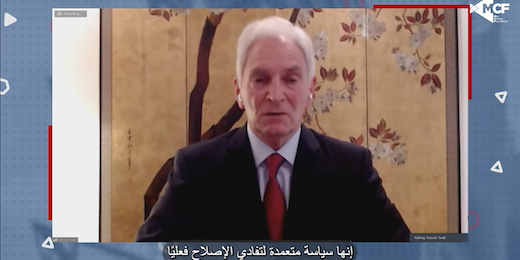 At the beginning of the discussion, the floor was given to Dr. Nasser Saidi, who started the panel, saying, “The truth is that what is happening in Lebanon has historical dimensions, and the GDP decline since 2018 by about 58 %, exceeds the biggest crisis we have known previously, which was in Chile in 1926. So this is a huge drop. In the gross domestic product, and multidimensional poverty now affects 80 percent of the population and the unemployment rate is up to 50 %, and there is a mass immigration, and thus this leads to a loss of our human capital. The value of the Lebanese pound has fallen by more than 85 %. The economy is in danger right now.

So, you can imagine the impact of this on people’s daily lives, but the most dangerous of that is the destruction of wealth, inflation, the depreciation of the exchange rate, and what people call as a eupherism, “Lolar”, and the haircuts actually mean that financial wealth as well as other forms of wealth in Lebanon decreased by about 85%. This is the wealth of several generations whose money was introduced into Lebanon. The terrible thing about this situation is that it’s man-made, it’s not the result of a natural disaster, it’s man-made and it’s a deliberate policy to actually avoid reform.

And he continued: We need a comprehensive approach because the problem is financial, there was a large financial deficit, which led to a large accumulation of debt, exceeding 175% of GDP, there was a large current account deficit, i.e. overuse, and this was allowed by stabilizing Exchange rate It is a long-term policy of the Central Bank which has allowed us to consume far more than we can afford.

This led to unsustainable deficits, current account deficits and fiscal deficits and these problems exploded effectively at the beginning of 2020 and the implosion was driven by the closing of the banks in October and November 2019. This was unprecedented and created a loss of confidence in the banking system and thus led to a rush to banks, which in turn led to the suspension of payments and the prohibition of deposits in Lebanese pounds and later in dollars as well. The result is indeed an economic and financial crisis, but it must be emphasized that it is also a political crisis and a deep governance crisis. Now, we are living in an educational and health crisis and of course public services have been severely affected as well as electricity and water. Most people do not get two hours of electricity a day. There must be accountability for what happened, and that accountability must also extend to other events that occurred, such as the explosion in the port of Beirut.

To this day, no one has been held accountable, either politically or economically.

And he stressed that there is a need to think about solving the economic, banking and financial crisis as a fundamental solution. And the banking system is at the heart of that so, from now on, what is needed is multidimensional solution. The public debt must be restructured, because the government can no longer amortize the debt. We have three interconnected budgets resulting from the crisis. They are the balance sheet of the government, the banks and the balance sheet of the Banque du Liban, these three are interconnected, and you cannot solve one without the other, so the central bank must also be restructured, starting with a legal audit. This should lead to a restructuring of the banking sector.

We will not be able to move forward in terms of rebuilding the economy and restoring confidence if we do not tackle the core of the problem, which is the banking sector.

When asked whether he believed that the banking sector would survive in Lebanon, he answered: If he wants the private sector to play its role, then it will need the banking and financial sector to finance it, and it will also need external financing. The plan first is to restructure the banking system and we said we need banking decision authority which means we will have to look at mergers and acquisitions and liquidations of some banks, maybe 50% of the banks will disappear but the main point is that we need to recapitalize. Bank shareholders need to understand that they have lost their capital, so we will need to bring in about 20 billion into the recapitalization of the banking system by the shareholders and the bankers themselves.

Secondly I think we need to restructure the central bank, my radical suggestion is that we should change the “Banque du Liban” to something like the Swiss National Bank.

A Swiss National Bank is a company incorporated by number of shares under a monetary law, but is also owned by the public. Owned by part of the government, but also by the public. And it’s a registered facility, so what we’ll do next is turn it into a joint stock company, the monetary policy will also exist independently. But then depositors can become shareholders in banks and in the central bank.

So, if we had a new central bank, which is very similar to the NSB. I think we would start heading towards a solution.

Thirdly, a National Wealth Fund must be established, whereby state-owned companies, government lands and institutions are part of the National Wealth Fund which is managed independently. It will enable us to improve governments, remove politicians, and take over a lot of state-owned assets from communications to water and electricity and the rest. It must be managed efficiently and independently as it should, as in Temasek in Singapore which bought an average of fifteen per cent for the government.

So, if we put all of that together and start running it efficiently, we can start to reap some revenue in the future. Then the depositors will also become part of the national wealth.

So, instead of experiencing the huge losses that we have now, the depositors will become shareholders in banks, shareholders in the central bank, and shareholders in National Wealth Fund. And if we have a properly structured and governed wealth fund, we can attract a lot of private capital and then we can hope, if we restructure our banking sector by starting to finance the private sector.

I think these are three building blocks that if we really want to solve Lebanon’s problems, we have to think about them.