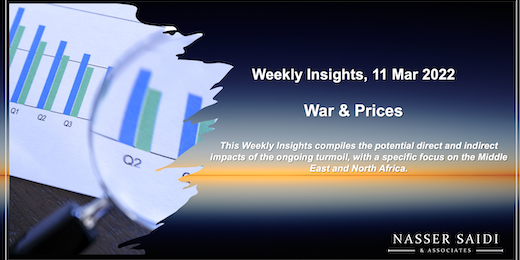 Two weeks since Russia’s Ukraine invasion, stock markets rallied and commodity prices retreated on Wednesday: it seems to have been a short breather (as diplomatic talks continue, so far inconclusive) with markets dragged down again on Thursday as investors expect monetary policy tightening. The S&P 500 dropped by 0.4% (after rising by 2.6% on Wednesday,  the largest one-day gain since June 2020) while Europe’s Stoxx600 lost 1.7% (after recording its biggest rally since Mar 2020 the previous day). Risk sentiment seems to have improved and the CBOE volatility index (VIX) came down from near 17-month highs to around 30 (vs 16 in the start of the year).

In this Weekly Insights piece, we compile the potential direct and indirect impacts of the ongoing turmoil, with a specific focus on the Middle East and North Africa.

First and foremost, the conflict comes at a time when the global economy was recovering from the recent Omicron wave amid rising inflation. While the ongoing conflict will lead to a stalling of  global economic growth, the immediate impact is already visible in Russia: the financial sanctions (being cut off from the SWIFT bank messaging system) has already led to a record-low ruble and a spike in prices. The ruble has sharply dropped by around 30% (since Feb 24th) while inflation jumped to 10.24% as of Mar 4th (from 9.05% as of Feb 25th). Big foreign corporations are exiting the country – the latest announcement from McDonald’s saw massive crowds and queues in the final hours before it closed (as was seen in IKEA before). The Russian economy could see a massive drop in GDP -a 10-15% yoy drop is likely – though it could worsen if the conflict drags on further and the country is cut off from SWIFT). At the global level, two effects – a drop in GDP growth, rise in commodity prices and an increase in inflation (around 1%).

Oil prices have sharply increased  (reaching a near 14-year high): it rose by 5% yesterday after a 17% plunge on Wednesday after Biden’s request to US shale oil producers to increase supply (“do whatever it takes”) and UAE’s ambassador to the US stating the possibility of “encouraging OPEC to consider higher production levels” (though UAE’s energy minister later reiterated the nation’s commitment to the existing output agreement). For now, the US has announced a ban on Russia’s oil, LNG and coal imports: with only about 8% of US oil imports coming from Russia, the ban is likely to have a limited impact. The UK plans to phase out Russian oil by end-2022. If other allies also join in this ban of energy imports, it could lead to a severe gap that might be difficult to replace on short notice. If this happens, prices could remain quite high, stifling demand. On the other hand, the oil price could be tamed if other potential sources of supply come online (together). This includes additional oil released from the strategic petroleum reserves (already released 60mn barrels, 4% of total reserves), Iran’s oil (subject to an agreement in the ongoing nuclear negotiations), US shale producers and spare capacity among a few OPEC members (e.g. Saudi Arabia and the UAE).

For the MENA region, higher oil prices will benefit the oil exporters: these nations will see an uptick in oil revenues and potentially move fiscal and current account balances into the green (after being in the red during the past two years). While many of them are food importers, their dependence on Russian and Ukrainian wheat and/or sunflower oil is lower than the likes of Egypt and Tunisia. In Lebanon, which is already reeling from the domestic multi-dimensional economic, financial, social and political crises, higher food and fuel prices are translating into a sharp impact on the purchasing power of wages  (already affected by the distortion in exchange rates). Even the UAE, where oil prices were liberalized in Aug 2015, saw fuel prices rise by 10-11% mom in Mar taking it to above AED 3 per liter for the first time ever (which then spills over into transport and food costs).

The commodities price surge saw a reversal with the CRB commodity price index falling to the lowest level since March 3rd (the index is up 25.43% since the start of the year). Food prices have been increasing, as have metals prices. The FAO food prices index rose to an all-time high in Feb, driven by an uptick in vegetable oils (8.5% mom).

Ukraine has banned export of several food products, and this could lead to shortages and price rises. Supply interruptions or stoppages would significantly affect impact the Middle East and North Africa region, which is one of the largest consumers of wheat, with a heavy reliance on imports. Egypt is the one of the largest global importers of wheat, and disrupted supply could lead to either to a phase out of the bread subsidy (to ease subsidy bill and fiscal deficit). With Ukraine the largest exporter of sunflower oil (now in short supply) interruptions are driving up prices of substitutes (like palm oil, which hit record highs in the futures market), all driving up food-price inflation. In this regard, the World Bank has already issued a warning that food security concerns may worsen and lead to social unrest, reminding of similarities prior to the Arab Spring. 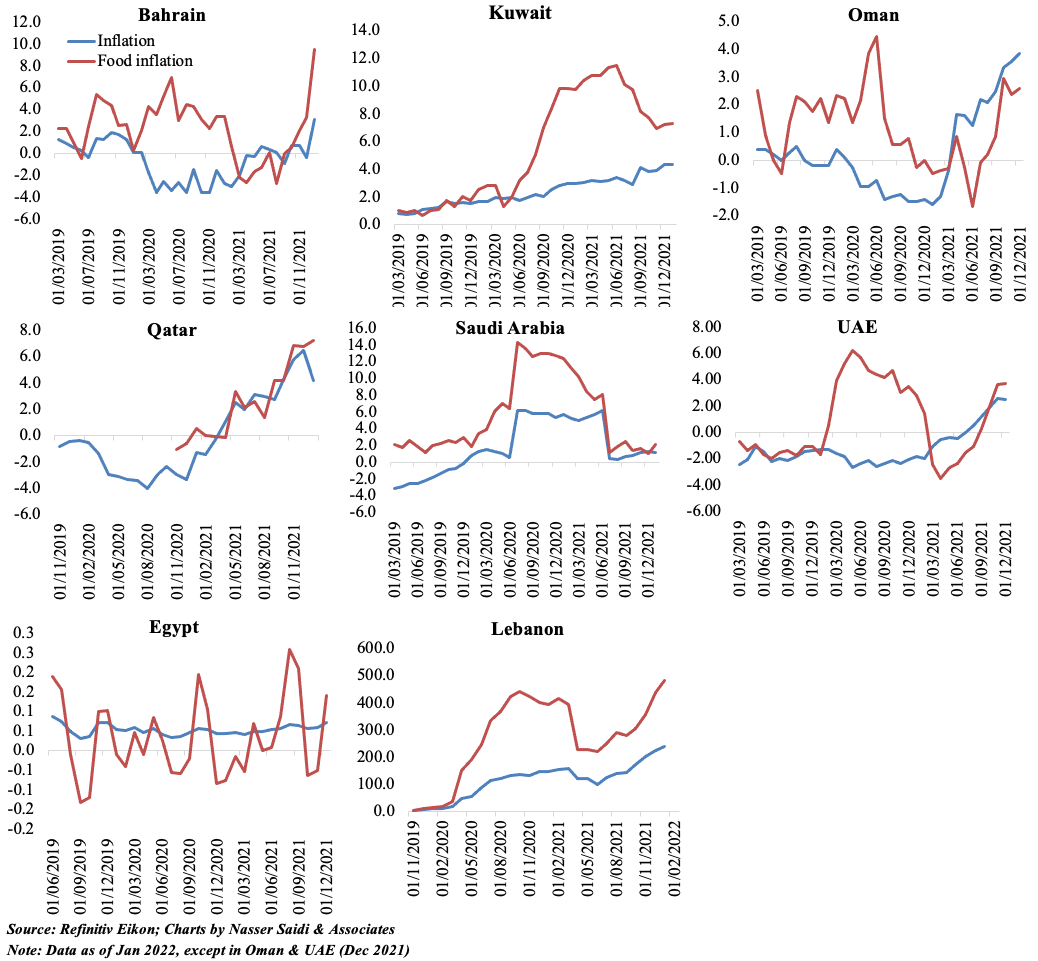 A setback for clean energy? Close on the heels of commitments to Net Zero Emissions (NZE) targets (even in the Middle East) comes the current crisis that is leading to increased production in the US (which was planning an ambitious move to cleaner energy). With high gas prices, some European nations are being advised to burn coal to counteract the dependence on gas from Russia. For now, Middle East nations are continuing with their plans for hydrogen plants and issuing green bonds indicating that the interest to gradually transit away from oil hasn’t waned (revenues from oil could be invested into clean energy projects, either domestically or overseas). Separately, as fuel prices rise, there might be an interest to switch to electric vehicles. However, with aluminum, cobalt and nickel key components in such cars’ batteries (among others), it might not be as cost-effective given the recent prices (nickel prices are almost 5 times higher than in start of 2022). If EV subsidies are offered to offset rising costs, countries could still crawl towards their clean energy targets.

In the backdrop of rising prices, supply chain disruptions and Covid-19 related bottlenecks will intensify further and disrupt global trade if the current situation in Ukraine remains unresolved for longer. Closure of Russian airspace adds to existing congestion in ports, and more than 100 merchant vessels are reportedly stuck in Ukraine where operations have been suspended in many ports. Simultaneously, flight restrictions on entering Russian airspace and expensive jet fuel are also driving up air freight prices. Japan’s ANA and JAL had to cancel flights to Europe (together, the two airlines operated about 60 flights per week to Europe); now JAL is taking the longer Polar route (and burning more jet fuel) to and from these European destinations. According to IATA, the Europe-Asia market accounted for 20.6% of all international cargo ton kilometers (CTKs) in the past 12 months, with a further 2.2% for the Within Europe routes (Russia included). This disruption, along with higher freight costs, will eat into businesses profits. If the Asia-Europe cargo is re-routed via the Middle East, it may support cargo capacity recovery in the region. Passenger demand for air travel will  be negatively affected if airlines pass on higher fuel costs to the consumer.

The bottom line hence is whether an oil exporter or importer, none of the MENA nations can escape an uptick in overall inflation. For now, as the geopolitical turmoil continues unresolved, inflation is likely to persist. This would  likely dampen domestic demand and consumer spending, much needed to support economic recovery in the post-Covid era. Even after the conflict ends, there is likely to be a  time lag before commodity prices drop to pre-war levels.

Rising inflation and slowing growth (or “stagflation”) is likely to enter discussions of major central banks as they meet to discuss rates. Tightening monetary policy remains  on the cards; should the commodity price surge continue, nations with fiscal leeway could offer some stimulus/ rebates. Most currencies in the GCC are pegged to the dollar – which is likely to remain strong as the crisis continues. Already, the equity markets of the oil exporting nations are outperforming their global counterparts and this is likely to be the case as energy prices stay high.

Other than Russia-Ukraine and rising commodity prices, the other news that remained in the limelight was the celebration of international women’s day on March 8th. Amidst the campaign theme of #BreakTheBias and trending hashtags, and celebrating recent jumps in the score of many Middle East nations (albeit from a low base) in the World Bank’s Women, Business and the Law report, it is worthwhile to remember the ground realities: high female unemployment rates and low labour participation rates are pervasive in the MENA region (Source: World Bank), and one that needs practical solutions. 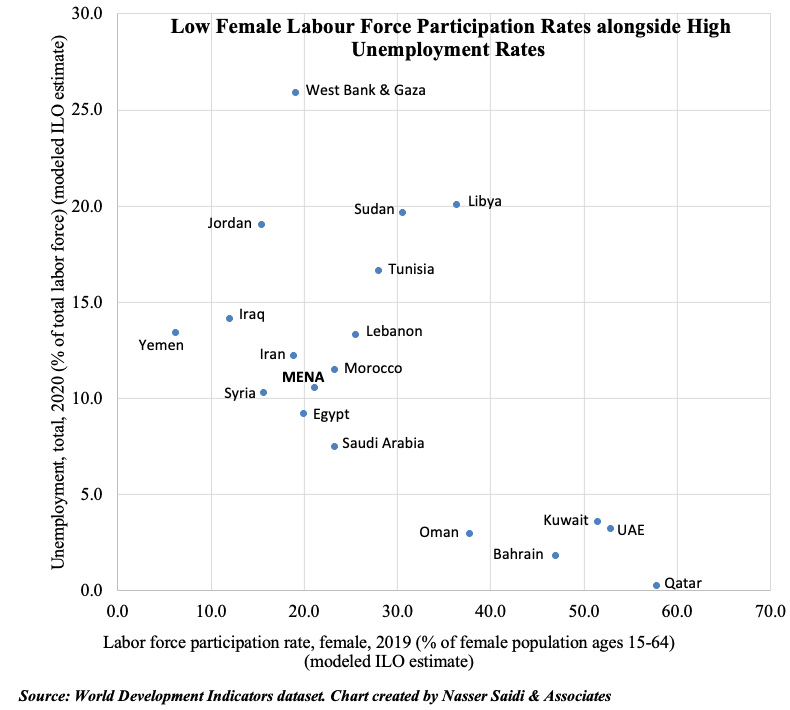 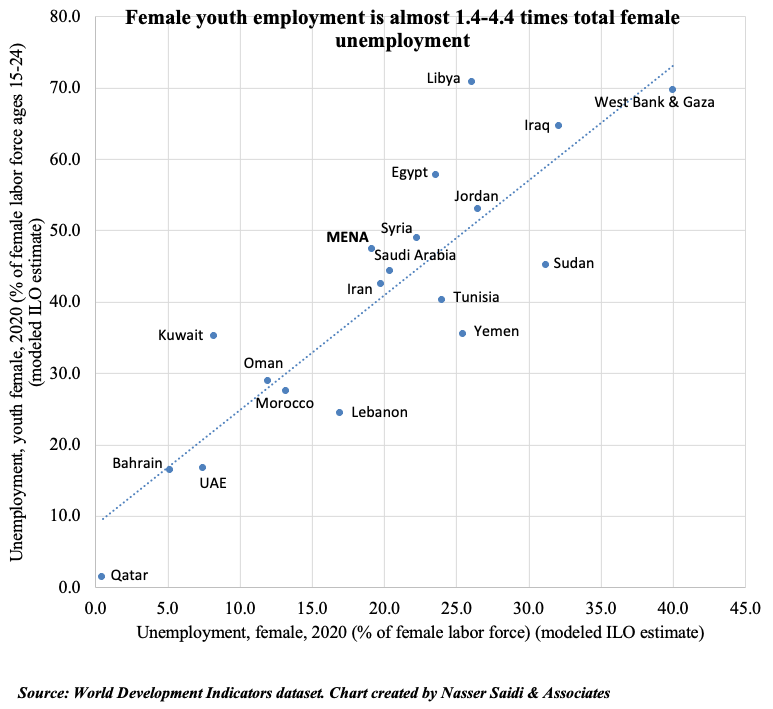 At the risk of repeating ourselves, we highlight a few policy initiatives to encourage women back into the workforce post-Covid: