Markets
Strong corporate earnings brought cheer to global markets, even as inflation pressures remain unabated. In the US, S&P 500’s gains (best week in almost 3 months) were driven by industrial and financial groups, while in Europe’s Stoxx600, banking, energy, and tech stocks supported the jump (recording the best week in nearly 7 months, and banks began to trade at pre-pandemic levels). The MSCI Asia Pacific ex-Japan posted the best weekly gain since late Jun while Japan’s Nikkei gained thanks to tech stocks performance. On Friday, the MSCI all-world index posted the biggest daily rise since May 14th. Regionally, most markets were up compared to a week ago, thanks to rising oil prices, with Egypt recording a 4.5% jump. The yen touched its lowest levels since Oct 2018 while sterling’s gain was supported by a weaker dollar and expectations of BoE rate hikes this year.  Oil prices rose to a 3-year high of more than USD 85 a barrel given an expected oil supply deficit in the backdrop of easing travel restrictions and ahead of the winter months. Gold price increased to the most in 7 months last week, before dropping slightly lower to end the week at USD 1766.82 (+0.6% from a week ago).
Weekly % changes for last week (14 Oct – 15 Oct) from 7 Oct (regional) and 8 Oct (international). 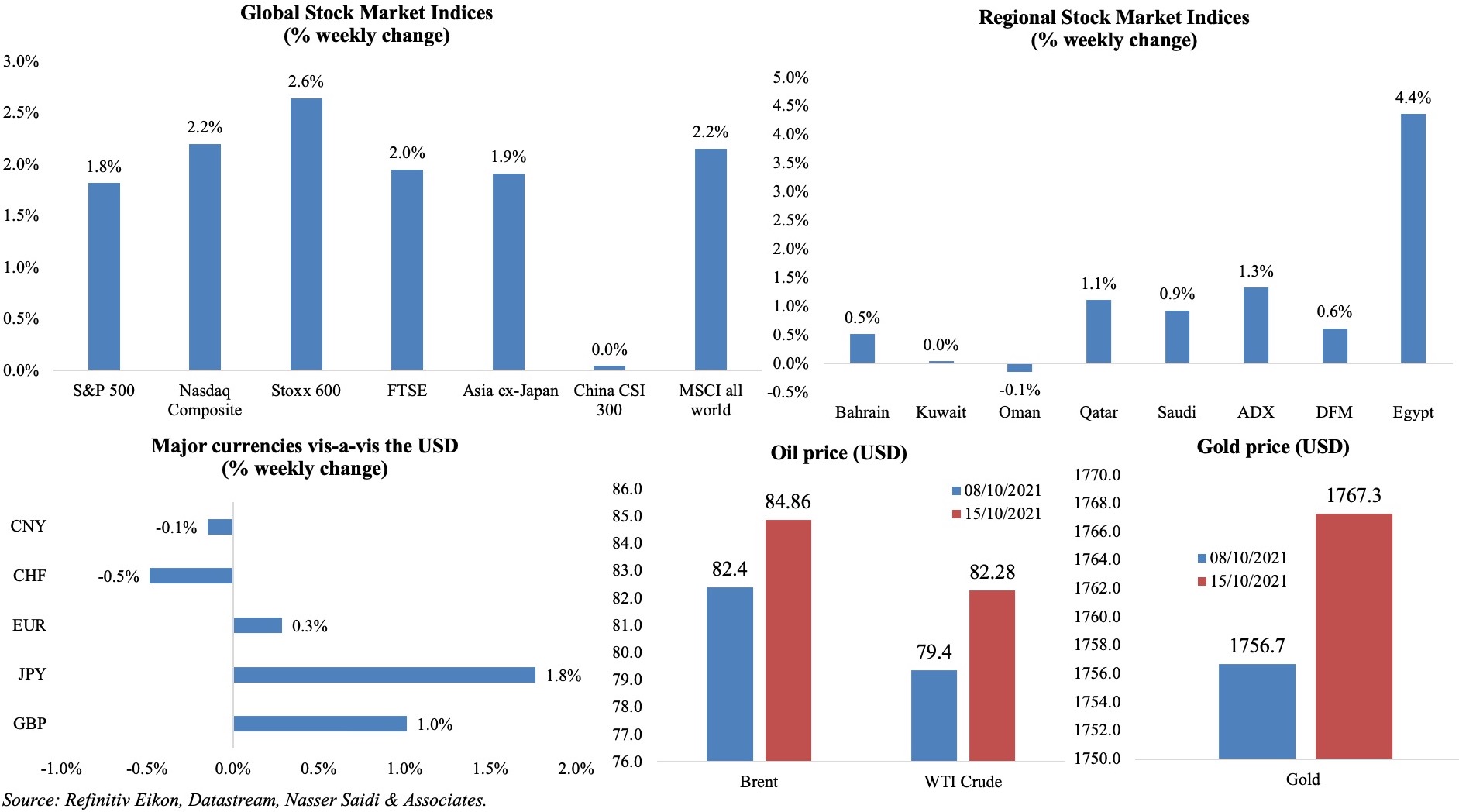 Bottomline: The IMF expects global growth to recover by 5.9% in 2021 (and by 4.9% in 2022), but at divergent paces. The main messages from the IMF remain sombre: for full global recovery, vaccine deployment must be increased; as supply chain constraints continue amid high demand, and even as employment is below pre-pandemic levels inflation is a worry (expected to decline in 2022, but highly uncertain); as economies rollback stimulus measures, economies need to be prepared for liquidity challenges as well as capital outflows. China will release its Q3 GDP numbers this week: given weak economic readings so far from retail sales to construction and given supply constraints and power cuts affecting production, it is likely to show a slowdown. This easing will likely be mirrored across the globe, given China’s crucial linkages in global value chains. Meanwhile, the UK and EU’s Northern Ireland Brexit negotiations continue (links in the Media Review section) amid already visible fallouts from Brexit especially widespread labour shortages (from truck drivers to the hospitality industry) leading to ongoing food and fuel shortages (and given backlogs, potentially shortage of even turkeys for Christmas!).
Regional Developments

Media Review
The IMF’s World Economic Outlook, Oct 2021
https://www.imf.org/en/Publications/WEO/Issues/2021/10/12/world-economic-outlook-october-2021
https://blogs.imf.org/2021/10/12/a-hobbled-recovery-along-entrenched-fault-lines/
PIF to use oil platforms to attract tourists through ‘THE RIG.’ Project
https://www.arabnews.com/node/1949041/business-economy
Brexit: What now for the Northern Ireland Protocol?
https://www.bbc.com/news/uk-northern-ireland-58925288
https://www.ft.com/content/98bd08ca-faee-4476-947d-2f3817928ee3
The Great Supply-Chain Massacre
https://www.project-syndicate.org/commentary/current-supply-shocks-and-2008-global-financial-crisis-by-diane-coyle-2021-10
How the world learns to live with covid-19: from pandemic to epidemic
https://www.economist.com/briefing/2021/10/16/how-the-world-learns-to-live-with-covid-19