Major global equity markets suffered a setback last week, with S&P and Nasdaq posting the biggest weekly drops since Feb, Stoxx down by 2% after heightened inflation worries  (latest EU reading stood at a 13-year high) while the MSCI all world index declined by 2.5%. Regional markets were mixed: higher oil and gas prices supported equity performance (especially in Qatar and Saudi Arabia) though Abu Dhabi bucked the trend, ending 1.6% lower than a week ago.  The euro posted its worst fall since mid-Jun, and the pound dragged to a 9-month low (before recovering slightly) while the yen bounced back after posting a 19-month low. Oil prices posted a substantial increase last week, with Brent breaching the USD 80 mark (for the first time in 3 years) before settling at just above USD 79 while gold price inched higher on the weaker dollar and inflation fears. 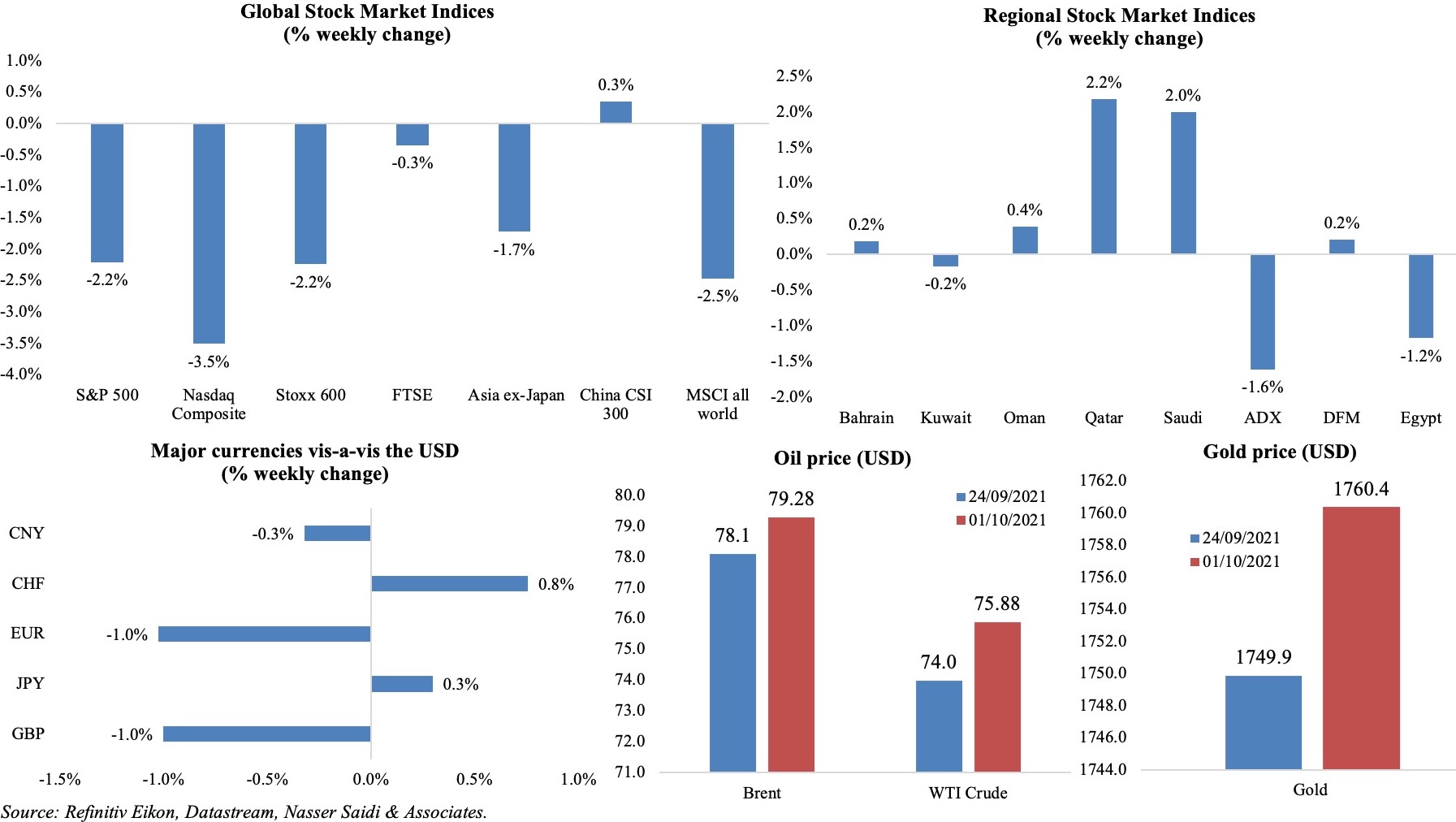 Bottomline: Global manufacturing PMI remained unchanged at 54.1 in Sep, but continue to be severely constrained by supply chain disruptions and input shortages. Europe and US readings outperform weaker Asian ones while in the US and UK, labour and skill shortages are oft mentioned as added constraints, though for different reasons with Brexit affecting the UK. Inflation woes are becoming stronger by the month amid rising energy prices (power outages in China have impacted industry and the start of winter season in the West will mean higher bills, adding to the worries), raising uncertainty about growth prospects as central banks discussions start to centre around raising rates and removing Covid-induced stimulus measures. Last but not the least, OPEC ministers are scheduled to meet on Monday to review policy: though expectations are that the existing plan will be followed, there has been increasing chatter that more oil might be added.

Lebanon’s path back from the brink of collapse
https://oecd-development-matters.org/2021/09/15/lebanons-path-back-from-the-brink-of-collapse/
Based on the OECD article, report in Al Arabiya (Arabic)
https://bit.ly/3A6wPAc

How investment in Expo 2020 will pay off for UAE economy, burnish Dubai brand
https://www.arabnews.com/node/1938241/middle-east