Inflation (both consumer and producer prices) has been picking up across the globe, though central banks are still calling it a “transitory” phase than a persistent one. 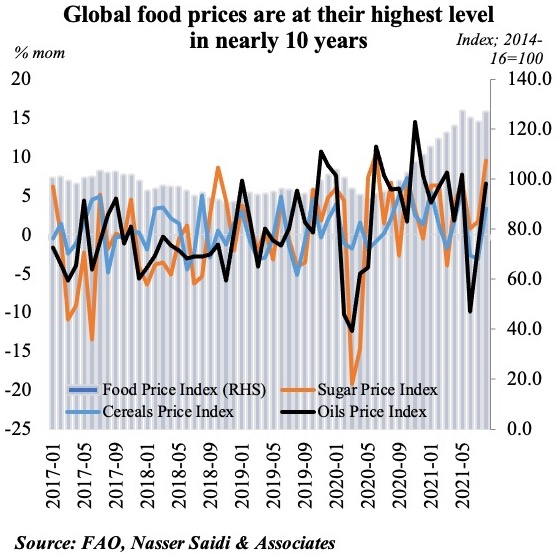 Both food and energy prices have been rising the past few months. The FAO food price index for Aug showed a 3.1% mom and 32.9% yoy increase, rebounding after 2 consecutive months of declines. Since prices had been subdued during the initial stages of the pandemic, the year-on-year surge can be associated with base effects, but the month-on-month prices have been creeping up as well. For countries highly dependent on food and other staple goods imports (especially the MENA region), the inflationary pressure will grow if this persists and also affect poorer countries disproportionately. It is worthwhile to remember that social unrest leading up to the Arab Spring a decade back came after months of rising food costs (food price inflation in Egypt had hit ~19%)!

A closer examination of prices shows that not just commodities, but also prices of durable goods and price of services (restaurants, hairdressers etc.) have been picking up, resulting in an uptick in core inflation. Why? There is a combination of factors: supply chain shocks, cyclical recovery of demand post-Covid fueled by fiscal and monetary stimulus, along with weather shocks.

The recent uptick in inflation is a global phenomenon. In the developed countries, inflation is still around the 2%-mark (higher than readings in the recent past): extended QE and low-interest rate policy environment had kept price increases minimal. However, inflation is markedly higher for many emerging markets, including emerging Europe. In India, the latest reading stood at 6% (at the top end of the central bank’s target range) while in Brazil and Russia, it was 8.9% and 6.7% respectively (way higher than targets of 4.5% and 4% respectively). 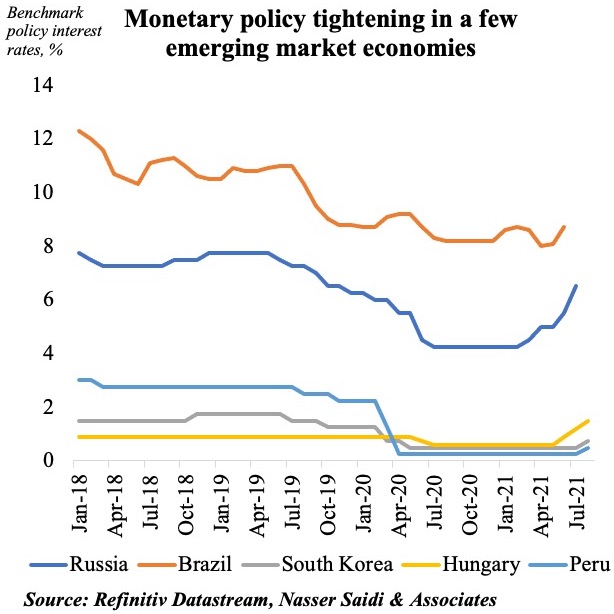 South Korea, where inflation in Aug stood at 2.6% (the highest since Aug 2017, and higher than the 2% central bank target rate), became the first developed Asian nation to raise interest rates since the beginning of the pandemic. The rate was increased from a record low of 0.5% to 0.75% and the move is expected to curtail the surge in household debt and home prices. Russia, Brazil, Mexico, Peru and Hungary are a few central banks that have hiked rates in the past few months, with Russia’s central bank warning of a potential new global financial crisis if global inflation is not contained. Going forward, we expect many central banks to follow suit, abandoning their dovish policy stance and start tightening to contain inflation (including asset price inflation, including housing prices which have surged). It needs to be a delicate balance though, as higher interest rates would hurt economic recovery and growth, especially as many are facing new Covid19 outbreaks amid a low vaccination pace.

Many of these emerging market governments have borrowed extensively during the pandemic to spend on fiscal relief measures. Global government debt is now at the highest level since World War II. 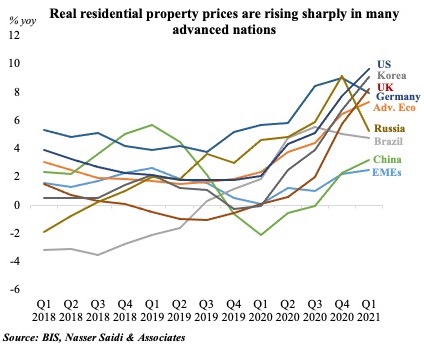 Public and external debt have risen significantly for the median emerging market economy, reaching 59 and 44% of GDP, respectively, in 2020, and gross financing needs are projected to stay above 10% of GDP in 2020–21, according to IMF projections. We expect debt to GDP levels to remain much higher than pre-Covid levels for many years ahead, increasing their vulnerability to tapering by the Fed and the ECB resulting in higher borrowing costs. For now, debt service costs are quite low (given low US interest rates) in foreign currency, but external borrowing costs are unlikely to stay low for longer. The Fed has already signaled that it might raise interest rates sooner than earlier expected. So, markets, including emerging markets, can no longer count on a steady injection of liquidity – be on the lookout for vulnerable corporates and countries with high debt exposure. Plus, as the US tightens monetary policy, emerging market currencies will come under pressure (more expensive to import goods, thereby increasing domestic prices further as well as aggravating current account deficits). 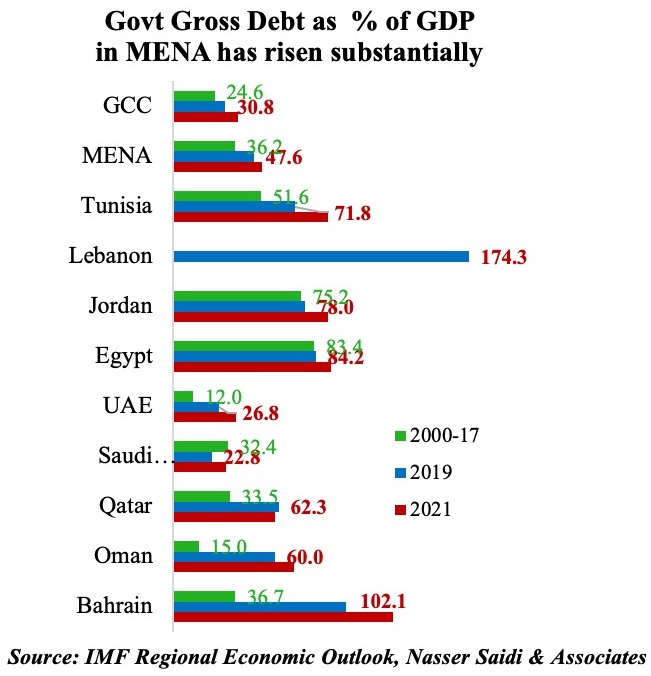 In the MENA region, almost half the nations have gross government debt above 70% of GDP and one in 4 had public gross financing needs above 15% of GDP by end-2019. The pandemic led to a significant loss in revenues (both oil and non-oil) and though international financial markets were tapped, domestic financing increased. According to the IMF, governments in Egypt, Jordan, and Tunisia covered more than 50% of their public gross financing needs with domestic bank financing in 2020. Such bank exposure to the public sector could also crowd out the private sector at a time when a private activity push is required for higher economic growth and job creation. A surge in inflation can lead to a reduction in the real value of domestic debt – Lebanon is a good example, but the sharp currency depreciation makes the debt burden unsustainable.

Inflation remains under control in the GCC for now and even though food prices are rising, the overall cost of living has been kept in check given relatively low housing/ utilities costs. For now, many businesses are absorbing the higher costs (as mentioned in the region’s PMI surveys) and narrowing profit margins to revive domestic demand. Since GCC nations’ inflation reading can be driven up by trading partners’ inflation, it is prudent to keep an eye out. Food imports as a share of overall imports was least in the UAE (6.7% in 2019) and most in Oman (16.3%). For the GCC currencies that are pegged to the dollar, higher food prices can quickly pass through to consumer prices, while central banks have little or no monetary policy independence to address inflation shocks. 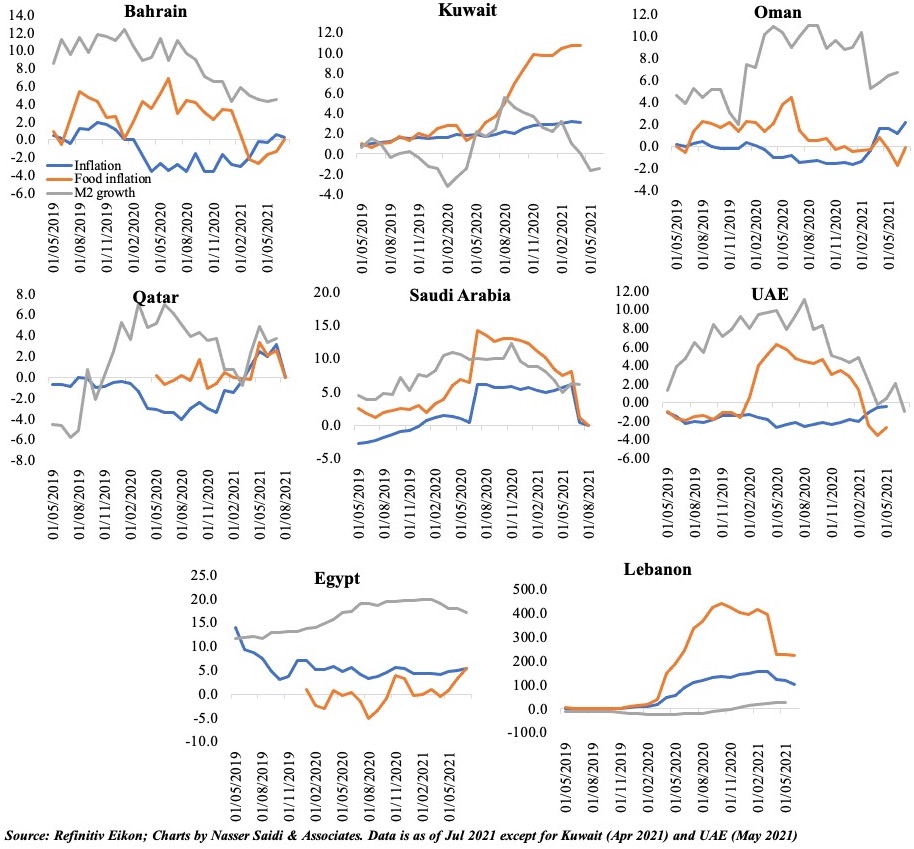