US stocks continued to rise to new records, with the latest better-than-expected jobs data: according to S&P Dow Jones indices, this winning streak was the longest run of consecutive record closes since June 1997. In Europe, both Stoxx600 and FTSE closed slightly lower than the week before. In Asia, China’s shares dropped a day after the Communist Party’s centenary celebrations, after some harsh rhetoric against nations criticizing China’s policies (trade, tech, human rights) and on expectations of tighter monetary policy. Regional markets were mixed last week: Abu Dhabi stocks touched a new record high while Saudi Tadawul posted its 8th weekly gain. In currency markets, dollar slipped from a 3-month high on Fri; the yen strengthened by 0.2% while the euro was down by 0.6%. With OPEC+ talks stalled over UAE’s opposition to the deal (UAE wants to raise its own output target), oil prices remained above USD 75 a barrel. Gold price closed nearer to USD 1,800. 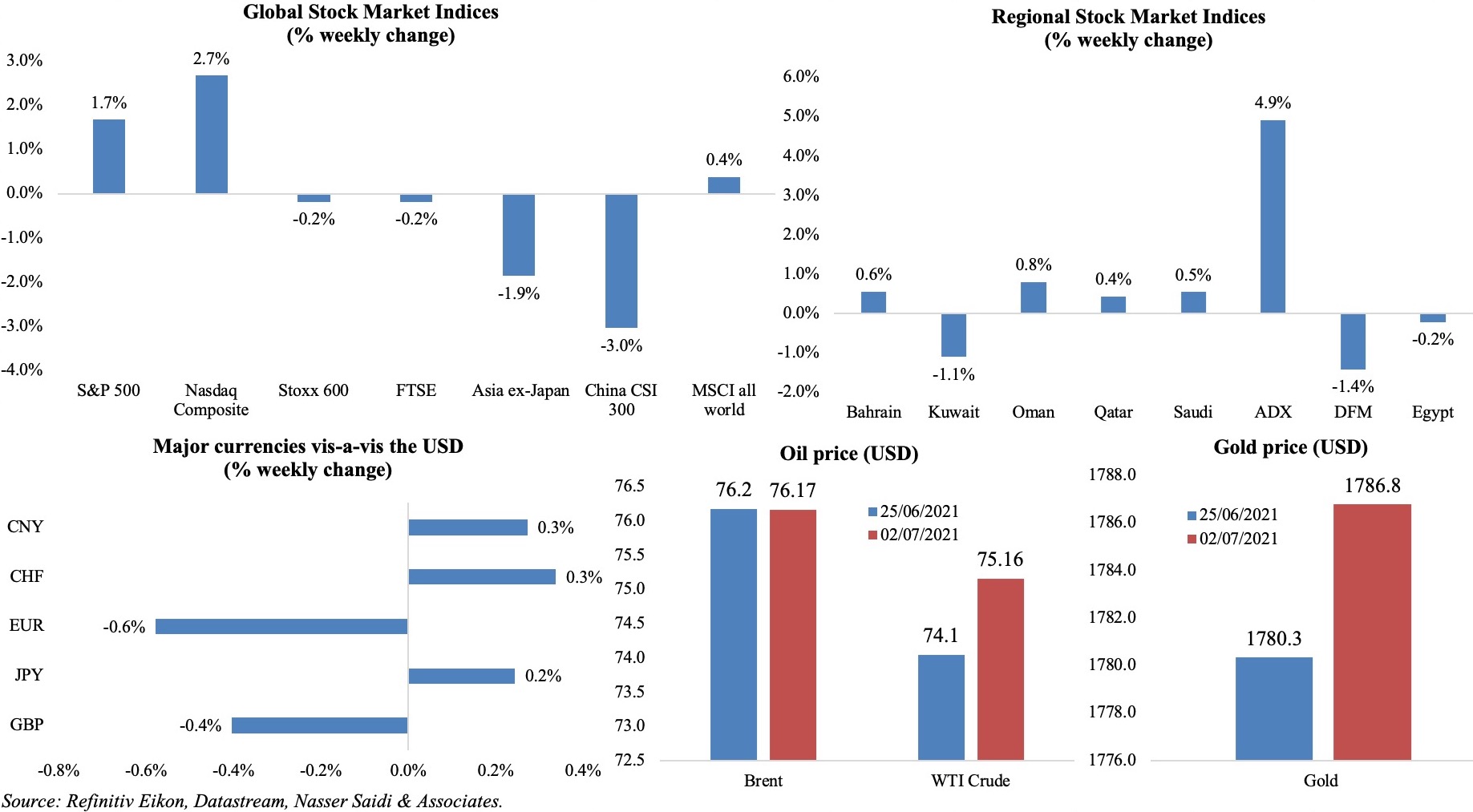 Bottomline: Manufacturing PMI data releases across major markets confirmed an upturn in manufacturing: J.P. Morgan global manufacturing PMI eased to 55.5 in Jun from May’s 11-year high of 56. While employment, output and orders rose, Asian nations were underperformers (China, Japan, India) compared to Europe and the US. However, supply disruptions and higher input costs were also widely reported. A deadlock in OPEC+ talks was unexpected, with the UAE holding out for higher own output targets. The cartel was also planning to extend the supply deal to beyond Apr 2022 (when it was set to expire). Covid19’s more infectious variants leading to spikes in cases across the globe is worrisome: 96 nations have reported Delta variant cases, with UK cases alone rising by 67% in a week. On the other hand, holiday travel is in full swing: ahead of the Jul 4th weekend in the US, TSA reported that airport screenings climbed above 2019 levels on Thursday (2.15mn persons vs 2.01mn on July 1, 2019); the EU COVID-19 travel certificate was launched to facilitate summer travel though recovery is expected at different paces (e.g. Spain is more optimistic than Greece; more in Media Review section) given new travel restrictions from the UK and Germany.

Markets Global equity markets climbed up. The S&P 500 and Nasdaq in the US posted