Markets
Equity markets were mostly down on widespread sell-offs and concerns about the recent spike in Covid19 cases, in spite of strong earnings season (86% of U.S. firms have beaten earnings expectations). China’s equity markets ended on a strong week, aided by clean energy and healthcare sector shares; the CSI300 was up by 3.4% – the biggest gain in 2 months. Regional markets were mixed: most were supported by a good corporate earnings season, while Egypt posted the highest increase of 4.5% last week, in spite of a blue-chip sell-ff on Thursday. The euro appreciated as the dollar lost some ground. Bitcoin and other cryptocurrencies slid on Biden’s plans to raise capital gains taxes. Oil prices declined on the Covid19 impact on two major oil importers – surge in India and Japan’s state of emergency; as a safe-haven asset, gold price edged up by 0.05%, still hovering near a 2-month high.
Weekly % changes for last week (22-23 Apr) from 15 Apr (regional) and 16 Apr (international) 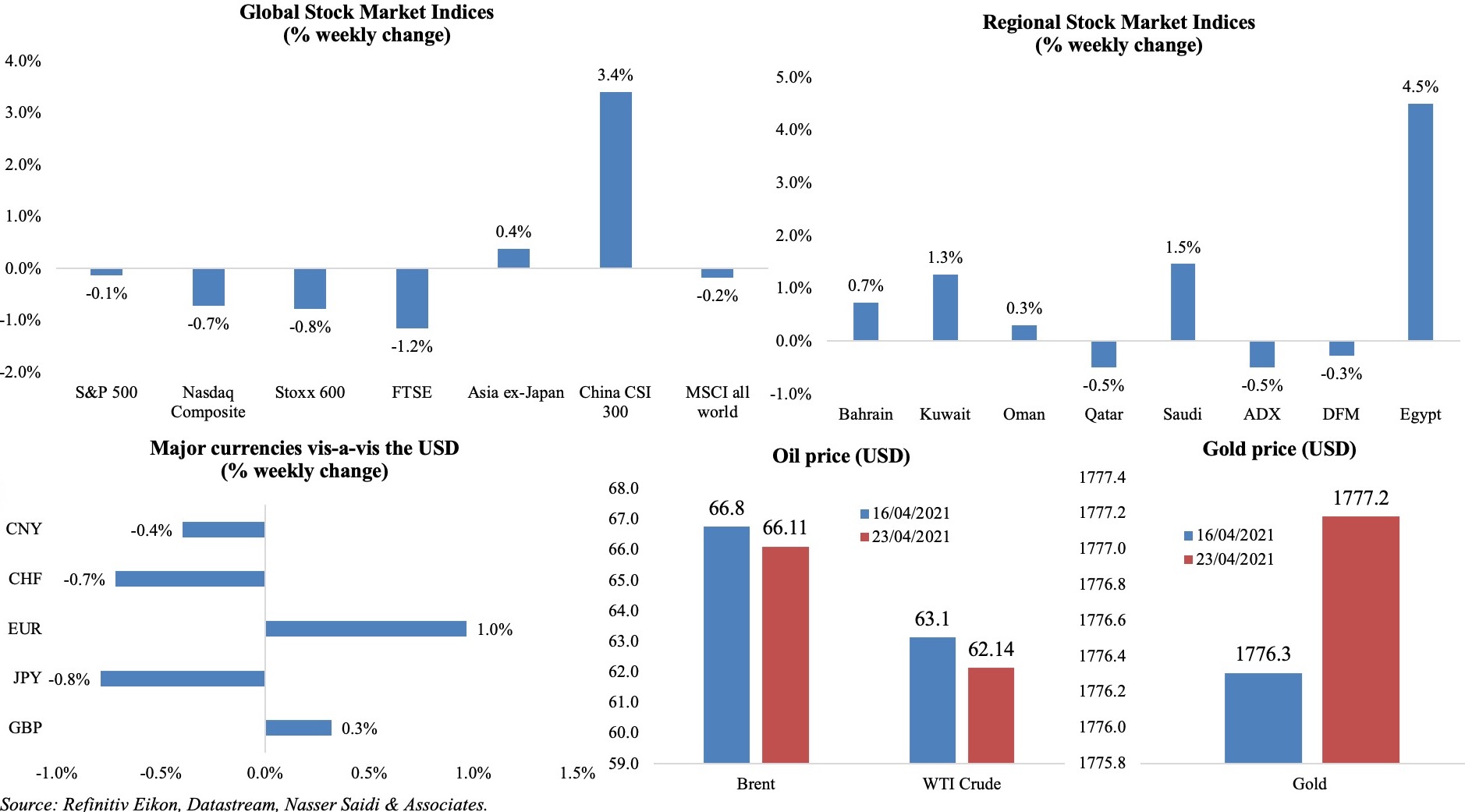 Bottomline: The release of preliminary PMI numbers underscored that rising production costs (on higher shipping costs) and delivery delays are evident across the globe (which could spill over into inflation numbers in the near-term). While data from the US points to a faster economic recovery, how Europe recovers will depend on its pace of vaccine rollout – already, there are fears of opening up “too early” (France to ease travel restrictions from May 3, Italy to reopen restaurants & cinemas, Greece lifting quarantine requirement for vaccinated persons or those with a negative PCR from key tourism markets). In Asia, Japan declared new lockdowns in Tokyo, Osaka and two other prefectures; with India struggling to contain its second wave, its new strains could potentially derail global recovery. Adding to the worries are concerns about vaccine production: India’s Serum Institute has not fulfilled its commitment to supply the AstraZeneca vaccine globally (to UK, EU and Covax), but is also planning to sell the vaccine to state governments and private hospitals in the country (at higher rates).
Divergence in growth seems to be the medium-term story: how recovery pans out will depend on the simultaneous impact of countries vaccination pace and achieving herd immunity while keeping 3rd/ 4th/ 5th waves at bay. Separately, among central banks, Bank of Canada signaled an exit from stimulus – tapering its bond-buying program – while Russia raised its interest rate by 50bps to 5% given the weak Rouble amid high inflation levels, while also signaling more were to come. Lastly, the OPEC+ meeting on April 28 to review oil production/ supply is unlikely to see any changes.
Regional Developments