The IMF issued its latest Regional Economic Outlook for the Middle East region this week. Real GDP for the Middle East and North Africa (MENA) region is forecast to grow by 4% this year (up 0.9 percentage points from the projection in Oct 2020) after having slumped by 3.4% in 2020 (vs an estimate of a 5% drop in the Oct 2020 edition). Growth outcomes and prospects will still be centred on how the pandemic progresses in the region amid the pace of vaccination rollouts. 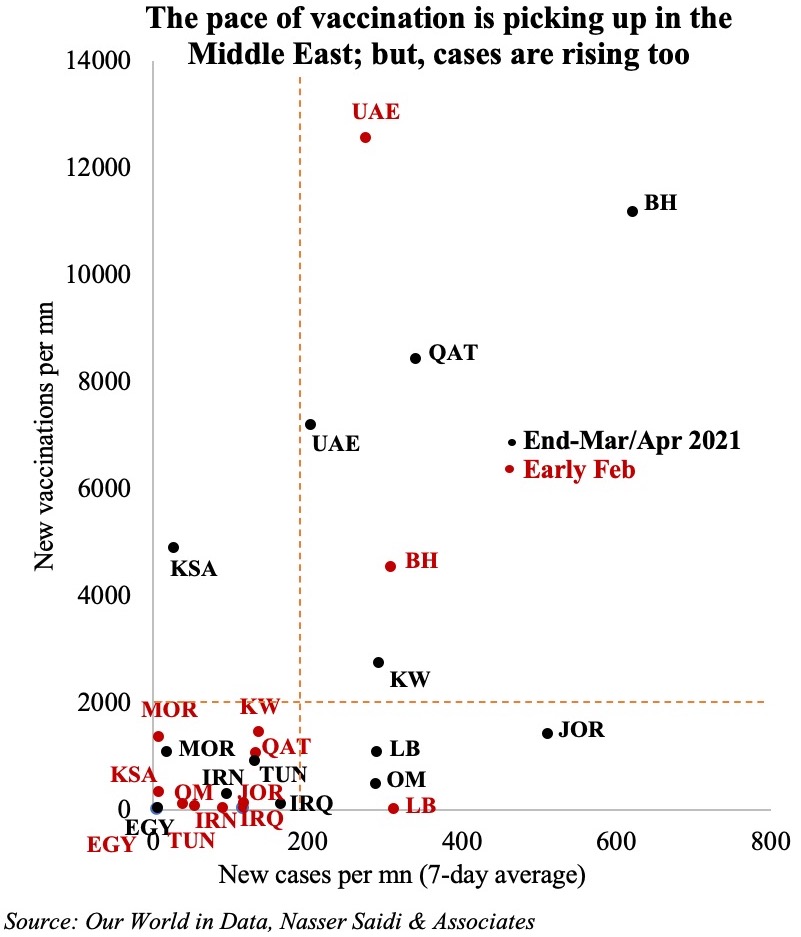 The MENA region is now home to more than 7mn confirmed cases, with Iran the single largest contributor (share of close to 30%) and the GCC accounting for nearly 25%. Infections have been ticking up in the region since the start of this year. This has resulted in increased targeted restrictions and lockdowns in many a nation.
The chart compares the pace of vaccination and new cases. Vaccination pace is picking up in the region: the UAE leads the pack, having disbursed a total of 9.16mn doses as of Apr 13th. With the supply of vaccines increasing (thanks to COVAX facility and donations from the UAE, Russia, China etc.), new vaccinations (black dots in the chart) have improved in most nations (compared to early Feb, marked in red). The production of vaccines domestically in the region will also boost supply later this year: UAE plans to manufacture Hayat-Vax, Egypt has an agreement with Sinovac Biotech, and Algeria will produce Sputnik-V from Sep onwards).
Meanwhile, reported cases are also higher compared to early Feb – many countries are now outside the small quadrant on the bottom-left of the chart. Depending on how fast vaccinations can lead to herd immunity will determine recovery paths – especially so in the more tourism-dependent nations (e.g. Egypt, Jordan, Lebanon). 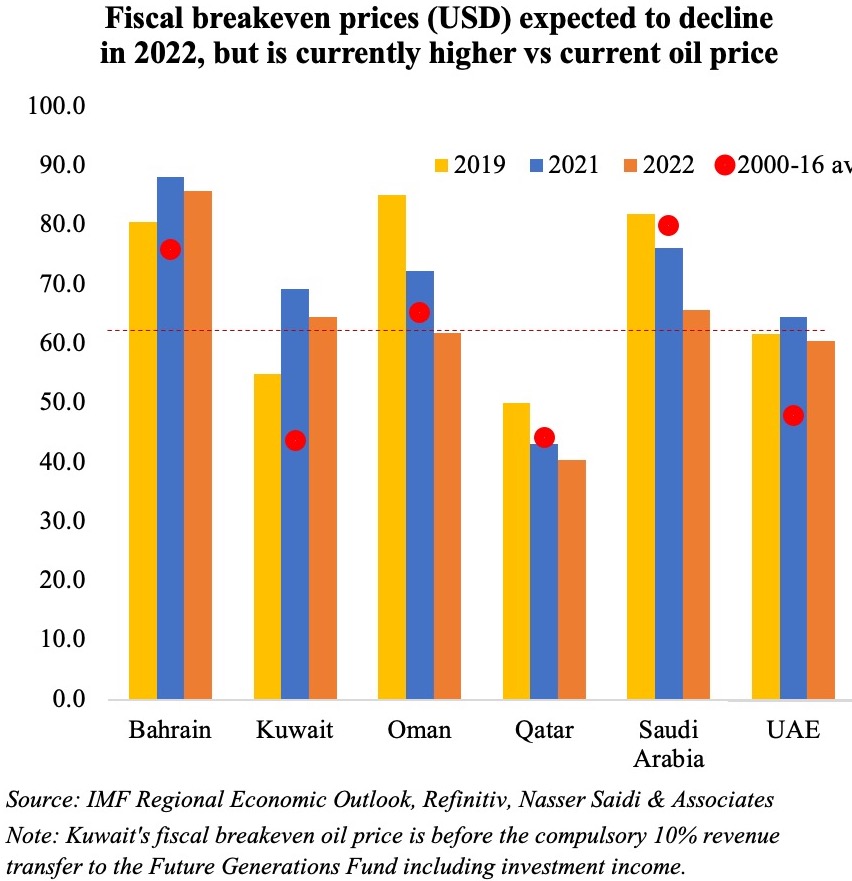 However, policy measures introduced to support the economy during the pandemic is creating immense fiscal strain. Fiscal deficits widened to 10.1% of GDP in 2020 in the MENA region from 3.8% in 2019. It was severe in the GCC as well: fiscal deficit widened to 7.6% of GDP last year (2019: -1.6%), as the impact was from both lower oil and non-oil revenues. The fiscal breakeven price this year ranges from a high USD 88.2 in Bahrain to a low USD 43.1 in Qatar. While, it is expected to decline across the board next year, it still remains higher than the current oil price levels for most nations. Given new rounds of restrictions and with oil demand not yet at pre-pandemic levels, the OPEC+’s recent decision to roll back production cuts are likely to depress oil prices. As real oil prices trend downward, fiscal sustainability becomes increasingly vulnerable.
With business operations and revenues affected due to the pandemic alongside weakened domestic demand, non-oil revenues as a share of non-oil GDP declined in 2020: Saudi was the sole exception, given its VAT hike to 15% from Jul 2020. Oman is expected to witness a significant boost in non-oil revenues this year, with the introduction of VAT from Apr 16th. Oil exporters in the region are still highly dependent on oil revenues, as is evident from the large non-oil fiscal deficits in the GCC. In 2021, it is forecast at a high 72% in Kuwait and an average 30.9% and 29.9% in the GCC and MENA oil exporters respectively. 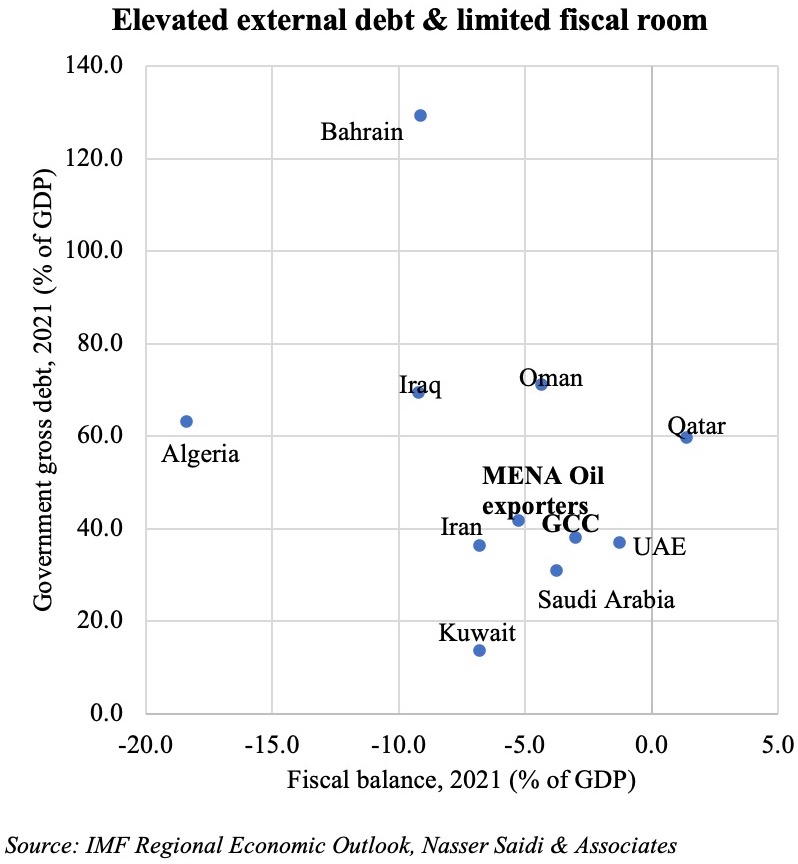 Higher deficits and negative economic growth resulted in governments resorting to multiple financing options: borrowing from commercial banks, tapping international and regional markets (bond issuances, commercial loans) as well as drawing down from international reserves at the central banks/ sovereign wealth funds. Government debt levels increased to 56.4% and 41% in the MENA and GCC regions last year. Though it is forecast to fall slightly this year, it still remains higher than the 2000-17 average of 36.2% and 24.6% respectively. The IMF estimates financing needs in the MENA to touch USD 919bn for this year and next. Public-financing requirements were likely to stay above 15% of GDP in most parts of the region through end-2022.
This could pose a significant risk in the coming years: (a) sectors affected by the pandemic are being supported by government policy stimulus. When this support is rolled back eventually, this could result in bankruptcies, defaults and job losses, further causing an increase in banks’ non-performing loans; (b) global financial conditions have been quite accommodative and so long as cost of capital remains low, there will be an appetite for borrowing and even refinancing maturing debt. However, a faster-than-expected global recovery could lead to interest rates hikes, push long-term rates and funding costs higher, increase sovereign spreads, thereby tightening financing conditions – affecting countries with large external financing needs (and their indebted corporates). Though GCC’s sovereign debt levels are relatively low, over USD 100bn is expected to mature in 2021-25.