Download a PDF copy of this week’s economic commentary here.
Markets
Global equity markets declined across the board last week, as investors reduced their exposure to risk amid US government bond yields spiking to near 1-year highs in a large US Treasury sell off. In the region, markets were mixed: Saudi gained after it successfully raised EUR 1.5bn in a Eurobond deal with a negative yield. The dollar was stronger vis-à-vis most major currencies including the Japanese yen and risky currencies like the Aussie dollar weakened; euro touched a 7-week high but closed lower. Gold fell by 2.7% to an 8-month low, while Brent oil touched a 13-month high last week (but closed lower) after a drop in crude output was reported following the Texas freeze and ahead of the OPEC+ meeting this week.
Weekly % changes for last week (25-26 Feb) from 18 Feb (regional) and 19 Feb (international). 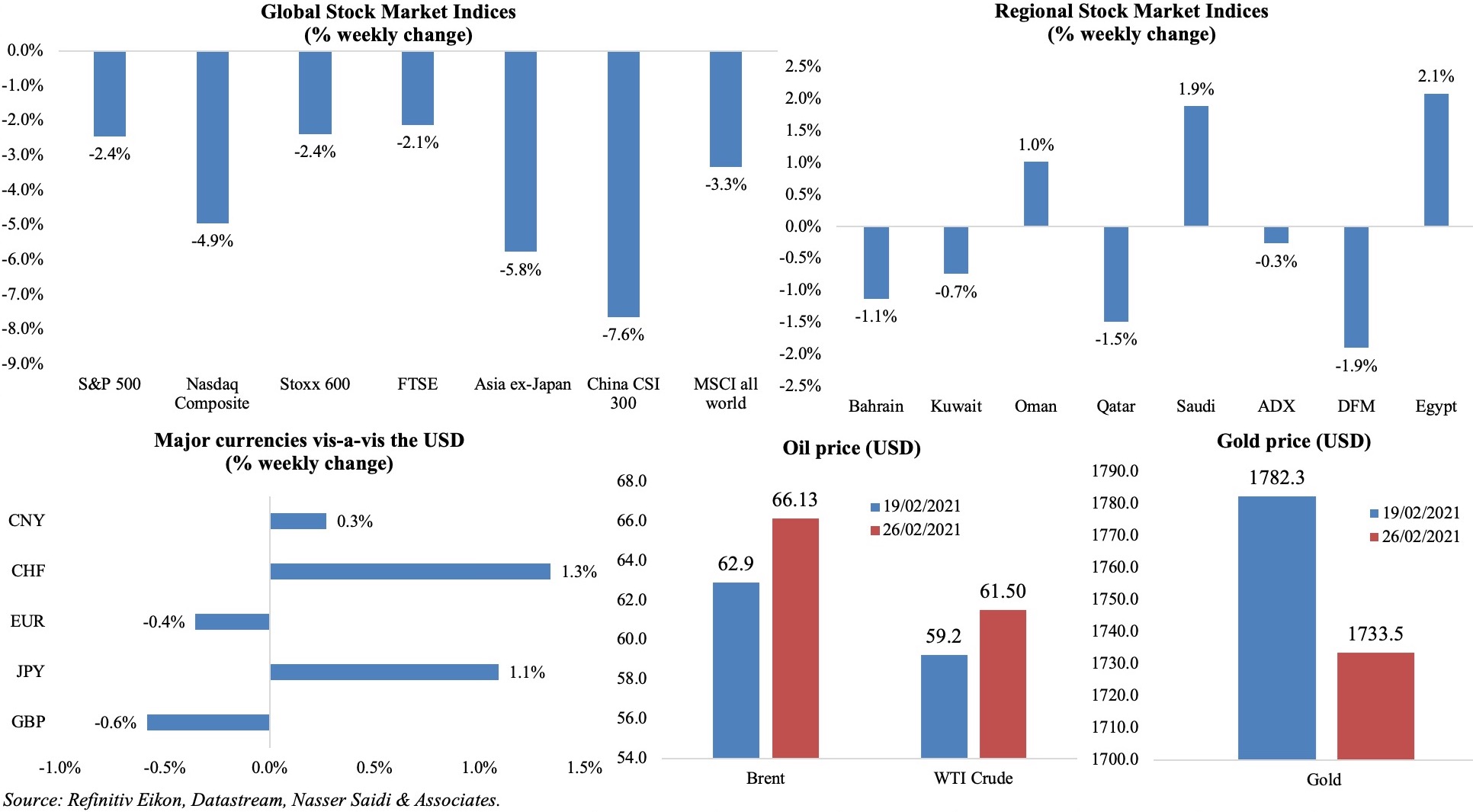 Bottom line: With major global banks like Goldman Sachs and Morgan Stanley raising their oil price forecasts to USD 70 and many oil producers itching to raise production to corner higher revenues, the Mar 4th OPEC+ meeting will be interesting to watch: the slow pace of current vaccination drives implies that it will take much longer for the global economy to fully open up and attempt to reach pre-pandemic activity levels (implying subdued demand for oil). In the meanwhile, rising inflationary pressures are raising “taper tantrum” worries as central bankers try to soothe investor concerns over rising bond yields, recovery prospects and asset price bubbles.
Regional Developments

Media Review
Yuval Noah Harari: Lessons from a year of Covid (Free to read)
https://on.ft.com/2NK3pWx
No One Is Safe Until Everyone Is Safe
https://www.project-syndicate.org/commentary/g7-covid19-promises-must-go-beyond-financial-aid-by-mohamed-a-el-erian-2021-02
Interview with Saudi Arabia’s Investment Minister on Regional HQs
https://youtu.be/apypUCW19FE
https://www.arabnews.com/node/1813691/business-economy
Analysis: How rich is Saudi Arabia? Kingdom does the math in balance sheet overhaul
https://www.reuters.com/article/uk-saudi-economy-reforms-analysis/analysis-how-rich-is-saudi-arabia-kingdom-does-the-math-in-balance-sheet-overhaul-idUKKBN2AN0GX
Women, Business & the Law 2021
https://openknowledge.worldbank.org/bitstream/handle/10986/35094/9781464816529.pdf
https://blogs.worldbank.org/developmenttalk/women-business-and-law-2021-womens-economic-empowerment-critical-resilient-recovery
What is the cheapest way to cut carbon?
https://www.economist.com/finance-and-economics/2021/02/22/what-is-the-cheapest-way-to-cut-carbon