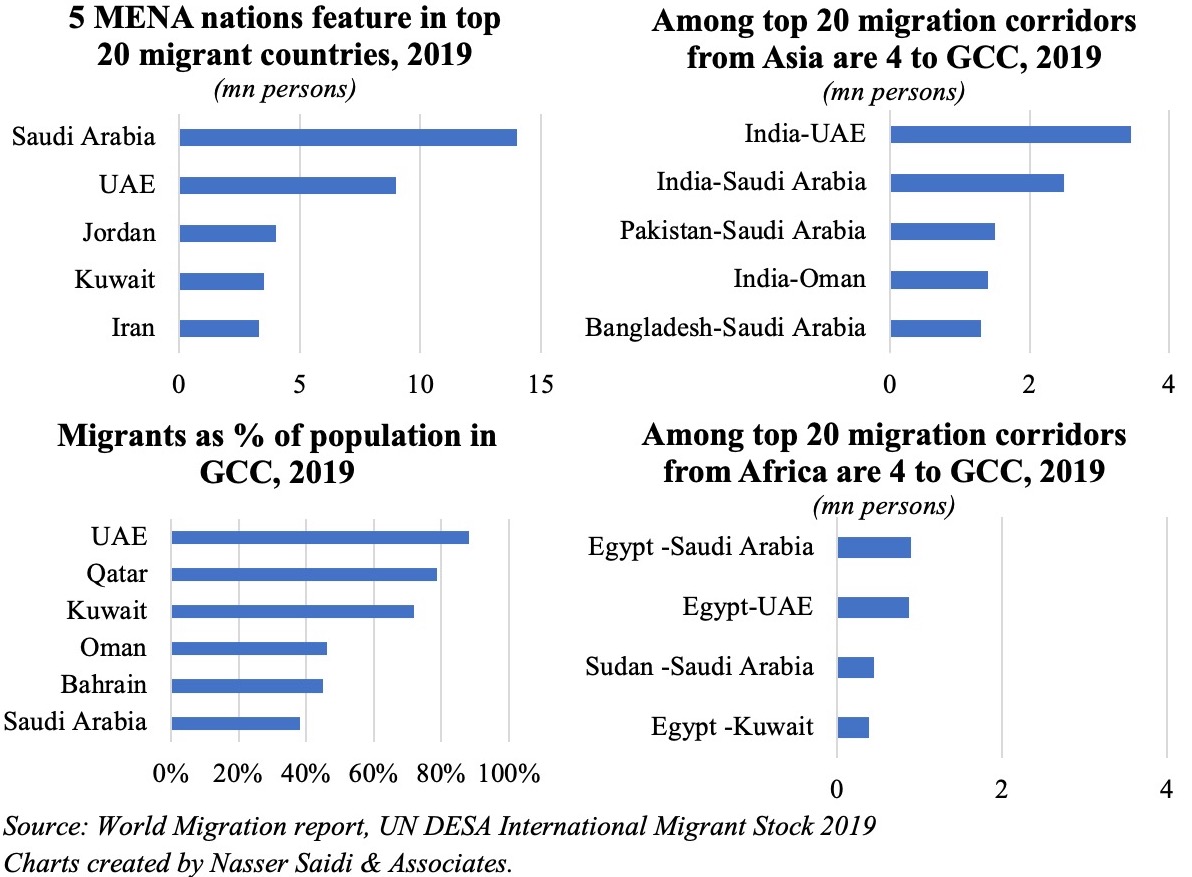 It is no secret that the GCC is home to one of the largest migrant communities globally. Five MENA nations feature in the top 20 migrant attracting nations globally (by number of persons). Expat share in population across the GCC varies from Saudi Arabia’s less than 40% to UAE’s high 88%. According to the UN, top 20 migration corridors from Asia and Africa include those to the GCC nations: in 2019, India-UAE was the second-largest migration corridor in Asia (but, second only to refugee movement from Syria to Turkey), while migration from Egypt to Saudi and UAE occupied the top 5th & 6th spots among African nations.
Burdened by Covid19 and lower oil prices last year, job losses in the GCC and return migration has raised key concerns about the sustainability of dependence on expatriate labour. With published monthly data of labour/ employment lacking in most GCC nations, reliance on anecdotal evidence is high. Official NCSI data showed that more than 270k expats left Oman between end-2019 to Nov 2020 (roughly 16%). This Covid19-related “expat exodus” coupled with recent moves to nationalize various professions and replace expats with nationals in senior positions at state-run firms, highlight a growing predicament facing many GCC nations – how does a government justify the need to hire expatriate labour amid rising youth unemployment levels? 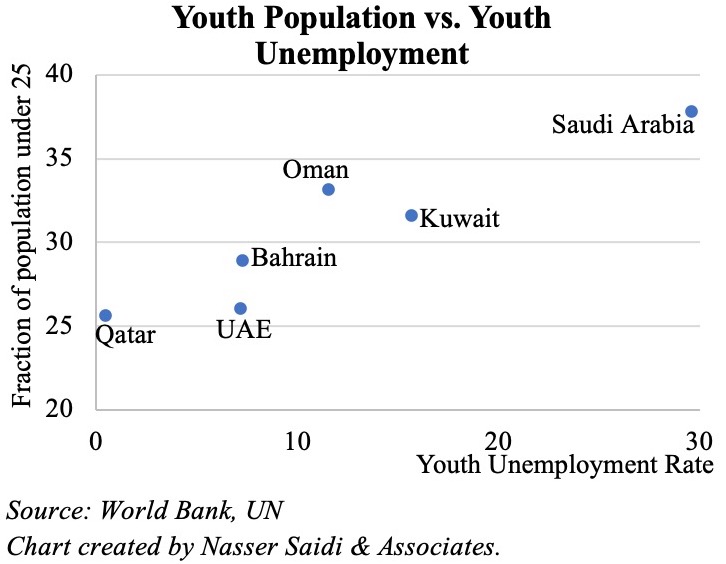 This pressure is building up in nations with high shares of population under the age of 25. Depending on labour force participation rates, the IMF estimates that the GCC labour force could grow by an additional 2.5mn nationals by 2025. While similar numbers are more intense in the labour-exporting nations within the MENA region, needless to say that there are some common challenges: job creation (in the private sector), gender disparity, preference to wait for a public sector job, address low levels of efficiency and productivity, to name a few.

Remittances in the GCC: should they be taxed?

According to the World Bank, outward remittances from the GCC touched USD 112bn in in 2019: while this was a drop of 6% yoy, as a share of GDP it still stood at 11.9% in Oman, 11% in Kuwait and 10.7% in the UAE. Together, UAE and Saudi Arabia account for more than 2/3-rds of total remittances from the GCC. Did the pattern of remittances change during the Covid19 pandemic? The combined effect of the pandemic and related job losses alongside lower oil prices were expected to have an adverse effect on remittances. The World Bank expects global remittances to drop by 7% yoy to USD 666bn in 2020 (and by a further 7.1% in 2021) and inward remittances into the MENA region to decline by 8.5% to USD 55bn in 2020 (and by 7.7% to USD 50bn in 2021) negatively affecting labour exporting countries like Egypt.

At the GCC level, quarterly (headline) data are available in Saudi Arabia, UAE and Kuwait. Saudi Arabia has witnessed a continued drop in remittance flows consistent with the oil price declines (it saw 12 straight quarters of yoy declines since 2017), alongside the introduction of nationalization policies in many sectors. While the drop in Q2 was consistent across all three nations, both Saudi and UAE reported an increase in remittances in Q3 (Kuwait is yet to release Q3 data). This could be a result of multiple factors: job losses resulting in transfer of savings to the home country, an increase in digital remittances (versus unrecorded cash during trips home), transfer of excess savings (given lack of travel, leisure activities), exchange rate movements and/ or remittances to support families in the home country. The World Bank identified a potential (yet to be evaluated) “Hajj effect” when analyzing remittances into Pakistan and Bangladesh – savings that had been set aside for Hajj were sent home instead given travel restrictions and the reduction in the issuance of Hajj visas.
Should remittances be taxed?
While there have been sporadic calls for a tax on remittances, this has yet to take a credible form and is oft refuted by government/ central bank officials. Oman is currently studying a proposal for a personal income tax on high-earners – if introduced, it will be a first in the region and could see similar rollouts across the region (depending on its impact). Though this will raise a question of “taxation without representation”, there are other approaches to encourage expats to retain their saving and invest in the economies (versus investing in their home country). This essentially boils down to a combination of labour and financial market reforms. Here is a non-exhaustive list.

In the backdrop of the Covid19 pandemic, the UAE introduced many expat-friendly schemes to attract and retain a high-skilled workforce, essential to support its vision for the 4th Industrial Revolution future. Even if we consider the “expat exodus” from the country last year, there are silver linings: in early Nov, the Indian Ambassador revealed  that more than 200k Indians were returning to the country (this compares to the 600k persons that travelled after May); PMI’s employment sub-category is finally in the expansion territory after months of sub-50 readings. Rather than focusing on inward facing nationalization policies, other GCC nations could take a leaf out of the UAE’s example to encourage job creation (including for their citizens). This would be an enlarge the cake, win-win policy as opposed to taxation of remittances.