UAE needs to attract FDI into viable, sustainable economic diversification sectors & projects
The liberalization of foreign ownership laws in the UAE (announced this week) breaks down major barriers to the rights of establishment and will be a game-changer for the country. This reform will help to reduce costs of doing business, lead to a recapitalization of existing jointly owned companies and encourage entrepreneurs to invest in new businesses and new ventures, supporting innovation and the introduction of new technologies while also promoting inflows of foreign direct investment. Foreign companies within UAE’s free zones would also be allowed to link up with the domestic economy, supporting local businesses and thereby boosting overall growth. The barriers between free zones and the domestic economy would become blurred, if not absent leading to greater competition and improved competitiveness.
The latest announcement follows a spate of reforms undertaken this year – including labour (long-term residency via a 10-year visa, Dubai’s virtual/remote working visa and retirement visa, Abu Dhabi’s freelancer permit/ license) and social (removing laws which criminalized alcohol consumption, cohabitation) – aimed to revive the economy attempts from the negative impact of low oil prices, Covid19 and the Global Lockdown. Importantly, these reforms will encourage the retention of savings in the UAE, reduce remittances and capital outflows, thereby structurally improving the balance of payments. Overall, the result will be an improvement in the Doing Business ranking of the UAE. 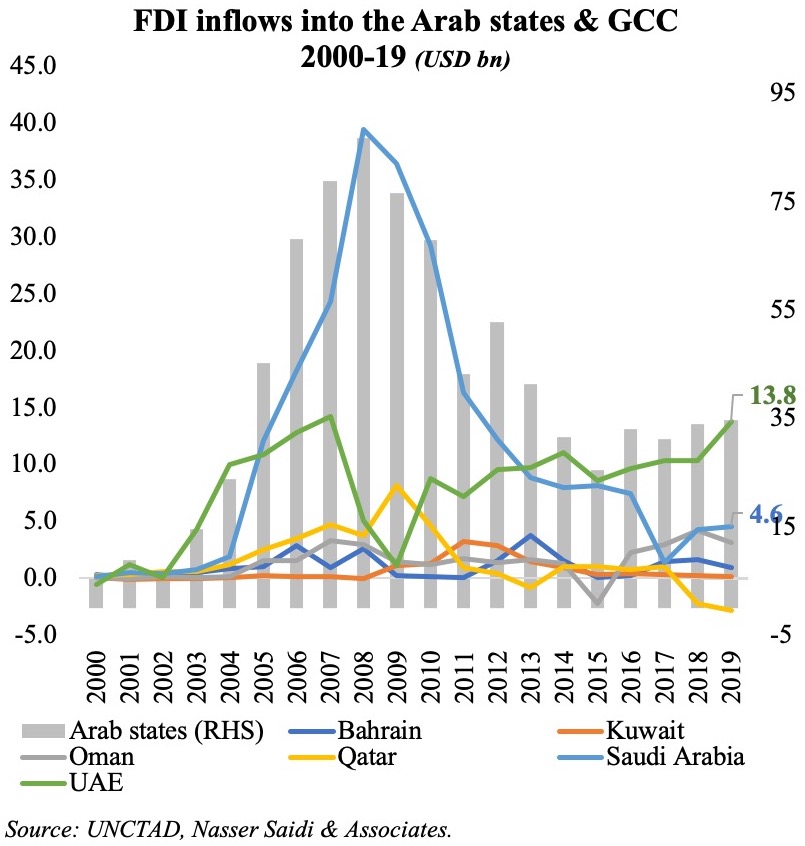 We focus on FDI in this Weekly Insight piece. FDI inflows are essential to the UAE’s diversification efforts, as it would not only create jobs, raise productivity and growth, but could also lead to transfer of technology/ technical know-how and promote competition in the market. According to the IMF, closing FDI gaps in the GCC could raise real non-oil GDP per capita growth by as much as 1 percentage point.
While FDI inflows into the Arab region have been slowing in the past decade, the UAE still remains one of the top FDI destinations in the region. Inflows dipped during the time of the financial crisis (to USD 1.1bn un 2009 from an all-time peak of USD 14.2bn in 2007), but rebounded to USD 13.8bn last year, before the Covid crisis. Reforms to improve the investment climate (including allowing 100% ownership at free zones and protecting minority investors), its ease in doing business, good infrastructure as well as macroeconomic and political stability are factors that have aided the increase in FDI.
In 2019, UAE was the second largest destination for FDI inflow into the Arab region (USD 13.6bn or 3.4% of GDP, accounting for 21% of total), behind Egypt (USD 13.7bn or 2.8% of GDP, 23% of total) while it dominated FDI by number of projects (445). Interestingly, UAE is also a major capital exporter, having invested a total USD 8.7bn into the Arab nations last year (topping the list and accounting for 14.4% of total FDI inflows into the region). In part, this reflects the UAE’s hosting of multi-national enterprises investing across the region. 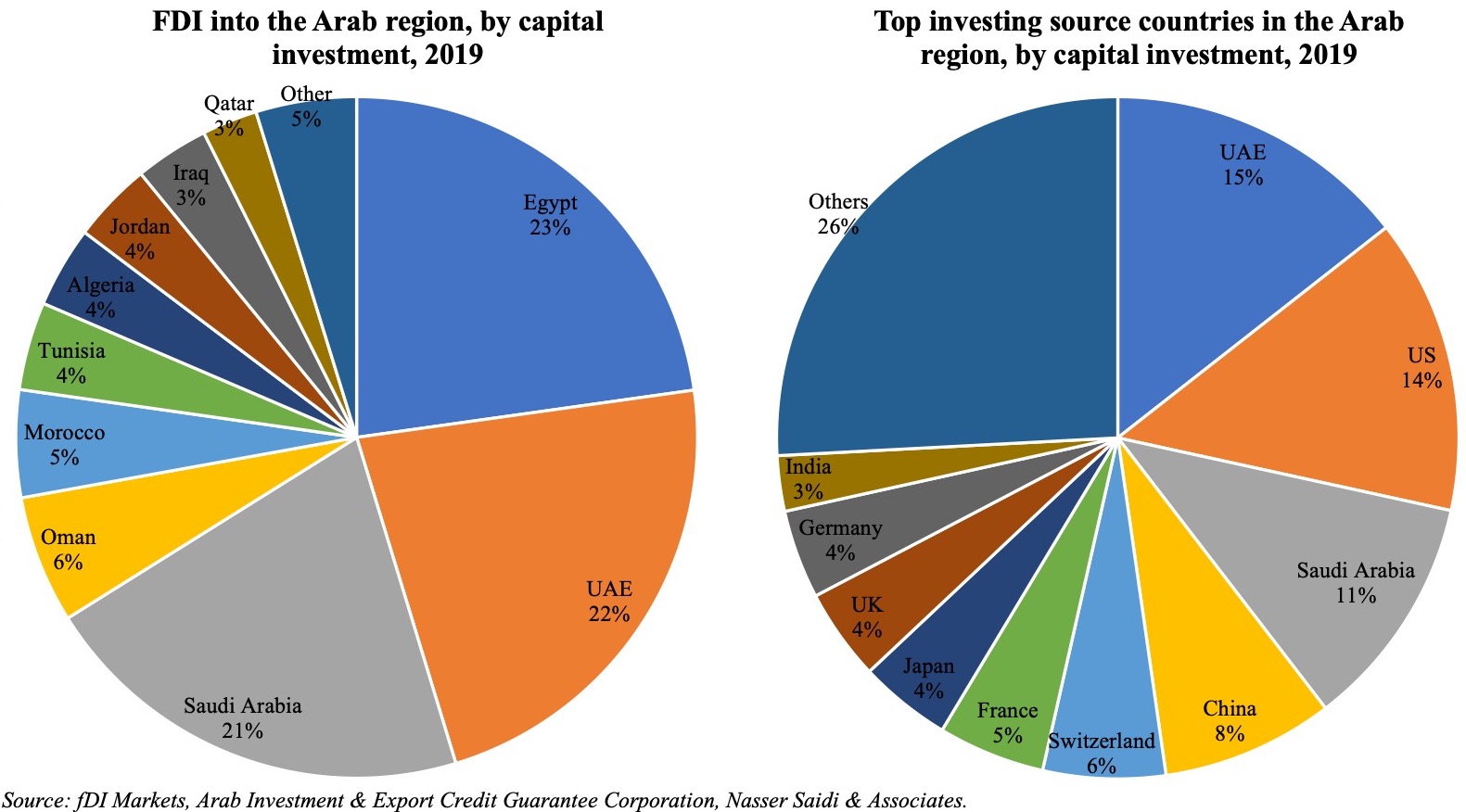 In spite of the Covid19 outbreak negatively affecting FDI inflows[1], Saudi Arabia defied the trend by posting a 12% yoy increase in inflows to USD 2.6bn in H1 2020[2] – in part linked to its mega-projects related to achieving Vision 2030. In Q1 this year, the UAE, along with Saudi Arabia and Egypt accounted for a share of 65.4% of total investment cost of projects in the region, valued at USD 11.2bn. Outflows from the UAE still accounted for 38.2% of GCC’s share of foreign investments in Q1 this year[3]. 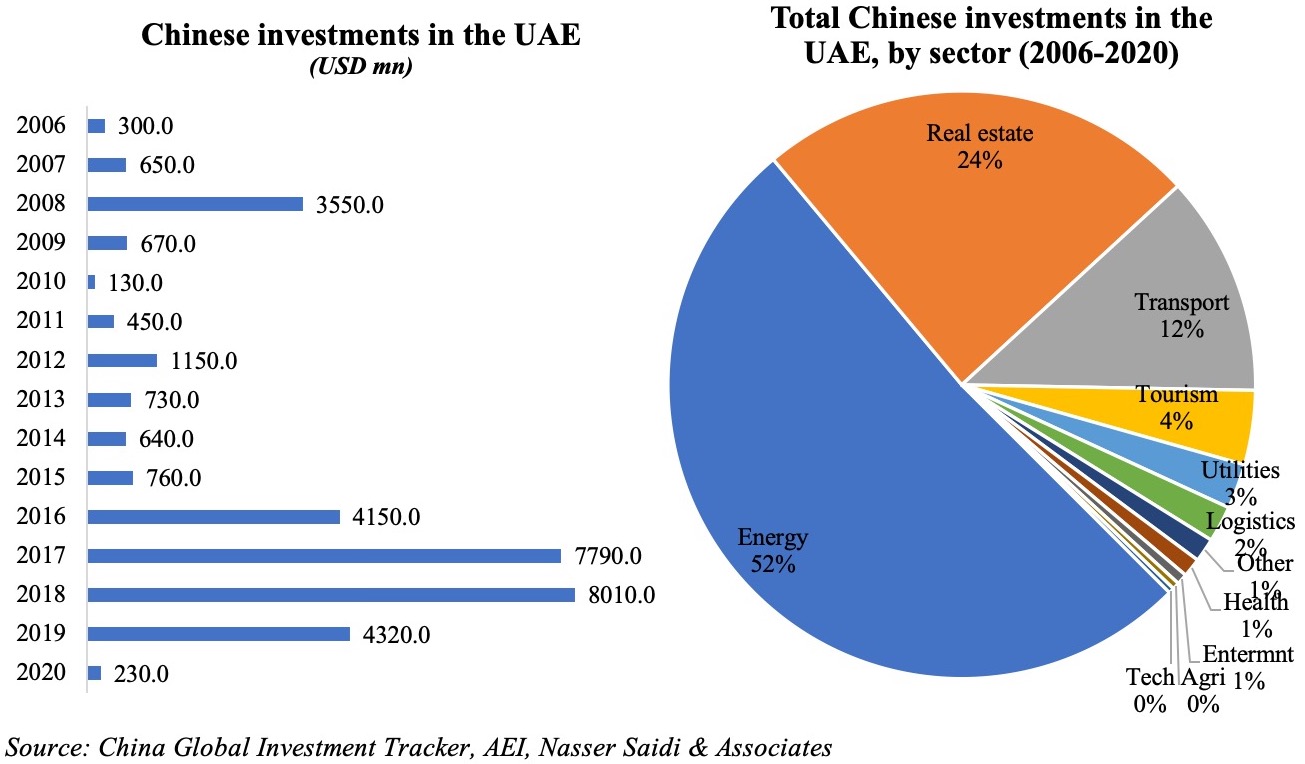 China’s investments in the UAE have been rising, with UAE the top destination country (among Arab nations) accounting for more than one-third of C 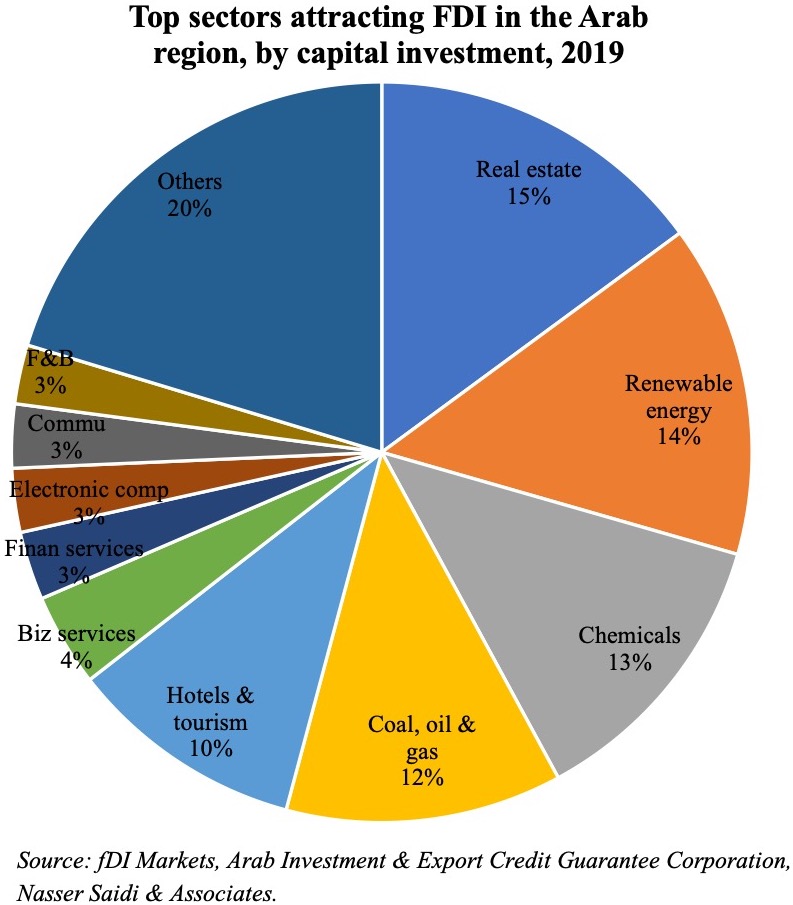 hinese projects tracked during Jan 2003-Mar 2020 (with the number of projects in double-digits in 2018 and 2019). According to AEI’s China Global Investment Tracker, the value of Chinese investments touched a high of USD 8bn in 2018, thanks to a handful of large projects (including with ACWA Power and Abu Dhabi Oil). Sector-wise, investments were concentrated in energy (both oil and gas as well as renewables), real estate and transport – together accounting for 87.8% of total investments during 2016-2020. This is largely in line with FDI inflows into the Arab region as well, with the top 5 sectors (real estate, renewables, chemicals, oil & gas and travel & tourism) accounting for close to two-thirds of total inflows in 2019.
For the oil producing & exporting countries of the GCC and the wider MENA, the broader trade and investment landscape was further disrupted (in addition to Covid19) as a result of the profound changes in the structure and dynamics of the energy sector and market. The deep recession and Covid19 lockdown and induced collapse in transport and travel led to a sharp fall in the demand for oil and cratering of oil prices. Fossil fuel prices are unlikely to recover even in the medium term due to the increasing competitiveness of renewable energy (solar, wind and geothermal), persisting competition from shale oil & gas and new fossil fuel discoveries, while climate change mitigation policies and greater energy efficiency are leading to a downward shift in the demand curve for fossil fuels.  Accordingly, returns on investment in oil and gas (O&G) will decline. The implication is that FDI into the traditional O&G in the UAE and the GCC will be on a downward trend. The challenge will be to attract FDI into viable, sustainable economic diversification sectors and projects.
The new post-Covid19 FDI landscape for the UAE will likely be boosted if the recently announced deep structural reforms are executed well, alongside a review of existing economic strategies. The next obvious step is greater regional integration – a GCC common market (to start with), allowing for free movement of both labour and capital – as well as formalizing trade and investment treaties with major partners including China.