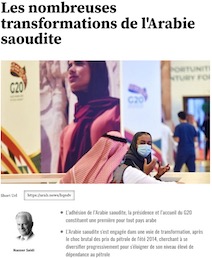 The article titled “Saudi Arabia’s Many Transformations” appeared in a special G20 edition prepared by Arab News French. The oped piece (in French) can be accessed directly on AFN with the title “Les nombreuses transformations de l’Arabie saoudite”.

The English version is posted below.

Saudi Arabia’s membership, presiding and hosting the G20 is a first for any Arab country. This recognises and signals the global economic importance of Saudi Arabia, as well as its prominence as the biggest economy in the Arab world. Saudi is systemically important for the world’s oil markets: not only is it home to 17.2% of the world’s proven petroleum reserves, it is also the largest exporter of oil and plays a leading role in OPEC. It is a major international investor through its sovereign wealth funds, as well as a sustained source of remittances. Accordingly, the economic developments and prospects of Saudi reverberate across the Arab region due to its size, trade, investment and remittances links to other GCC countries and to labour and/or non-oil exporters. Saudi is systemic for the region.

Saudi Arabia has embarked on a transformation path, following the sharp oil price shock in the summer of 2014, aimed at gradually diversifying away from its high level of dependence on oil. This resulted in the launch of the Vision 2030 and National Transformation Plans about 4 years ago. The country undertook major initiatives including fiscal and structural reforms (energy price reforms, spending rationalisation, introduction of VAT and excise taxes), capital market reforms (ranging from opening up of Tadawul, launch of Nomu parallel market for growth companies, deepening the domestic Sukuk market) as well as social reforms (greater opportunities for women), opening up new sectors – entertainment, hospitality, tourism beyond- and strategically, undergoing a transition to moderate Islam. Reforms are being gradually implemented, but the Covid19 pandemic, the Great Lockdown and fallouts from the decline in oil prices have underscored key new challenges.

A “New Oil Normal” has emerged. Even prior to Covid19, weakening global energy demand, an energy transition was underway. Technological innovation has increased the competitiveness of shale oil and renewable energy, increased supply and constrained OPEC+’s ability to control prices. On the demand side, growing energy efficiency, COP 21 commitments have brought about significant behavioural and policy changes, implying a downward trend in oil demand relative to activity. The prospect of plentiful fossil fuel (including shale), with increasingly ubiquitous, cheap renewable energy, along with energy transition policy and regulatory measures, portends permanently lower real oil prices and threatens Saudi’s medium and long-term growth prospects.

Decarbonisation policies aiming at mitigating the risks of climate change will reinforce the drivers of the New Oil Normal by systemically lowering demand for fossil fuels. In addition, climate change has deep implications for Saudi Arabia and the MENA region. Desertification and extreme heat conditions are increasing, along with growing water scarcity. According to the World Bank, climate-related water scarcity is estimated to cost the region 6 to 14% of its GDP by 2050, if not earlier, and widespread droughts could potentially lead to “water wars”. Rising sea levels is expected to put about 24 port cities at risk in the MENA region.

Despite the growing evidence of climate change, financial markets have not fully priced in climate risk.  This is likely to change. A shift in market sentiment will lead to a Minsky Moment resulting in a sharp drop in the price of fossil fuel assets. This poses an existential threat and risk for Saudi Arabia (though it is of the world’s lowest cost producers), that its fossil fuel reserves, its prime source of wealth, become stranded assets, investments which are no longer able to earn an economic return due to low oil prices.

Two other deep forces are transforming the global economic landscape. New technologies (digital, 4th industrial revolution, AI, robotics) are leading to structural economic and social changes, transforming consumer and producer markets, agriculture, manufacturing and services. Digitalisation is becoming ubiquitous. By contrast, globalisation, the handmaiden of the growth of international trade, foreign investment, portfolio flows and the movement of people, arrested by the Global Financial Crisis, is being reversed by the forces of populism, nationalism and the Covid pandemic.  How should Saudi react to these multiple challenges? A new growth lifting and diversification strategy is required.

First, Saudi Arabia needs to accelerate its diversification path away from oil through decarbonisation and de-risking fossil fuel assets. Decarbonisation requires a ‘Green Deal’, a low-carbon energy transition plan, the phasing out of energy subsidies and the introduction of carbon taxes to reduce consumption, and including a major drive to accelerate investment in and adoption of renewable energy and Clean Tech policies by both government and private sectors. Already Saudi is planning to invest some US$ 20 billion to develop 30GW of renewable energy by 2025. Aramco’s part-privatisation and opening upstream and downstream fossil fuel assets to PPP should be accelerated. These investments & divestments can fuel the development of Saudi’s capital markets to become a regional, if not a global centre, for green bonds and Sukuk, for green and climate finance.

Saudi’s comparative advantage in solar energy can be the basis for a new energy infrastructure and new exports, enabling Saudi to shift to selling renewable-energy-based electricity to Europe (via an interconnected power grid), to East Africa, but also to Pakistan and India. Technology can also be used in climate risk mitigation, ranging from AgriTech (e.g. desert agriculture, vertical farming) to smart water management (in cities, households, industry and agriculture) to green/ sustainable construction and buildings. Through their linkages, building clean and smart cities will accelerate Saudi Arabia’s move to embrace innovation and technological progress. Importantly, these investments are job-creating: each million dollars invested in renewables or energy flexibility is estimated to create at least 25 jobs, while each million invested in efficiency creates about 10 jobs[1]. A green deal, investment in renewable energy, climate resilient infrastructure and cities and using instruments to transfer climate risks to markets (carbon taxes and carbon trading) can be transformative for the Saudi economy.

The other building block is digitalisation, the national deployment of broadband and 5G to support a digitalised economy & society with investments in smart grids, smart city technologies and the deployment of new digital technologies, low-cost cloud computing, the IoT, AI and big data analytics. Digitalisation would raise efficiency and galvanise growth in government, services and industry, augment the domestic and international connectivity of the Saudi economy, create new jobs and activities, raise overall productivity and economic growth. Digitalisation of the banking & financial sector would enable FinTech to widen access to finance within Saudi and Islamic finance to the global Islamic community.

To counter the forces of deglobalisation, Saudi needs to be the driving force for greater regional economic integration with a focus on removing the ‘soft barriers’ to trade & investment and integrating infrastructure and logistics: energy, water, transport & logistics, digital highways in the GCC, but also MENA countries with infrastructures gaps (Egypt, Iraq, Jordan, Lebanon) and East Africa.  Saudi should formalise it’s shifting trade and investment patterns towards Asia and China through new trade and investment agreements with China, Japan, Korea, and the newly formed RCEP area. Greater regional and international integration would enable Saudi Arabia achieve its Vision 2030 targets and propel the nation to new heights within a transforming global economic landscape. Saudi has many transformations ahead.