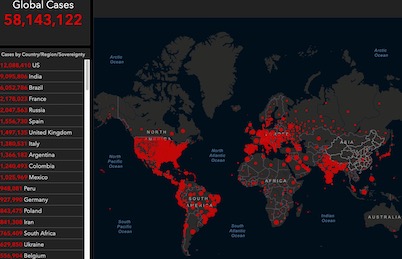 Download a PDF copy of this week’s economic commentary here.
Markets
Equity markets picked up on optimism from positive results from the Covid19 vaccine trials:  Stoxx600 and UK FTSE posted strong monthly rallies, while Japan’s Nikkei touched its highest level since Jun 1991. In the US, rising Covid19 deaths and the “tussle” between the Fed and Treasury on extending emergency funding programs beyond end of this year resulted in weekly losses. In the region, markets were mixed with UAE and Saudi the biggest gainers, while Qatar and Egypt fell by 1% compared to a week ago. Among currencies, as the dollar dropped to more than a 1-week low, both pound and euro gained. Oil prices inched up, posting a third week of gains and ahead of the OPEC+ meeting end of this month, while gold price posted a weekly loss.
Weekly % changes for last week (19-20 Nov) from 12 Nov (regional) and 13 Nov (international). 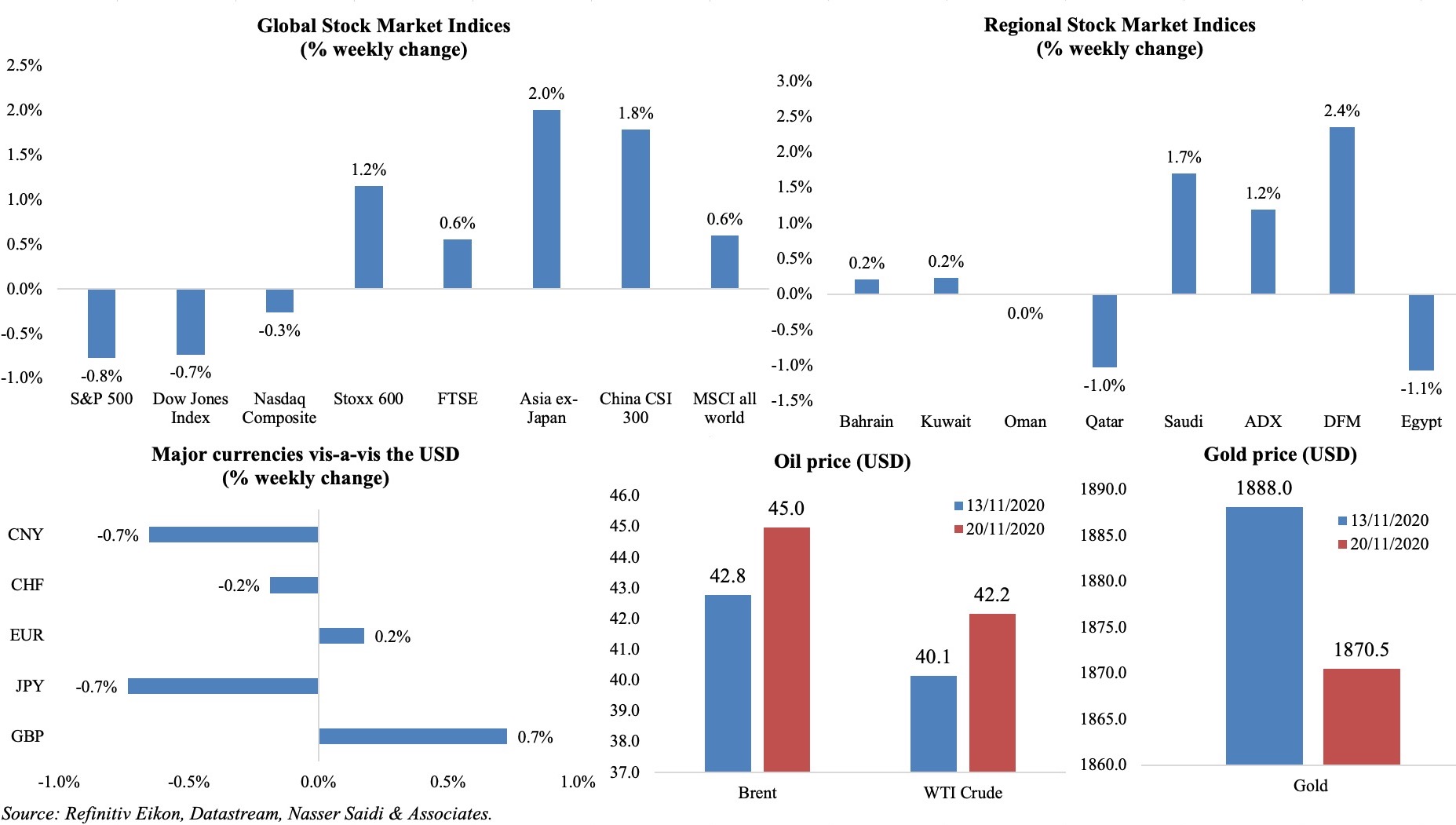 Bottom line: UNCTAD expects global FDI to post a U-shaped recovery in 2022 amid expectations of a V-shaped recovery in trade and global growth. The WTO’s latest goods barometer report signaled trade resilience in recent months – consistent with the trade forecast of a 9.2% decline in trade volume this year – though the lockdowns in Q4 are likely to cause a further slowdown in demand. With global Covid19 cases inching closer to 60mn, it is prudent to be cautious in optimism: in spite of the promising vaccine trials, it remains to be seen how soon these vaccines can be circulated across the globe. Even in the US, with delays in the transition, process of distributing vaccines could be unnecessarily hindered.
Regional Developments

Media Review
A no-brainer for the G20
https://www.project-syndicate.org/commentary/g20-must-fund-covid19-aid-act-accelerator-by-jim-o-neill-2020-11
China goes from strength to strength in global trade
https://www.piie.com/blogs/china-economic-watch/china-goes-strength-strength-global-trade
Current sovereign debt challenges and priorities in the period ahead
https://www.imf.org/en/News/Articles/2020/11/16/vc111620-current-sovereign-debt-challenges-and-priorities-in-the-period-ahead
Why inflation could be on the way back
https://www.ft.com/content/dea66630-d054-401a-ad1c-65ebd0d10b38
Ten trends to watch in 2021
https://www.economist.com/the-world-ahead/2020/11/16/ten-trends-to-watch-in-the-coming-year
China’s post-pandemic revival has been stoked by coal-powered industry, jeopardizing Xi’s climate pledge
https://www.ft.com/content/d452aef8-9fd7-422a-a034-4558f0e66e53
Where are the world’s most expensive cities?
https://www.economist.com/graphic-detail/2020/11/18/where-are-the-worlds-most-expensive-cities