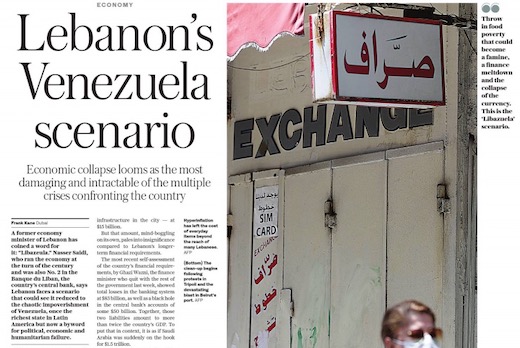 Dr. Nasser Saidi’s comments appeared in the Arab News article titled “Can Lebanon avoid the Venezuela meltdown scenario?”, published 25th August 2020.
Comments are posted below:
A former economy minister of Lebanon has coined a word for it: “Libazeula.” Nasser Saidi, who ran the economy at the turn of the century and was also No. 2 in the Banque du Liban, the country’s central bank, says Lebanon faces a scenario that could see it reduced to the chaotic impoverishment of Venezuela, once the richest state in Latin America but now a byword for political, economic and humanitarian failure.
“Lebanon is on the brink of the abyss of depression, with gross domestic product (GDP) declining by 25 percent this year, growing unemployment, hyperinflation, humanitarian disaster with poverty exceeding half of the population,” Saidi told Arab News.
“Throw in food poverty that could grow to famine conditions, and a continuing meltdown in the banking and financial sectors, and the collapse of the currency, all leading to mass migration. This is the ‘Libazuela’ scenario.”“With Lebanon being the fulcrum of a geopolitical confrontation between the US and Iran, local actors will play strategic games at the expense of an expendable Lebanese population,” Saidi said.
Saidi is not optimistic this [genuine commitment by Lebanese leaders to reform] will come to pass. “The reform scenario requires concerted pressure by the international community, including the imposition of personal penalties and sanctions, on Lebanese bankers and politicians and policymakers for the implementation of reforms,” he said. “The entrenched kleptocracy, a corrupt political class, banking and financial sector cronies are unwilling to make reforms that would uncover the extent of their corruption, criminal negligence and incompetence. Currently, the Libazuela scenario is more likely.”