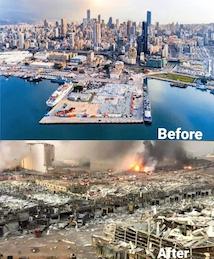 Dr. Nasser Saidi’s comments appeared in the article titled “After blast, Lebanon’s ‘uninvestable’ banks face sector rebuild, depositor pain“, published by S&P Global Market Intelligence on 12th August 2020.
Comments are posted below:
“Lebanon doesn’t have the fiscal space to fund the reconstruction of the public sector infrastructure destroyed in the explosion, and has no ability to borrow either because no one will lend to the country,” former vice-governor of the Lebanese central bank Nasser Saidi told S&P Global Market Intelligence. He said the banks will need to restructure, sell assets and consolidate.
“The bankers and the central bank are trying to resist that and push the burden of adjustment on to the government and depositors,” said Saidi, who has also held the positions of Lebanon’s minister of economy and trade, and of industry, and is president of consultancy Nasser Saidi & Associates.
“The banking system will have to be restructured,” said Saidi. “Banks will have to downsize, sell the assets they hold abroad and repatriate the proceeds, sell their real estate holdings, and rebuild their balance sheets if they want to stay in business … there will be M&A.”
Saidi estimates that about 60% of Lebanon’s debts are due to interest rate increases designed to protect the pound, and criticized the central bank for failing to officially devalue the currency.
Saidi said Lebanon could solve the crisis by enacting capital controls, unifying the pound-to-dollar exchange rate, restructuring state-related debts and removing general subsidies. Up to $30 billion is needed to restructure the public sector, and a further $25 billion to restructure and recapitalize the banking sector, he said.