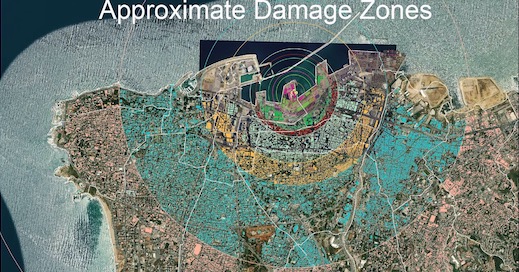 The Beirut blast and its recovery/ reconstruction dominate news in the Middle East. Our take on the path for Lebanon’s economic recovery is part of this Weekly Insight edition. Given the scheduled global PMI releases last week, we take a close look at the region’s PMIs and Mobility indicators in parallel. Also covered are the latest monetary indicators from Saudi Arabia and FDI flows in the Arab region (Q1 2020).

The Beirut port explosion on Aug 4th – which left at least 158 people dead, 6000 injured and 300k homeless – was possibly the last straw for the people already immiserated by an economic, banking & financial meltdown (since Oct 2019) alongside dealing with the Covid19 outbreak. The explosion led to calls for resignation of the government (three ministers have resigned, including after the blast, citing failure to reform), with demonstrations gaining traction over the weekend. In addition to the loss of human lives and destruction of buildings (homes and businesses), it is critical to understand the importance of the ports: 80% of the country’s food imports come through the port, in addition to medical supplies as well as oil and gas. The silos have been demolished (which hold 2-3 months supplies of grain), leading to shortages of food (& higher prices – food inflation had surged by 108.9% in H1 2020 and by 250% in Jun 2020); expedited imports of food and fuel will also be constrained by damaged logistics (transport and warehouses). Additional cuts in electricity (given the impact on fuel supplies) will negatively affect hospitals (that are fighting the Covid19 outbreak in additional to normal operations) and businesses.
Damage to infrastructure (port, transport, logistics and related facilities), housing and businesses is extensive. A detailed survey will be required to assess the total costs of reconstruction but it is clear that Lebanon does not have the fiscal space and will require international support. The destruction will further depress economic activity through a negative impact on consumption, investment and export activity. We forecast an overall reduction in real GDP by some 30% (Great Depression levels) along with continuing and potentially accelerating inflation.  Beirut’s governor stated (without presenting evidence or survey estimates) that the repair bill for the capital alone will cost up to USD 5bn while overall cost of damages is estimated at around USD 15bn. The Cabinet’s approval of an exceptional allocation of LBP 100bn [or USD 26.3mn at the central bank’s set rate of LBP 3,800 to the USD at money transfer firms] to deal with the crisis will fall way short of requirements. International donors pledged EUR 252.7mn for humanitarian aid at the Paris conference yesterday held to raise emergency relief for Lebanon. President Macron during his visit to the location stated that he would “propose a new political pact” to all political forces in Lebanon, also assuring that aid would “not go to corrupt hands”.
The way forward is to undertake a comprehensive series of macroeconomic reforms, including at various sectoral levels – ranging from reforms of the power sector to the banking sector, to exchange rate reform alongside an active intent to increase transparency and stamp out corruption. So far, there has been a refusal by the authorities to bite the bullet and undertake reforms. The donor conference yesterday (as well the CEDRE pledges in 2018) are promising: but the aid should only be released within the umbrella of a broader IMF programme – with clear conditionalities of reform (and potentially bringing in independent ‘technocrats’ to form a new government). The country is in urgent need of an equivalent of a Marshall Pan (size of USD 25-30bn and growing), given cumulative losses owing to lack of reforms so far. 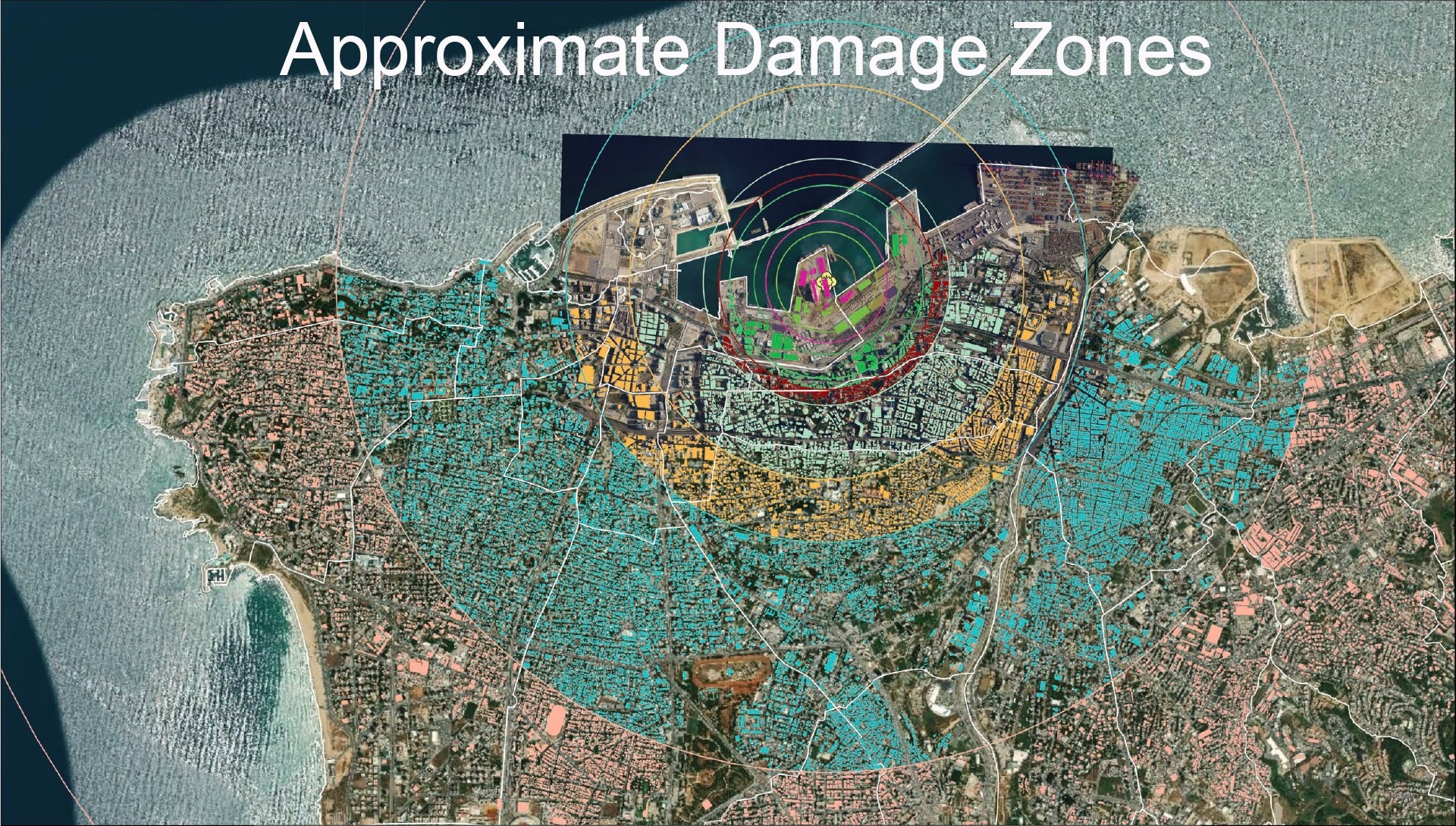 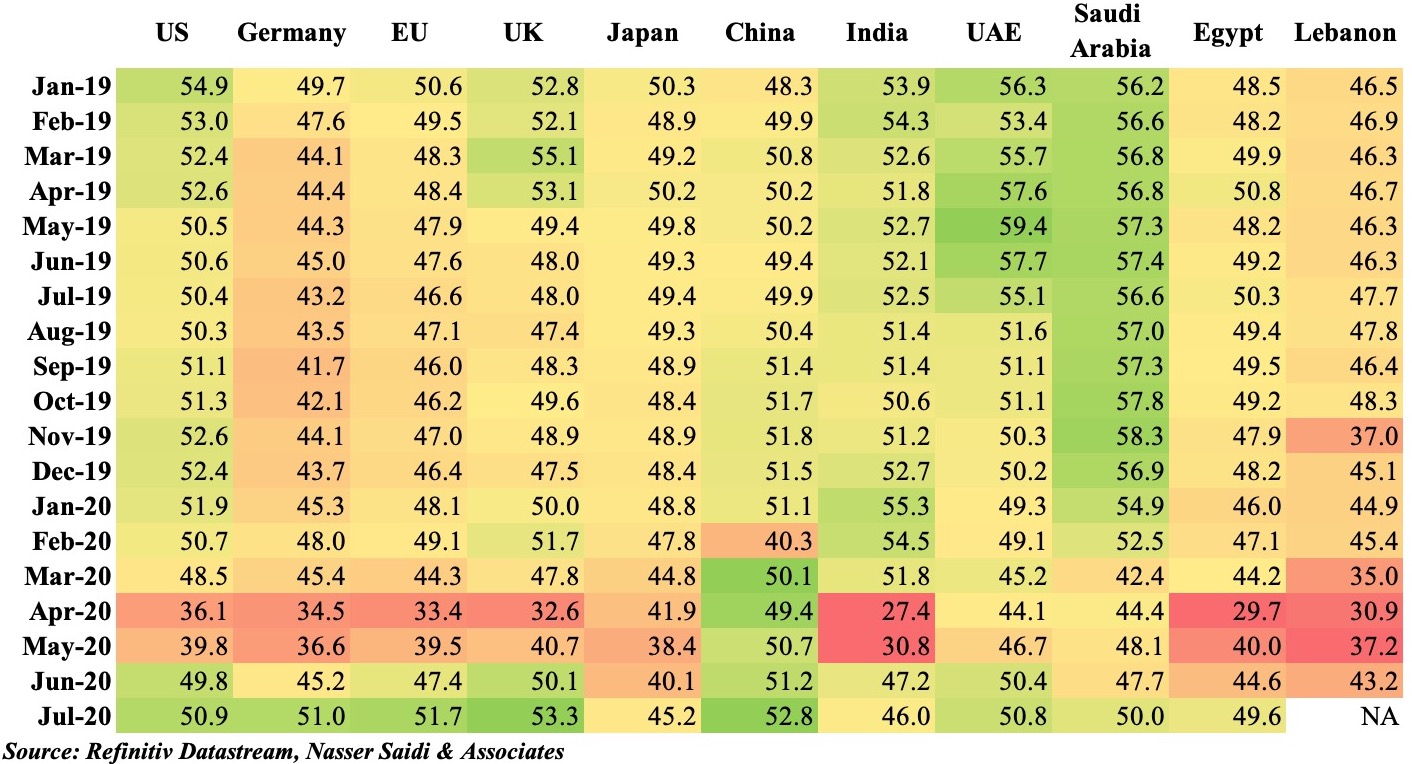 Global manufacturing PMIs mostly ticked up, given rebounds in both output and new orders. India was one of the nations reporting a lower PMI in Jul: unsurprising given the fast pace of Covid19 confirmed cases – it took only 9 days for India to go from 1.5mn to 2mn – and restricted lockdowns in parts of the country. In spite of the V-shaped recovery in PMI, all is not smooth: restrictions have not been eased fully, demand is largely domestic-driven, and supply chains issues remain – average vendor delivery times lengthened for the 12th consecutive month for global manufacturing PMI. A resurgence in cases/ 2nd and 3rd waves will only add to the burden.

PMIs in the region indicate a sharp V-shaped recovery following the lockdown period, but is it too much optimism from those surveyed? Order books have improved, though export orders remain weak, indicating domestic demand driving the rise.
This is reflected in the retail and recreation segment of the Google Mobility indicators: with less stringent restrictions in place, movements were higher in the days running up to the Eid Al Adha holidays (across the three nations) while in Saudi Arabia, a similar trend was also visible towards the last week of June, ahead of Jul’s hike in VAT. For firms in the retail and recreation sector, social distancing measures are likely to eat into the firms’ profits (if any) and the road to recovery is likely to be slow. In spite of marketing efforts, it will be affected by spending capacities, salary reductions/ cuts in allowances/ job losses & return of expat labour to their home countries (e.g.~500k Indians have registered for repatriation flights from the UAE).
Workplace mobility is still around 20% below the baseline numbers (excluding Eid holidays): widespread availability of telework technology and the feasibility of performing work remotely has kept firms operational. However, those sectors where work from home is not the ideal option (think retail, tourism, hospitality), the learning curve has been steep – e.g. retail firms’ rolling out previously unavailable online options.
Bloomberg reported that while working from home, workdays were longer by 48.5 minutes, with 1.4 more emails sent to colleagues per day and an 8% increase in emails sent after hours (questioning the work-life balance and happiness quotient) though offering more flexible work hours (and potentially higher productivity levels). The UAE government’s announcement of flexible working hours for its staff is a good move to raise productivity, reduce peak hour traffic and can act as a precursor for the private sector to emulate. The obvious next step is providing the option for employees to work from home, when possible – think of either shorter work hours (in the office) daily or working from home a full workday during the week.

Monetary statistics for Jun 2020 in Saudi Arabia reinforce the trends from the Mobility indicators in the previous panel. Both indicators of consumer spending – cash withdrawals and point-of-sale (POS) transactions have ticked up in Jun, ahead of the hike in VAT from July 1st. Loans to the private sector is picking up, thanks to the various measures in place to support the economy as it tackles the Covid19 outbreak. Initiatives like the provision of concessional financing for SMEs and loan guarantee programme likely supported the faster pace of growth. The Corporate Sustainability Programme launched by the Ministry of Finance mid-Jul to support the private sector will also provide support going forward. The final chart tracks new letters of credit opened, by sector – an insight into trade finance. A letter of credit is a financial instrument, usually issued by a bank, which guarantees the seller will receive payment for goods sold to a foreign customer. The Covid19 outbreak put the brakes on activity from Apr-May. Recovery is visible in June’s data, but the difference is stark: LoCs opened for foodstuffs has been rising faster than say motor vehicles (accounted for 25.6% of total in Jan 2020 vs 7.2% in Jun). It is time to switch trade finance to blockchain technology – which will make trade faster, safer, and simpler (elimination of paperwork and associated costs, increased transparency and prevention of fraud)!

In Q1 2020, the number of new FDI projects in the Arab region contracted by 30% yoy to 185 projects in Q1 2020, with investments down by 27.3% to USD 11.2bn while job creation slipped by 23% to 21.3k, according to the Arab Investment & Export Credit Guarantee Corporation (Dhaman). GCC’s share of investments in the Arab region show that Saudi Arabia and UAE together account for 86.6% of the total in Q1 this year. FDI flows are likely to slow in the region this year, mirroring global trends: UNCTAD estimates global FDI inflows to decline by USD 1.1trn this year. The slowdown of implementation of ongoing projects will hurt prospects in the region as well as potential shelving of projects in the near- to medium-term – underscoring the need to diversify sectors into which FDI flows (oil and gas & real estate).
Egypt, UAE and Saudi Arabia together accounted for two-thirds of the FDI inflows into the Arab region during the period 2015-2019 though in terms of number of projects, UAE topped the list (41.4% of the total). The top two sectors attracting investments – coal, oil and gas and real estate – together account for almost half of the total investments (from just 7% of total number of projects). The largest number of FDI projects recorded during 2015-19 were in business services (13%) and financial services (11%) – but its share of investments was only 2% each. 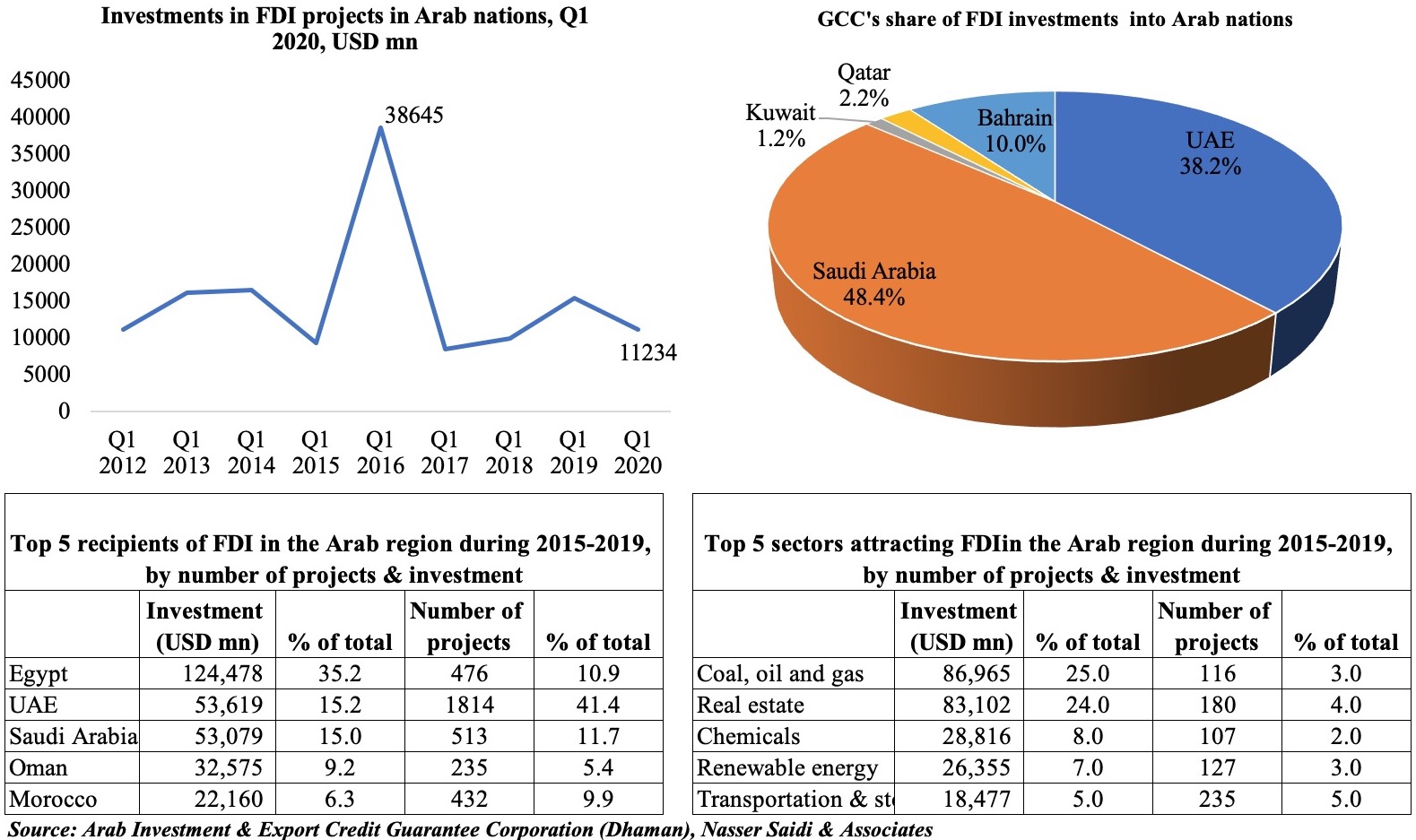