Are mergers the way ahead for the GCC’s airline industry post pandemic? Opinion Piece in Gulf Business, Aug 2020

This article appeared in the print edition of Gulf Business, August 2020, which can be accessed online.

Flying together: Are mergers the way ahead for the GCC’s airline industry post pandemic?
Cost cutting measures by airlines will not suffice to stem the hemorrhage
Covid-19 has devastated the global aviation industry along with the tourism and hospitality industry. Even though domestic travel resumed in many nations (in Saudi Arabia, US and China among others) and flying restrictions eased (e.g. intra-Europe flights, UAE’s Etihad and Emirates are each flying to over 50 destinations), 42 per cent of all global commercial airlines fleet are still grounded, according to research by Cirium [at the time of going to press]. It is little wonder that the International Air Transport Association (IATA) forecast a 55 per cent decline in traffic levels this year. According to IATA, airline passenger revenues are expected to drop to $241bn in 2020, a 50 per cent decline compared to 2019. This is likely to be an underestimate. Covid-19 has generated the deepest recession in advanced economies since the great depression. Its deadly waves are still unfolding in Africa and Latin America, destroying demand for travel, with a second wave likely, according to epidemiologists.

Markets have reacted accordingly, with the Refinitiv global airlines price return index down by almost half (as of July 13). By end-June, Zoom’s market capitalisation of $72.44bn was worth more than the combined $62bn value of AA, Southwest, Delta, United, IAG (BA), Air France-KLM and Lufthansa. In May, Singapore Airlines reported its first loss in its 48-year history, while many airlines are under severe financial stress or have filed for bankruptcy (Latam, Avianca, South African and others), Chapter 11 protection, or are being restructured (Thai). The US provided a massive $58bn to rescue its airline industry.

To survive the post-Covid-19 world, the aviation sector – including airlines, airports and aircraft manufacturers – will have to be restructured. Despite chatter about “travel bubbles” and “immunity passports”, experts question whether recovered patients are fully immune. About 33 per cent of respondents to an IATA survey (conducted in the first week of June 2020) suggested that they would avoid travel in future as a continued measure to reduce the risk of catching the virus. For now, one of the major deterrents to travel is the quarantine period: only 17 per cent of the survey respondents were willing to stay in quarantine. If no vaccine is discovered, people will refrain from travelling abroad, with local destinations and road trips preferred. Social distancing will become the norm on flights, reducing available seat capacity by 33-50 per cent, reducing passenger load factors and raising questions about economic efficiency and financial viability.

The triple whammy of lockdowns, low oil prices and financial market turbulence has dealt a severe blow to the Middle East. The lockdown has directly impacted the UAE’s trade, tourism, transport and logistics sectors, which lie at the core of its diversification strategy and its role as a global business hub. Similarly, Saudi Arabia may need to review its development plans that include tourism as a key diversification option. The travel and tourism sectors have been critical to the GCC with the sector contributing $245bn to GDP (roughly 8.6 per cent) in 2019, while supporting nearly seven million jobs, according to the World Travel and Tourism Council. With more than half of the total GCC population consisting of internationally networked and mobile expatriates, the spillover and multiplier effects to the overall economy from the post-Covid-19 world requires structural adjustment and revision of diversification policies.

The GCC countries – with five airlines each in Saudi Arabia and the UAE, alongside Oman and Kuwait with two airlines each – have rapidly expanded their international networks in recent years. With small domestic markets and populations, the strategy has ended up subsidising foreign travellers. As international and regional travel remains highly restricted, the airlines’ revenue streams have all but evaporated. According to the latest estimates from IATA, wider Middle East and North Africa (MENA) traffic is estimated to fall by 56.1 per cent year-on-year in 2020, resulting in a $37bn loss in net post-tax profit. This will risk over 1.2 million jobs (half of the region’s 2.4 million aviation-related employment) and cause a $66bn shortfall in contribution to the region’s GDP. Saudi Arabia, Qatar and the UAE are the most exposed.

How should GCC airlines adjust to the massive loss of revenue? Like other airlines globally, Emirates, which expects at least 18-months for a recovery of travel, has grounded much of its fleet, placed employees on unpaid leave, cut the salaries of its workforce by up to a half, and initiated job cuts to reduce its operating costs of some $23bn. The CEO of Qatar Airways disclosed an estimated 55 per cent drop in revenues from last year, and stated that about 20 per cent of its workforce would be cut.  Job losses in Saudia are also estimated to be very steep, with the Saudi government providing support by suspending airport slot use rules for the summer season and extending licences and certifications for crew, trainers and examiners. However, the cost cutting measures by the airlines will not be sufficient to stem the hemorrhage.

The majority of GCC airlines are fully government owned. How can they support their airlines? Should the governments consider a bailout? Already, in a bid to tackle the crisis, large stimulus packages amounting to some 18 per cent of GDP are being rolled out across the GCC, including a combination of fiscal measures along with central banks’ monetary and credit packages. But with oil revenues accounting for more than 55 per cent of total government revenues in the UAE and over 70 per cent in Saudi Arabia and Bahrain – according to the IMF – the drop in crude prices is being felt strongly. And with the decline in other revenues (including VAT, taxes and fees), a bailout for the airlines – while supportive of the sector – would imply a massive increase in budget deficits. The GCC cannot afford a bailout of their airlines, given the impact of Covid-19 and oil prices on budgets, with the IMF forecasting 2020 average deficits of 10.5 per cent for the region.

The case for mergers
The alternative and better policy for adjustment is through a combination of consolidation, downsizing and mergers. The UAE, Saudi and other countries should consider merging their airlines, which would achieve large cost savings and optimise revenue streams. Given that the governments fully-own or control the airlines, mergers and consolidation allows for a smoother and less costly adjustment process: no anti-trust considerations, labour disputes or having to realign cultural differences.

The economic rationale behind mergers is multi-faceted: it allows for (a) economies of scale: given that the airlines’ functions and operations (including back office functions, maintenance and support services etc) are largely identical, as are their Airbus and Boeing fleets; (b) cost reductions from the rationalisation of networks – Etihad and Emirates fly to more than 100 destinations in common, leading to cannibalisation and costly competition. A merger would reduce redundant flights and increase passenger load factors while optimising route planning and reducing competition for other passenger and cargo services; (c) more effective and intensive utilisation of existing fleets and airports; (d) scaling down to increase productivity; (e) phasing out airport expansion plans by avoiding duplication of services.

The bottom line is that a restructuring and merger of the flagship carriers within the GCC nations and their low-cost airlines would achieve substantial overall cost savings, strengthen the combined groups, make the merged airlines regionally and internationally more competitive and avoid duplication of costly bailouts at a time when the region lacks the fiscal space.

The aviation industry, with its massive investments in airports, airlines, transport and logistics, has been at the core of the efforts of the GCC countries to diversify their economies through tourism, hospitality, trade and infrastructure services. Covid-19, low oil prices and the global recession are threatening the viability of these diversification strategies. Structural reforms (such as airline mergers and consolidation) and economic policy readjustment will be required for a sustainable post-coronavirus future. The current crisis poses an unprecedented opportunity for consolidation and rationalising of government spending, while also reviewing the structure of state-owned enterprises and government-related entities. 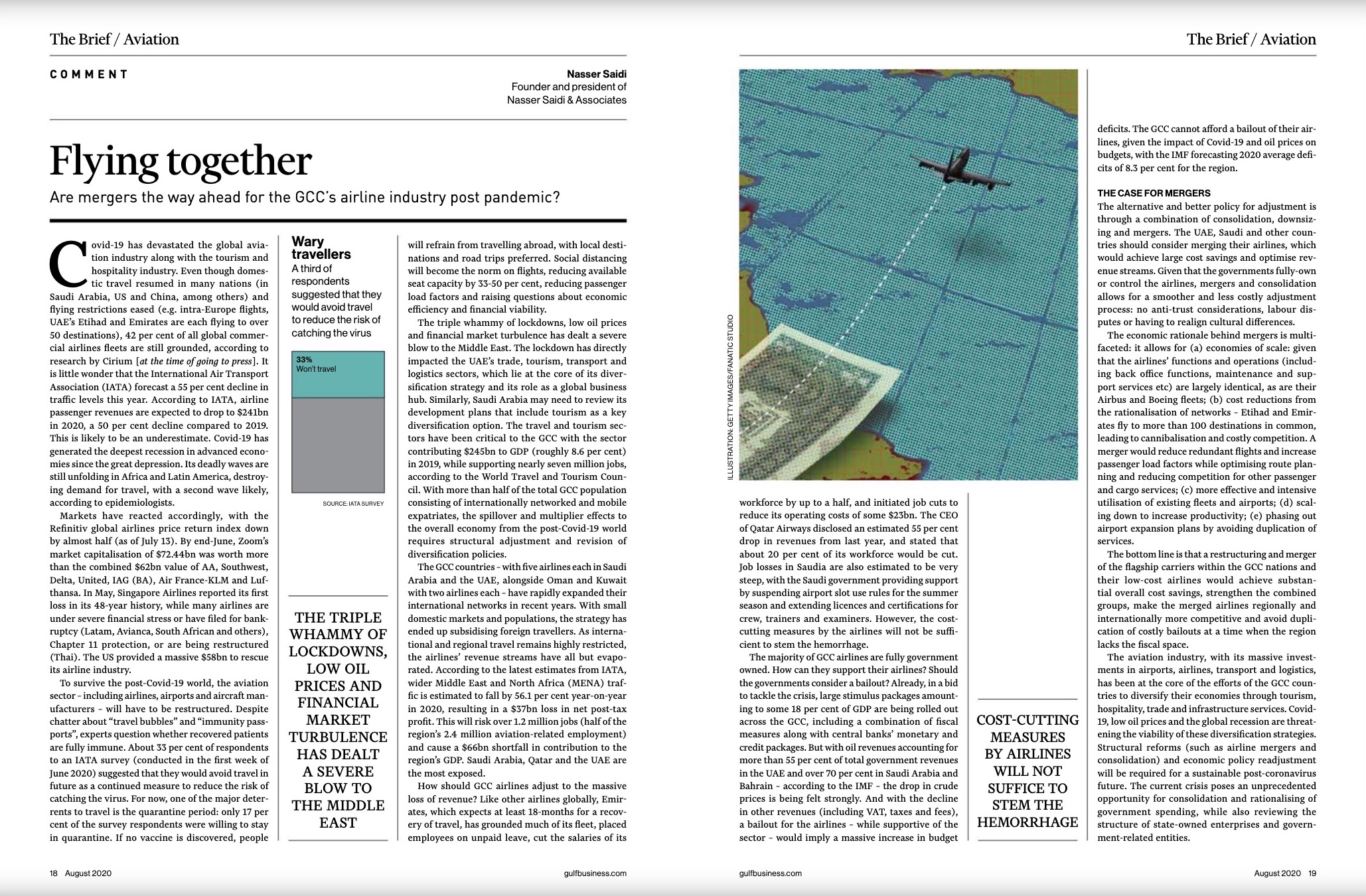