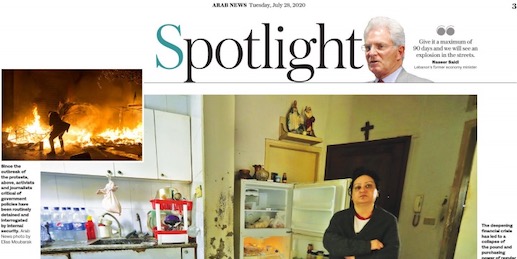 “The view of the Hirak (Lebanon’s protest movement) is that we probably need a total breakdown before we can change things,” said Nasser Saidi, Lebanon’s former economy and trade minister and founder of Nasser Saidi & Associates. “I love this quote from Giuseppe Tomasi Di Lampedusa: ‘We have to change everything if nothing is to change.’

“It’s only when it becomes practically unliveable that you are going to get change. But if you look at the experience of other countries in similar situations, two things are comparatively different. The first is that, politicians always shift the discourse to a pro-communitarian versus pro-sectarian, pro-Syrian versus anti-Syrian, pro-Iranian versus anti-Iranian, pro-8th of March versus pro-14th of March, pro-Hariri versus anti-Hariri thing,” he said.

“Once the country’s ruling elites frame the current crisis in sectarian and confessional terms, all the other initiatives concerning reform will go out the window.

“The second thing is to change the narrative. As protests amplify, the ruling elite will say that this is now a matter of national security.”

All of this may be already happening. On June 25, President Michel Aoun delivered a speech on Lebanon’s stability, in which he referred darkly to an “atmosphere of civil war” and portrayed the anti-government protests as an attempt to stir up sectarian discord.

“Ever since we have come to life in this country or in most of the Arab world, we have been told that security and stability is paramount to our survival,” said Saidi. “Any challenge to the existing order is framed as a challenge to security and stability. But once you use that argument, then you can start using the repressive forces of the state, and this is precisely what is happening today in Lebanon.

The breaking point, said Saidi, will come in early September. “Give it a maximum of 90 days and we will see an explosion in the streets. Hospitals will start closing, schools and universities will not be able to open. People cannot afford to send people to school. You will most likely no longer have electricity and once you no longer have electricity, everything else will break down, including communications.”

Saidi believes Lebanon’s ruling elites will try to divert attention from the increasing misery in the country.

“The misery index, which is the sum of the unemployment rate and the inflation rate, in Lebanon now is over 100 percent,” he said.

Pointing to central bank losses of $50 billion and reports of unorthodox accounting practices by the bank’s governor, Saidi said: “They are refusing to admit that they made mistakes, that there are embedded losses in the system, that there was a Ponzi scheme by the central bank — the banks benefited from this, and the shareholders of the banks and big depositors benefited from it.

“What’s most significant is that they got their money out with the connivance of the central bank. Individuals who have their deposits or income in Lebanese pounds have seen their wealth and income go down by around 70 percent. The only other cases I have seen like this are following hyperinflation after the two world wars in Europe and the end of the Soviet Union. There is now a destruction of the middle class in Lebanon, as happened in the 1980s.”

Lebanon’s only hope lies with reform, Saidi said. “There will be no help from outside, from other Arab states or Europe, or the IMF and the international community, until reforms are made internally.”