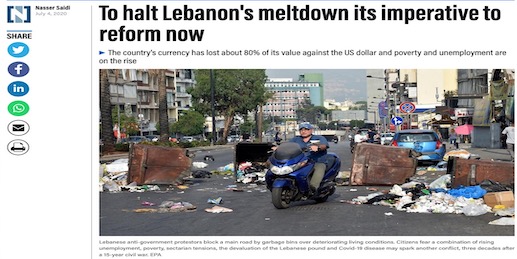 The article titled “To halt Lebanon’s meltdown it is imperative to reform now” was published in The National on 4th Jul 2020. The original article can be accessed here & is also posted below.

To halt Lebanon’s meltdown it is imperative to reform now

Lebanon is in the throes of an accelerating economic and financial meltdown. Unsustainable monetary and fiscal policies and an overvalued pegged exchange rate led to persistent fiscal and current account deficits.

Public debt which reached more than 155 per cent of gross domestic product in 2019, is projected rise to 161.8 per cent in 2020 and 167 per cent in 2021, according to International Monetary Fund estimates. That is the third highest ratio in the world after Japan and Greece.

Informal capital controls, foreign exchange licensing, freezing of deposits and payment restrictions to protect the dwindling reserves of Lebanon’s central bank, precipitated the financial crisis, generated a sharp liquidity and credit squeeze and the emergence of a system of multiple exchange rates.

The squeeze is severely curtailing domestic and international trade and resulted in a loss of confidence in the monetary system and the Lebanese pound. Multiple exchange rates created distortions in markets and new opportunities for corruption. The result is a sharp, double-digit contraction in economic activity, consumption and investment, surging bankruptcies, and rapidly rising unemployment rates estimated at above 30 per cent.

A dangerous inflationary spiral has gripped the country with the currency’s value against the dollar nosediving as much as 80 per cent. Inflation is on the rise and reached an annual 56 per cent in May, according to Lebanon’s Central Administration of Statistics. A Bloomberg survey of economists conducted in June, projects inflation will average 22 per cent in 2020 compared with a forecast of 7.7 per cent from a previous survey.

The minimum wage has shrunk from the equivalent of $450 per month while food prices have surged. Since the end of a 15-year civil war in 1990, extreme poverty has hovered at between 7.5 to 10 per cent, while about 28 per cent of the population is poor, according to the World Bank. In November, the World Bank warned if the economic situation in the country worsened, those living below the poverty line could rise to 50 per cent.

Given the collapse of the long-maintained peg, there is no anchor for expectations of the future value of the Lebanese pound.

The Central Bank of Lebanon does not have the reserves to support the pound. There is great uncertainty concerning the macroeconomic outlook, fiscal and monetary policies, exchange controls and structural reforms.

The government approved a rescue plan, the basis for negotiations with the IMF, but failed to set a credible roadmap for structural reforms and none of the promised reforms have been undertaken. There is a loss of confidence in the banking system and in macroeconomic and monetary stability. As a result, people want foreign currency to protect themselves, as a hedge against inflation and further depreciation of the pound.

Transfer restrictions have led to a sudden stop of capital inflows and remittances from Lebanese expatriates, who fear their transfers will be frozen. Remittances accounted for 12.9 per cent of GDP in 2019.

With capital and payment controls and lack of intervention by the central bank, the foreign exchange market became a cash market with little liquidity, therefore highly volatile and subject to large fluctuations, rumours and panic.

Two short-term factors have compounded the currency crisis. The Covid-19 lockdown meant a loss of remittances that would have come in as cash. Media reports cite an accelerated smuggling of imported, subsidised commodities like fuel and wheat into neighbouring Syria these past months due to the increasing bite of international sanctions and a failing wheat harvest.

Panic prevails because of new US sanctions targeting Syria under the Caesar Syria Civilian Protection Act (the Caesar Act) that came into effect last month. Syrians are trying to hedge against inflation and the depreciating Syrian pound by tapping Lebanon’s forex market. In effect it is one market.

The vicious cycle is being fed by the monetary financing of budget deficits. Lebanon’s fiscal deficit increased 26.90 per cent in the first four months of the year to $1.75B from the year-earlier period. With the government unable to borrow from the markets, the central bank is financing the growing budget deficit and, increasingly, a growing proportion of government spending. The printing press is running, with a growing supply of Lebanese pounds on the market chasing a dwindling supply of US dollars. Hyperinflation looms. 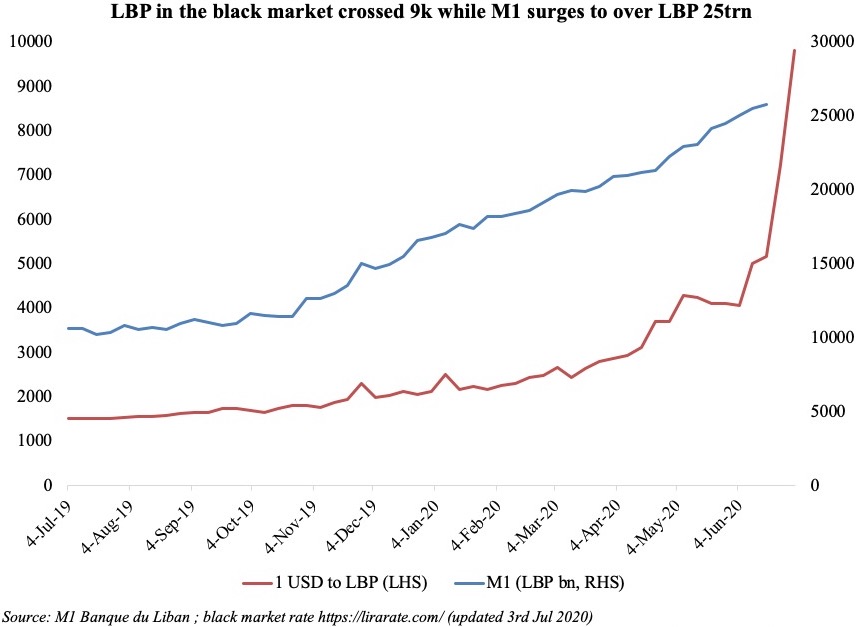 The deepening crisis requires urgent, decisive, credible, policy action. A capital control act should be passed immediately. That will help rebuild confidence in the monetary system and restore the flow of capital and remittances.

The prices of subsidised commodities and services (fuel, electricity) should be raised to combat smuggling and stem the budget deficit. Smart and targeted subsidies are more effective. The impact of removing general subsidies is less painful than financing budget deficits that accelerate overall inflation and exchange depreciation. Exchange rates need to be unified within a central bank and bank organised market.

Most important, is rapidly agreeing and implementing a financial rescue package with the IMF. That should be based on a comprehensive macroeconomic-fiscal-financial reform programme that includes structural reforms, debt, and banking sector restructuring, which would provide access to liquidity, stabilise and revive private sector economic activity.

Nasser Saidi previously served as Lebanon’s minister of economy and industry and a vice governor of the Central Bank of Lebanon. He is president of the economic advisory and business consultancy Nasser Saidi & Associates.