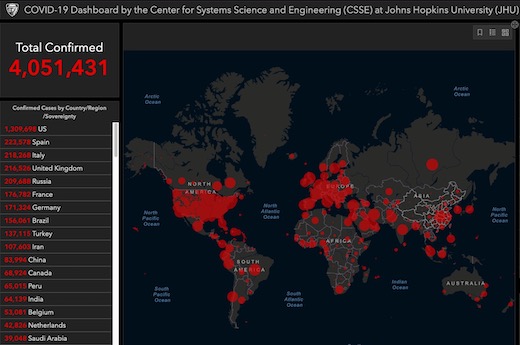 “Weekly Insights” is a collection of macroeconomic charts of recent regional macro data.
Markets
Stock markets gathered steam last week, hitting weekly highs on Fri, rallying in spite of weak macro data across the board and Covid19 cases crossing the 4mn mark. There is a growing disconnect between equity markets and the deep recession of real economic activity in the US, Europe and globally. The resumption of trade negotiations between US and China resulted in some renewed optimism, that was also reflected in Asian markets. Regional markets mostly ended in the red last week. Among currencies, dollar gained versus the euro and swiss franc. Oil prices edged up, posting a second week of gains, on output cuts and hopes that ease in COVID19 restrictions will slowly revive demand, while gold price hovered near a 2-week high.
Global Developments
US/Americas:

Bottom line: Macroeconomic data remains weak, and given that Covid19 infections are still widespread, a gradual ease in restrictions is unlikely to return business activity to pre-Covid19 levels: expect a longer path to economic recovery, more an extended U-shaped, than a previously touted V-shaped recovery. Last week saw the release of disappointing PMIs across the globe: global manufacturing PMI slumped to the lowest level since financial crisis of 2008-09, with output and new orders down to near-record lows while employment fell at the quickest pace in almost 11 years. Though business sentiment remains low, as nations slowly ease restrictions, look for signs of how fast global supply chains recover (will order volumes increase – both domestic and international?).
Regional Developments 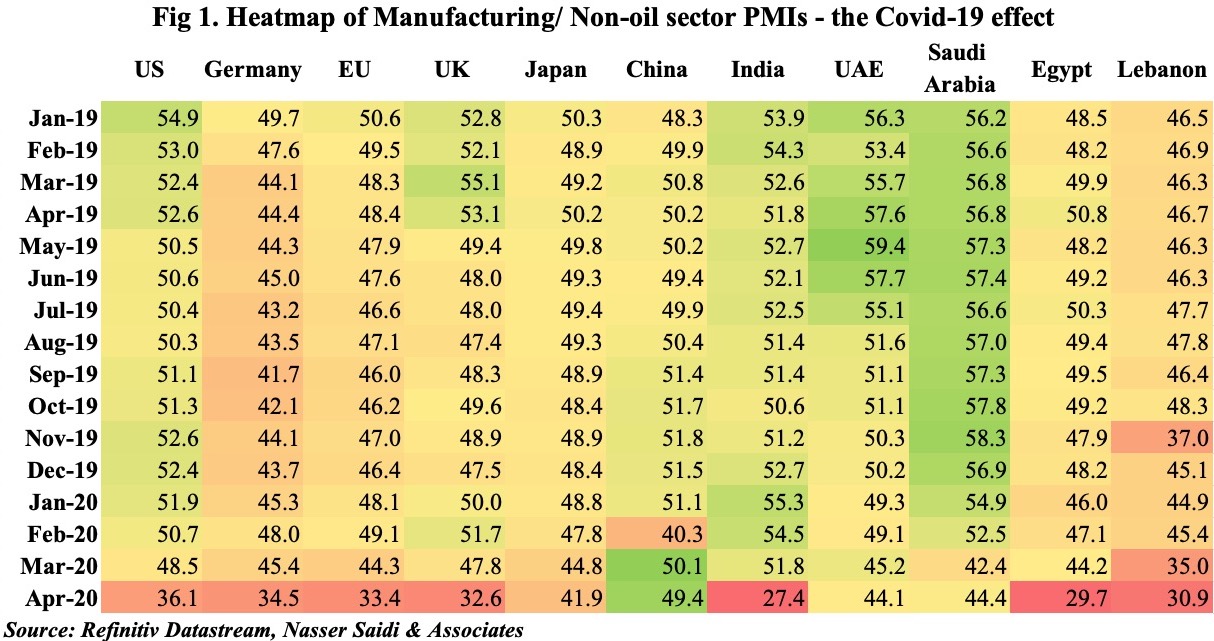 PMIs have declined as a result of dips across output, new export orders and employment. With trade flows slowing across the globe, supply chains have taken a hit and delivery delays have become the new normal along with delays in payment of invoices. Average payment terms increased to 37.4 days in Q1 2020, from 2019’s average 36.7 days, as per Tradeshift data. With the lack of orders during the lockdown, this situation will only worsen in the coming months.
Fig 2. Services sector PMI in Europe drops further to record lows 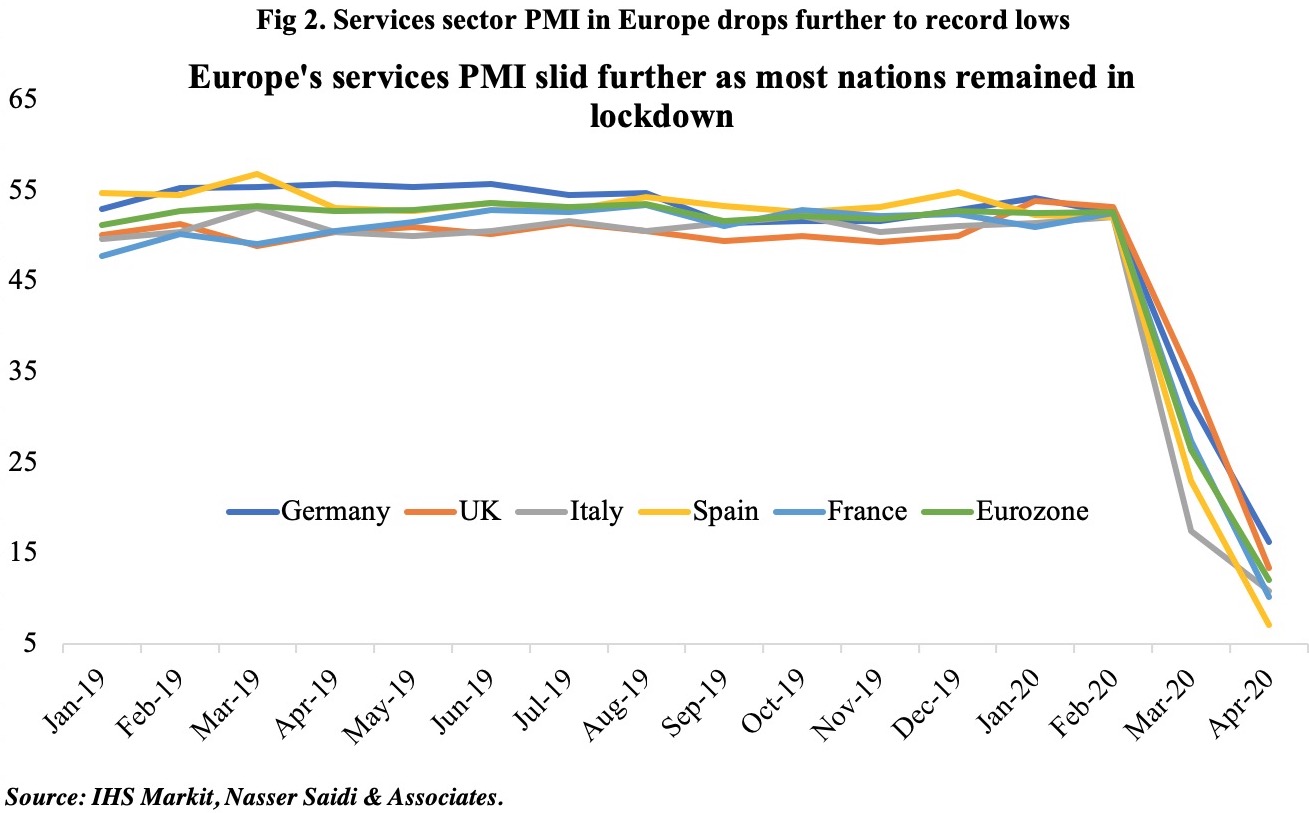 Other than in Sweden (which is following a herd immunity policy with no lockdowns), most European nations had seen a near shutdown of its major services industries in Apr. Restrictions have been eased in the past weeks, with France set to ease rules from May 11th. The Google Mobility reports indicate that trips to workplaces continue to remain 40-60% below pre-crisis levels while trips for retail and recreation have fallen by more than 80% in many. As long as no vaccine is announced, we believe that a return to pre-Covid19 levels will take time as health concerns are likely to outweigh the policy responses to kickstart the economy (like availability of interest rate loans and/or tax rebates or mortgage refinancing options).
Fig 3. The number of unemployed continues to surge in the US

More than 33 million persons have filed for unemployment since mid-Mar and jobless rate has more than tripled to 14.7% in Apr. Payrolls data show leisure and hospitality hit hard with around 7.7mn job losses while retailers cut 2.1mn jobs. With no coordinated national policy to fight the Covid19 outbreak, politics continues to play havoc as stimulus packages are left undecided upon (given the fiscal price) and local/ county/state are clashing on decision to ease restrictions and reopen for business. Macroeconomic data meanwhile continue to remain weak.
Fig 4. Businesses re-open in the GCC, but will activity recovery amidst job losses?
The contribution of the non-oil sector to GDP remains relatively smaller to the oil sector in the GCC. Among the non-oil sector, the share of manufacturing, construction and real estate, wholesale and retail trade, along with transport and communication together account for around 40% of total GDP – all sectors directly impacted by Covid19. Even as businesses open (albeit at lower capacity with low footfalls), anecdotal evidence suggests that shops and restaurants within malls are losing money by remaining open. Furthermore, job losses are adding up (repatriation flight numbers as a proxy) as are reports of closures of small businesses (e.g. restaurants, tour operators). Given that most visas are still linked to jobs in the region (in spite of select few in the UAE and Saudi Arabia), a job loss essentially implies that a family moves back to their homeland, resulting in loss of income for real estate (housing), retail (food, clothing etc.) as well as education (schools, colleges) among other sectors – essentially a multiplier effect on the overall economy. 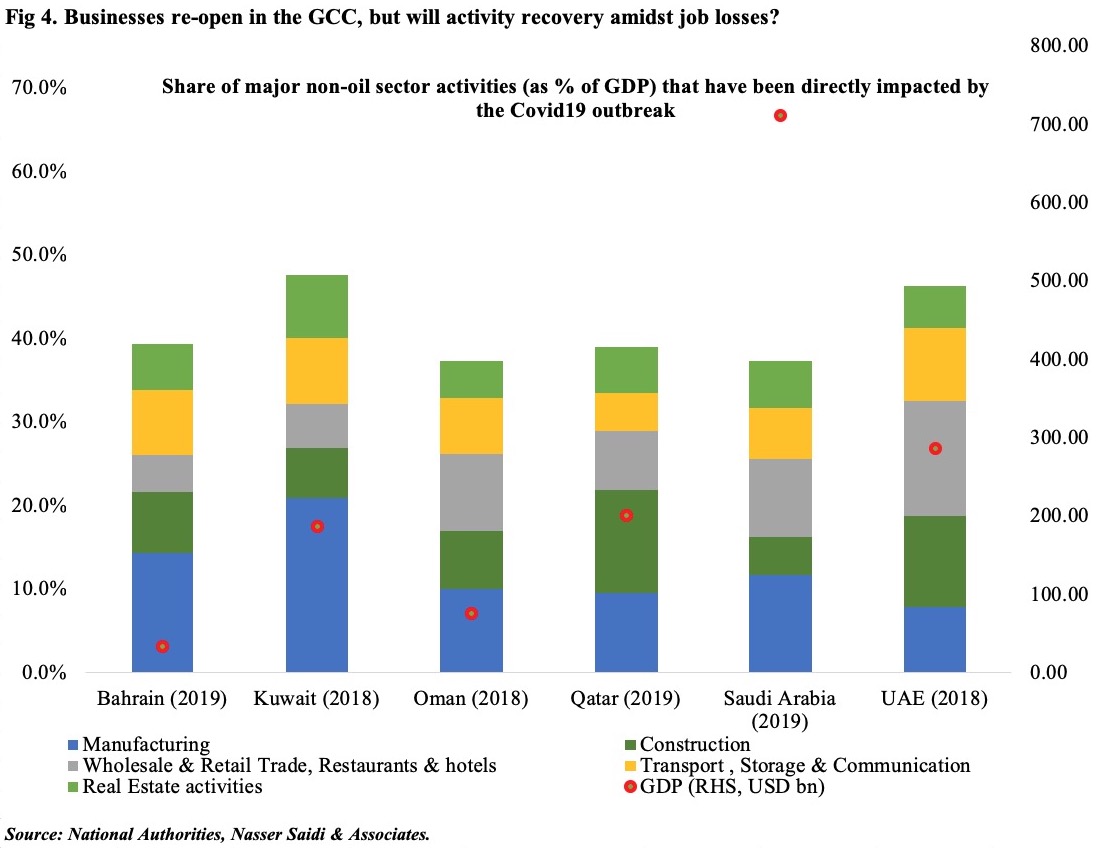 Media Review
The Market Keeps Distancing itself from the Economy
https://www.bloomberg.com/opinion/articles/2020-05-07/weekly-jobless-claims-highlight-market-economy-decoupling
The world’s food system has so far weathered the challenge of covid-19
https://www.economist.com/briefing/2020/05/09/the-worlds-food-system-has-so-far-weathered-the-challenge-of-covid-19
US and China: edging towards a new type of cold war?
https://www.ft.com/content/fe59abf8-cbb8-4931-b224-56030586fb9a
Have real-time data helped us address the crisis? | Chicago Booth Review
https://review.chicagobooth.edu/economics/2020/video/have-real-time-data-helped-us-address-crisis
Gulf debt market shows signs of recovery as issuers line up
https://www.reuters.com/article/mideast-debt/mideast-debt-gulf-debt-market-shows-signs-of-recovery-as-issuers-line-up-idUSL4N2CN2L6
GCC faces expat exodus
https://www.reuters.com/article/us-health-coronavirus-gulf-jobs/whats-the-point-of-staying-gulf-faces-expatriate-exodus-idUSKBN22J1WL
https://www.nytimes.com/2020/05/09/world/middleeast/virus-forces-persian-gulf-states-to-reckon-with-migrant-labor.html