This week’s “Weekly Insights” is a pictorial representation of the week’s key macroeconomic data releases.
Markets
Another negative week for markets as Covid-19 cases cross the million-mark, with US, Italy and Spain recording the maximum confirmed cases and deaths. Weak macro data in the US (non-farm payrolls, unemployment) and EU (PMIs/ business activity) led to sharp declines in the stock markets as well. Hopes of an oil ceasefire between Saudi Arabia and Russia led to an increase in the oil price (20%+ on Thurs), ending the week higher after 5 consecutive weeks of declines while also supporting stock market movements (benefiting Saudi’s Tadawul). Other regional markets ended in the red as the impact of Covid19 became more widespread given lockdowns across many nations (and districts). The dollar gained during the week as evidence became stronger that the global economy was headed for a recession in H1, while the euro declined by close to 3%. Gold prices closed slightly higher versus the week before.
Global Developments
US/Americas:

Bottom line: As macroeconomic data continue its disappointing run across much of Europe and the US, countries and central banks are simultaneously rolling out unprecedented stimulus packages to counter the impact of the Covid19 outbreak. Though the banking sector has been tasked with supporting SMEs during these troubled times, it remains to be seen if these monies eventually filter out to those in need (additional input on Gulf banks in the Media Review section). China’s latest PMI readings seem to be very positive – but remember that not all businesses in China have returned to normal capacity, global demand is still weakening, and supply chain links are still broken. Global PMI fell by a new record of 6.7 points to 39.4 (the lowest since Feb 2009) while the service sector’s decline was the steepest in 22 years. Meanwhile the oil price war continues to splutter after some positive moves towards end of last week. The IMF also warned that the economic impact of the Covid19 pandemic would be worse than the 2008 financial crisis.
Regional Developments 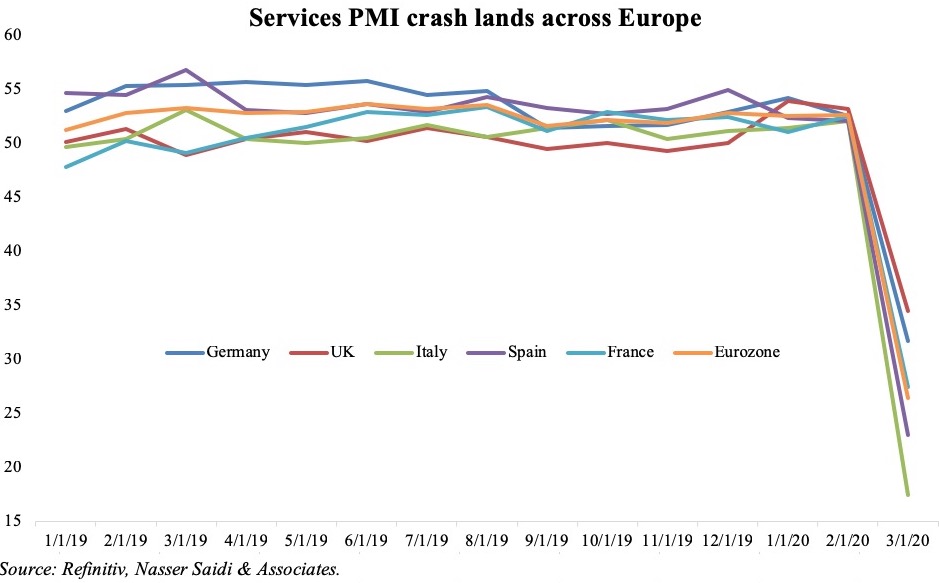