This week’s “Weekly Insights” is on the ongoing oil price war, lower oil prices and its economic impact on the Middle East amid the Covid19 epidemic.

Markets
Friday saw global financial markets suffer their worst day since 1987’s Black Monday: the MSCI all-country world index entered bear market territory (https://tmsnrt.rs/39UsofJ) while world markets lost nearly USD 18trn from Feb’s peak (https://tmsnrt.rs/2TRkFti). The VIX volatility index and corresponding measure of volatility for the Euro Stoxx 50 hit their highest since the 2008 financial crisis. Equity markets in the region closed in the red last week, with GCC investors losing more than AED 150bn on Sun (when markets opened after the failure of OPEC+ talks on production cuts). As safe haven currencies, the JPY and CHF strengthened (https://tmsnrt.rs/2xGgs35), the Indian rupee touched a record low, and other emerging market currencies like the Indonesian rupiah, Thai baht and South Korean won lost ground as well. Oil prices continued to decline on news of higher production plans from UAE and Saudi Arabia while the gold price ended the week with a loss of 8.6%, the most since Mar 1983.
Global Developments
US/Americas:

Weekly Insights: Middle East – adjusting to lower oil prices amid the Covid19 epidemic
A double-edged sword: the Middle East has to adjust to the ongoing oil price war in addition to providing adequate stimulus to support their domestic economies taking a hit from Covid19 while also rolling out measures to curb its spread. The crash of oil prices, sharp fall in global growth and Covid19 effects will put severe strains on both oil and non-oil revenue sources in the Middle East (including VAT, real estate fees, tourism and trade).
The How, Why and When? At the OPEC+ meeting on Mar5-6, Russia and Saudi Arabia sparred over the extent of production cuts in the backdrop of lower global oil demand due to the spread of Covid19. OPEC had already slashed its expected growth in global oil demand this year, recommending a massive production cut in Q2 in order to maintain prices. The disagreement flared into an outright price war, with Saudi Arabia announcing discounts (of as high as USD 8) to northwest Europe and other big consumers of Russian oil alongside an increase in oil production to 12.3mn bpd (versus the current 9.7mn bpd). Russia was not far behind in announcing that it could add between 300-500k to raise output to 11.2mn bpd. Later, Aramco confirmed that Apr output levels would reach 13mn barrels per day and the UAE also announced a ramp up in its oil production. This is likely to bring about a shift in the market share of top crude oil producers (Saudi, UAE): shale oil had flooded the market during the OPEC+ production cuts phase (resulting in US becoming the largest oil-producing country) though at current prices, shale oil producers face a potential collapse (via production cuts, layoffs and/or bankruptcies) given their higher production costs.
What next? The price of Brent crude plunged by 24%, to USD 34 a barrel, on Mar 9th, posting its steepest one-day drop in nearly 30 years; oil is down by about 50% since the start of the year. While Saudi Arabia has the capacity to increase production, various other players in the region will be hard-hit, especially Oman and Bahrain in the GCC with their high breakeven oil prices, rising fiscal deficits and debt. For the oil exporters, not only would lower oil price mean lower revenues and potential higher fiscal deficits, but it will also result in spillovers into the non-oil sector (which is already negatively affected by the Covid19 outbreak). In addition to a debt overhang of around USD 500bn in the GCC, it will also be increasingly difficult for sovereigns to finance their deficits through borrowing as access to markets will become more difficult and expensive. Last, but not least, there will be a negative impact from financial markets: domestic equity markets have already taken a hit (with GCC investors having lost more than AED 150bn last Sun) while the sovereign wealth fund portfolios would also be negatively affected given the stock market collapse globally.
Fig. 1. In search of higher market share (crude oil production, LHS) even as fiscal breakeven prices remain high in the still oil-dependent economies (RHS) 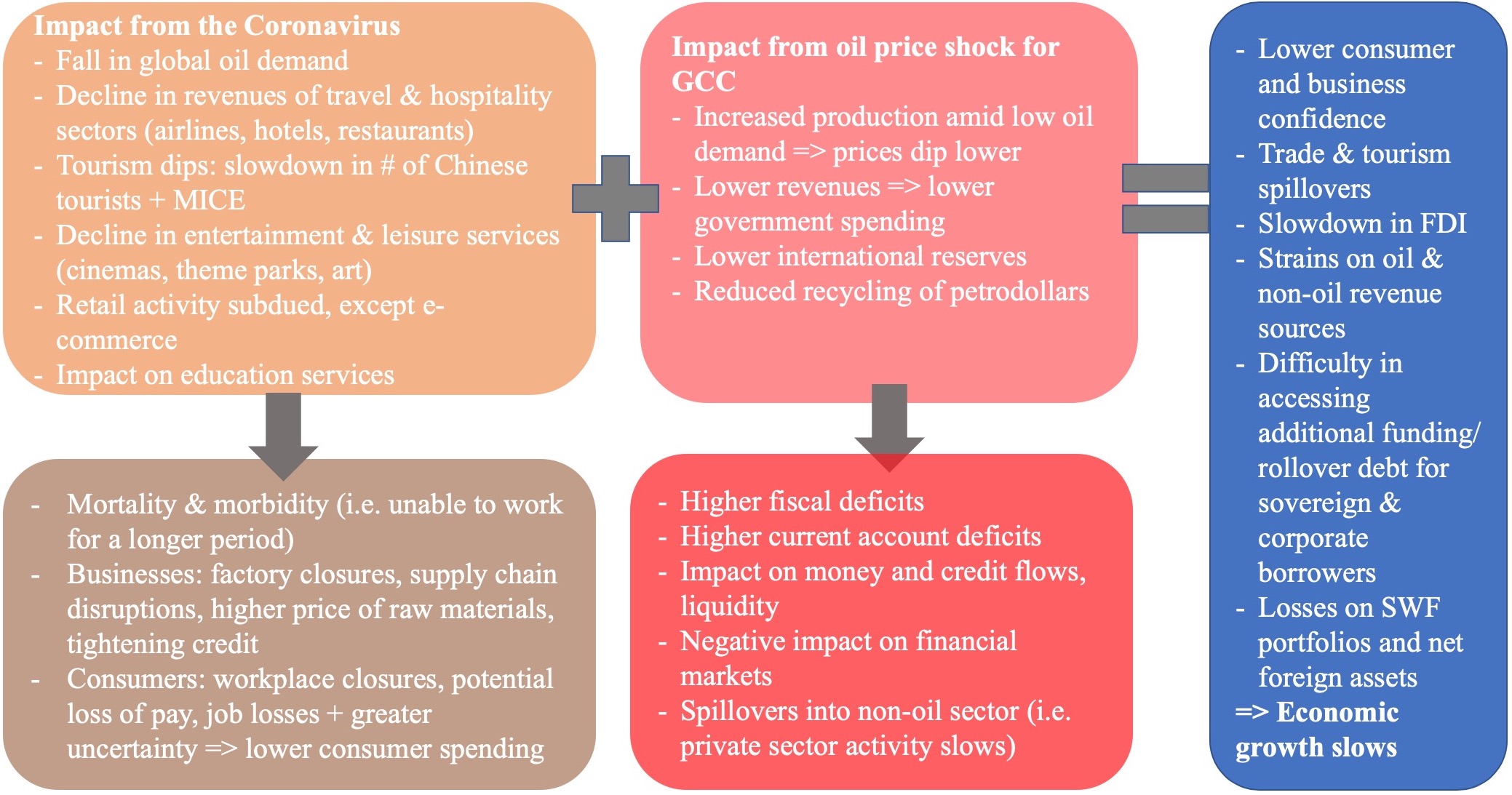