This week’s “Weekly Insights” is on the economic impact of Covid-19 on the Middle East & potential policy responses.
Markets
The Covid-19 outbreak continues to create havoc across capital markets: equity market sell-offs were rampant globally – European shares closed at near 7-month lows – except in China (where a two-year high was touched on Thursday, as investors expect more PBoC stimulus), while US Treasury prices rallied, with the yield on the benchmark 10-year government bonds dropping to a record low of 0.695%. Regional markets remained in the red, as Covid-19 cases increased, and travel restrictions were imposed. The dollar fell against a basket of currencies –worst week since 2016 – as traders bet further cuts following the emergency 50bps rate cut last week, while the flight to safe haven currencies JPY and CHF continued. Oil prices fell to a near 3-year low and posted biggest daily loss in more than 11 years on Fri after Russia rejected OPEC’s proposed steep production cuts. Gold posted the biggest weekly gain since Oct 2011.
Global Developments
US/Americas:

Bottom line: As Covid-19 spreads, with over 100k infected, rising number of cases and deaths outside of China, global growth rates are being slashed: OECD warns that the virus could halve global growth, while the IIF estimates growth at around 1% this year, far below 2019’s 2.6%. Global manufacturing slumped to 47.2 in Feb (Jan: 50.4) – its lowest level since May 2009, suffering its steepest contraction in over a decade as Covid-19 outbreak hits supply chains and demand. Lengthening of supplier lead times was a constant reference in PMIs across the globe as manufacturers adjust to the supply shock reverberating across the globe. Meanwhile, central bank meetings will be closely watched after the Bank of Canada and Fed’s 50bps move (US macro data is yet to show an impact from the virus) though the ECB and BoJ have limited room to manoeuver. While lower rates are unlikely to result in companies investing more (given current supply chain disruptions and weak demand), much more can be achieved by providing adequate fiscal support: with stimulus, governments can target spending where it is most needed (e.g. unemployment insurance, health spending, wage subsidies, tax reliefs).
Regional Developments

Weekly Insight on the economic impact of Covid-19 on the Middle East & potential policy responses
Since the Covid-19 outbreak surfaced two months ago, it has spread outside China and affected more than 100k persons globally. With the virus spreading faster globally – with Italy and Iran other major epicenters – in addition to lives lost, there is both a supply and demand shock. The supply shock will result from factory closures, supply chain disruptions, higher price of disrupted raw materials supply, along with tightening of credit, while weaker economic growth implies lower consumer spending (given workplace closures, quarantines), slowdown in aggregate demand and firms’ investment delays amidst higher uncertainty. The exact size of the shocks depends on the geographical spread, duration and intensity of the contagion. It is clear, however that (i) GDP growth will be lower than an already slow 2019; (ii) domestic demand will remain weak; (iii) inflation will be affected by an increase in inputs costs and goods prices and weaker demand will likely lower prices on retail spending and energy.
Initial reports suggest a slow resumption of production activity across China: The South China Morning Post reported yesterday that as of Tuesday, 45% of China’s small businesses, which account for 60% of GDP and 80% of employment, had reopened. However, the key is whether production and export capacity have been fully restored. The disruption has spilled over to many Asian countries – as evidenced by PMI readings – where the supply chain linkages are very strong. Taiwan dropped below 50, Vietnam fell to a more than 6-year low of 49 (highly dependent on China and South Korea for electronics components), while only Indonesia and Philippines reported an increase in PMI – at 51.9 and 52.3 in Feb respectively (highlighting their relatively lower exposure to China’s global supply chain and focus on food production).
Fig. 1. Heatmap of Manufacturing/ Non-oil sector PMIs – the Covid-19 effect

Source: Refinitiv Datastream, Nasser Saidi & Associates.
Closer home, the PMI data continue to show signs of a slowdown: Middle East nations are not that integrated with the global supply chain and linkages with China remain lesser compared to Asian counterparts. However, the camel in the room remains oil: the most direct impact of a Chinese and global slowdown is from the demand for oil. OPEC already slashed its growth in global oil demand this year to 480k barrels per day (bpd) versus expectations of 1.1mn bpd growth in Dec (given the supply overhangs, OPEC recommended a massive production cut in Q2). This will affect the oil exporters – for most of whom fiscal break-evens are substantially higher than the current Brent oil price of USD 45 per barrel: as per the IMF’s Fall 2019 estimate, Iran’s is as high as US$194.6 while the UAE and Saudi Arabia’s estimates are at US$ 70 and US$ 83.6 respectively. Furthermore, spillover effects have been visible in travel and hospitality (airlines and hotels are requesting staff to go on unpaid leave, hotels rates are being cut to off-peak rates), tourism (including MICE, given the number of cancellations/ rescheduling of major events), entertainment and leisure activities (movie theatres, theme parks and the like) and retail (though anecdotal evidence suggests an uptick in e-commerce activity).
Fig. 2. Impact of Covid-19 on the MENA region & Potential Policy Responses 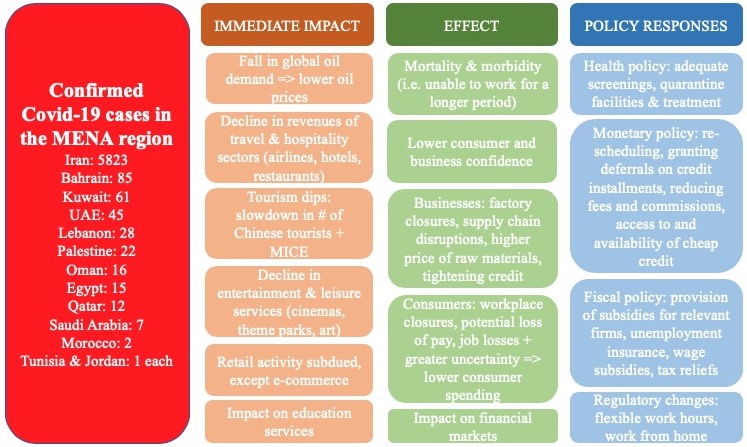 Source: Nasser Saidi & Associates. Covid-19 cases as of 8 Mar 2020 (reported by Johns Hopkins CSSE)
Major countries like Saudi Arabia and the UAE have been proactively fighting the spread of the virus with measures in place like closure of school/ universities as well as cancellation of large events (ranging from concerts to global events like Art Dubai). Saudi Arabia, being home to the Holy Mosques, announced temporary bans on the Umrah pilgrimages and that mosques would remain closed between the night and dawn prayers. With religious tourism one of the main sources of non-oil revenue for Saudi Arabia, this closure will have a significant bearing on economic growth: it would be much more prominent should such temporary bans/ restrictions be enforced when the Hajj season begins. The bottom line is that the GCC countries will suffer directly from the lower price of oil and from lower tourism and trade spillover effects.
Central banks, in spite of the peg to the dollar and lack of independence to conduct effective monetary policy, have been issuing effective guidelines to banks and financial institutions including advice to consider re-scheduling or granting deferrals on credit installments and/or reducing fees and commissions. If the outbreak persists, additional measures may include facilitating access to and availability of cheaper credit (especially for SMEs) and a case-by-case review of NPLs and/or defaults during the period.
The bottom line is that faced with a real supply shock and linked demand shock, fiscal policy stimulus is more likely to have a lasting impact to tackle the spillovers from the virus outbreak (e.g. subsidies for its international airlines) rather than monetary policy measures. This is a policy conundrum for the oil exporters of the region at a time when oil prices are also south-bound, unless the sovereign wealth funds are solicited to support, given the extraordinary circumstances.
Media Review
Lebanon’s Economy: To Avoid an Implosion
https://finance.yahoo.com/news/lebanon-economy-avoid-implosion-050529367.html
America Punished Elizabeth Warren for Her Competence
https://www.theatlantic.com/culture/archive/2020/03/america-punished-elizabeth-warren-her-competence/607531/
To Take on the Coronavirus, Go Medieval on It – The New York Times
https://www.nytimes.com/2020/02/28/sunday-review/coronavirus-quarantine.html
UK-listed companies face compulsory climate disclosures
https://www.ft.com/content/de915fb4-5f9e-11ea-b0ab-339c2307bcd4
Female work force participation is key to the Middle East’s economic development
https://www.thenational.ae/business/comment/female-work-force-participation-is-key-to-the-middle-east-s-economic-development-1.987027