This article titled “Female work force participation is key to the Middle East’s economic development” appeared in The National on 3rd March, 2020. The original article can be accessed here.

A young, fast-growing population should have been the cornerstone of growth in the Middle East and North Africa. It is the world’s second youngest region behind Sub-Saharan Africa with close to 60 per cent of the population under 30.
Young, fast growing populations provide a booming labour force and consumption market, fuelling economic growth. Instead, there is low growth and job creation is weak. This has led to rising levels of unemployment underlying the youth disenfranchisement, social and political unrest in 2011 and ongoing anti-government protests from Algeria to Sudan, and from Lebanon to Iraq.
The “demographic dividend” has been a curse instead of a boon. The prospects are daunting: the World Bank estimates the Mena region needs to create more than 300 million jobs by 2050, as the world is preparing for the so-called Fourth Industrial Revolution that harnesses technology and the use of AI. That is likely to impact medium and low skill jobs in the region. So what then are the implications for women and their economic integration?
While the role of women as a mainstay of economic development is not subject to dispute, women in the Mena region have been shackled by a plethora of socio-economic and legal barriers. Though there has been significant progress on legal and regulatory barriers – the World Bank’s Women Business and the Law 2020 edition noted despite enacting the maximum number of reforms, it remains the region with the lowest average score of 49.6 compared with the previous edition’s 44.9. 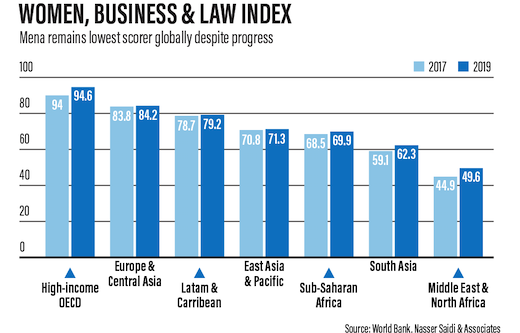 Removing legal and regulatory barriers is a necessary, but not sufficient, condition for reducing the yawning gender gap. According to the World Economic Forum’s Global Gender Gap 2020 report, gender parity will not be attained in the region for another 140 years.
While formal market labour force participation rates in the Mena region have increased over time, women have largely remained on the sidelines, despite their higher educational attainment and outperformance of men in standardised tests. The female labour force participation rate (FLFPR) has been rising, but still remains around 21.7 per cent for the region, one of the lowest in the world, and when women do participate, they experience higher unemployment rates at an average of around 19.8 per cent and closer to 40 per cent for young women. On average, women earn 70 per cent of men’s wages.
Given the barriers, women’s preference for public sector jobs is not surprising. There is a wide gender gap in self-employment and entrepreneurial activity in the region. On average, self-employed females (sole or micro enterprises) account for 30 per cent of female employment in the region, rising to as high as 63 per cent in Morocco, compared with 12.4 per cent in OECD countries.
However, only one in ten self-employed women are employers, compared to one in four self-employed men and even lower in larger firms. Similarly, women’s representation is lacking even in pre-seeded start-ups, with women accounting for just a quarter of founders, according to findings by venture capital firm Wamda and the STEP conference. A shift in ownership would help women. Female-owned businesses tend to hire more women (25 per cent) than their male counterparts do (22 per cent).
Still, some countries are leading on gender equality. The UAE – despite being ranked only 120th globally – continues to be one of the region’s best-performing countries, having closed 65.5 per cent of their overall gender gap, according to the Global Gender Gap 2020.
Digging deeper into the components, the UAE shines in the educational attainment and health sub-components, where the Emirates is close to parity, but gaps remain. The UAE government has been supportive in raising the profile of women within the government/ public sector. Women comprise 66 per cent of public sector workers. Along with nine women ministers in the UAE Cabinet, women already occupy 44 per cent of leadership roles in federal government entities and Emirati women represent 30 per cent of the UAE’s diplomatic corps.
While public policies supporting female labour force participation are to be applauded, this mindset needs to be embraced by the private sector as well to benefit the economy as a whole.

How can the region progress?

Economic growth and development do not necessarily lead to gender equality and empowerment of women.
What the region needs is affirmative action programmes that actively promote women and reverse marginalisation and discrimination.
Alongside legal and regulatory changes, and reducing the costs of doing business, the region needs to accelerate its economic diversification towards services and a more digitised economy that both tend to favour the employment of women and their economic integration.
Legal reforms allowing for part-time and flexible work arrangements help youth and women. Digital economy participation requires a public-private partnership in strengthening vocational and digital-related training for women, promoting quantitative skills training along with a massive push towards STEM.
Governments should support with public policies like more generous parental leave, greater availability of affordable childcare/childcare subsidies, promotion of work-life balance as well as gender budgeting to promote equality through fiscal policy.
Last but not least, availability of timely data on factors that facilitate and discourage the entry of women into the workforce is necessary to support policymaking at the national level, while also facilitating the private sector in its decision-making.
The bottom line is that investing in institutions and soft and hard infrastructure for greater inclusiveness will gradually lead to a change in ingrained cultural attitudes and to greater empowerment and economic integration of women.