This week’s “Weekly Insights” is on the state of equity markets in the region, with a focus on the UAE.
Markets
As the coronavirus spread to 26 countries outside mainland China, US and European markets posted a weekly loss, as did the MSCI index tracking global stock markets; Asian stocks largely fell (except in China). Regionally, markets mostly ended positive on higher oil prices. Qatar’s Doha Bank posted its biggest intra-day rise since May 2009, after a supplementary release mentioned a 5-year strategic plan for the bank. Safe haven assets like government bonds and gold gained: yield on the 30-year US Treasury hit a record low while gold price increased to its highest in more than 7 years. Among currencies, dollar touched a near 3-year high versus the euro and a 10-month high vis-à-vis the yen (FX chart: tmsnrt.rs/2egbfVh). Oil prices rose on worries of global energy demand and China’s recovery prospects amid supply disruptions.
Global Developments
US/Americas:

Bottom line: The virus spreading to 26 nations across the globe is raising questions about the economic impact. As many nations/ cities close borders (e.g. Iraq and Kuwait close Iran borders after a spike in cases in the latter; northern Italian towns closed schools and businesses), the economic impact will depend on how far the virus spreads and how fast. The International Air Transport Association’s initial forecasts are that global airline revenues could take a near-$30bn hit in 2020 due to the coronavirus, which is negatively impacting passenger demand – though some countries seem to have been relatively unaffected (see chart – https://econ.st/2VcNOAg – is that a result of cases being undetected or undiagnosed till date?)
Regional Developments

Weekly Insight on UAE/ GCC equity markets
Three news snippets were out last week: 1. Delisting of DP World; 2. Questions over the ownership structure and governance of NMC Health (the Middle East’s largest hospital operator and largest private healthcare provider in the UAE) 3. Drake & Scull’s allegations of embezzlement and fraud.
Last year, the Aramco IPO brought much cheer to regional equity markets alongside the inclusion of Saudi Arabia into emerging market indices (following UAE and Qatar previously, Kuwait to be included this year). However, markets in the GCC – in spite of many financial liberalization measures – continue to be sidelined by global investors. To a large measure, these markets generally continue to be illiquid, with a large retail investor base, and remain highly concentrated in a few sectors (banks, real estate and insurance).
A key point to highlight is that of size: take the example of UAE, with a population of just over 9 million and a nominal GDP of around USD 400bn. It is currently home to 3 stock exchanges (Abu Dhabi Securities Exchange, Dubai Financial Market, and Nasdaq Dubai; a fourth has already been announced at the recently created Dubai Future District). With a combined UAE market cap of just under 10% within MENA exchanges (in a pie dominated by Saudi Arabia), perhaps consolidation should be the name of the game.
Chart 1. Market Cap across major MENA stock markets 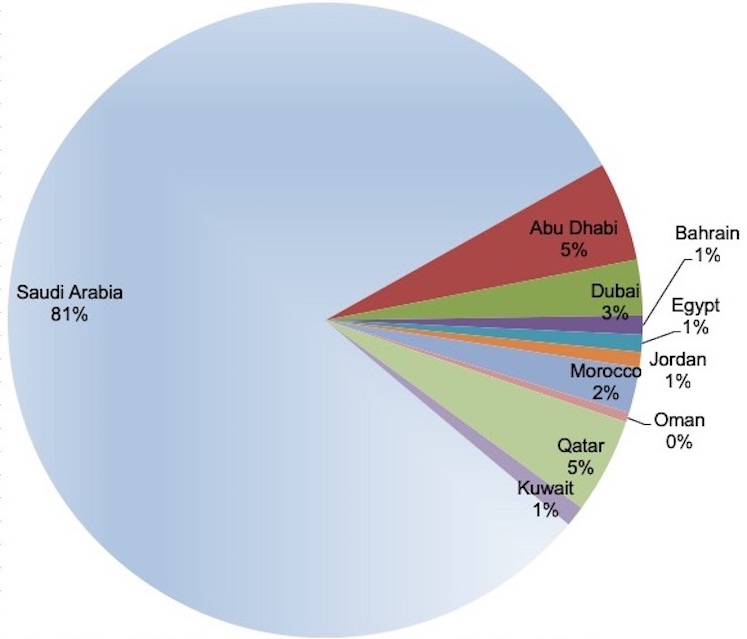 Source: Thomson Reuters Eikon, Nasser Saidi & Associates. Data as of Feb 20, 2020
In addition to consolidation, diversifying the sectors would have been the next best move. Ideally, the Aramco IPO should have opened the road to other privatisations in Saudi Arabia and across the region – a move that would have attracted private capital, new tech and resulted in job creation, all leading to greater openness and increased economic diversification. However, the current delisting of DP World (Nasdaq Dubai’s biggest listing) seems to have thrown a spanner into the works. In being taken over by the parent company Port and Free Zine World, the company will once again become fully government owned. This move also comes at a time when the UAE government was actively encouraging family-owned enterprises to list (through changes in its Agency Laws), and this is unlikely to provide any comfort to the many families in the region nor to businesses that were planning to IPO in the immediate future.
Chart 2. Top 8 stocks (by sector) at ADX and DFM account for ~85% of total market cap

Source: Thomson Reuters Eikon, Nasser Saidi & Associates. Data as of Feb 20, 2020
The other point to highlight is an important one of governance. Transparency and disclosure are an important component prior to any company going public. The case of NMC Health (where the complex shareholdings of top investors continue to remain a mystery) and Drake and Scull (where embezzlement and fraud accusations are being traded) not only highlights governance issues and transparency, but also call into question the standards of regulatory due diligence and risk review process. We do hope that the UAE’s latest corporate governance code offers some comfort to foreign investors looking to invest in the country!
Media Review
Dr. Nasser Saidi’s interview on Lebanon, UK’s new finance minister & corporate governance: Dubai Eye’s Business Breakfast show 18.02.2020
https://omny.fm/shows/businessbreakfast/nasser-saidi-associates-18-02-2020
WTO’s goods trade barometer signals further weakening of trade into first quarter
https://www.wto.org/english/news_e/news20_e/wtoi_17feb20_e.pdf
China’s manufacturing supply chain pummelled from all sides in efforts to restart
https://www.scmp.com/economy/china-economy/article/3051534/coronavirus-chinas-manufacturing-supply-chain-pummelled-all
The White Swans of 2020: Roubini
https://www.project-syndicate.org/commentary/white-swan-risks-2020-by-nouriel-roubini-2020-02
Are oil and gas turning into stranded assets? FT Podcast
https://www.ft.com/content/07dcd8d7-9492-4dfc-a54f-10c4b62cd558

Markets Global equity markets climbed up. The S&P 500 and Nasdaq in the US posted