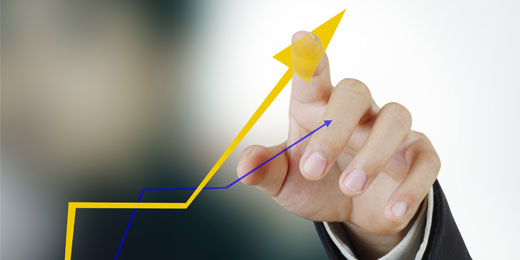 This week’s “Weekly Insights” focuses on Women and Employment in the MENA region.
Markets
Stock markets in the US (S&P 500) and Europe (Stoxx 600) closed at record highs, as investors’ concerns about the impact of the coronavirus (COVID-19) eased. Even in China, stock markets are slowly recovering thanks to the various stimulus measures (more in the Bottomline section).  Regional markets were mostly down, given the disappointing earnings season so far. The euro dropped to the weakest vis-à-vis the dollar in nearly 3 years while oil prices posted a weekly gain (the first since early-Jan), and gold prices closed near 7-year highs.
Global Developments
US/Americas:

Bottom line: The Chinese government allocated CNY 71.8bn of fiscal funds to suppress the outbreak while Chinese asset managers have pledged capital of USD 350mn to support coronavirus-hit funds in a bid to boost investor confidence (in addition to the previous week’s PBoC stimulus). With expectations that globally, central banks and governments will intervene to support economic growth should the need arise, investors are pouring money across most asset classes amidst declining volatility indicators (https://tmsnrt.rs/2V1gWul).
Regional Developments

Weekly Insights on Women and Employment in the MENA region
Two news items inspire this week’s weekly insight: the FT’s feature on Middle East’s demographic dividend and the Global Women’s Forum being held in Dubai 16-17 Feb.
The young fast-growing population should have been the cornerstone of growth in the MENA region: it is the world’s second youngest region (behind sub-Saharan Africa) with close to 60% of the population under 30. However, low levels of growth, the lack of job creation and rising levels of unemployment has led to this being a curse rather than a boon (which ignited the Arab Spring back in 2011) and continues to fuel ongoing anti-government protests- from Algeria to Sudan, Lebanon to Iraq). The World Bank estimates that MENA needs to create a staggering 300mn plus jobs by 2050, and all this while the world is preparing for the 4th industrial revolution (a technological revolution including widespread use of AI) which is likely to displace and destroy medium and low skill jobs in the region.
While the role of women in supporting economic development is not subject to dispute, women in the MENA region have been held back by various cultural and socio-economic barriers (the usual suspects of marriage, childcare and others like access to a bank account, ease of mobility, property rights, and so on). There has been significant progress on legal and regulatory barriers – the World Bank’s Women Business and the Law 2020 edition noted that the region was enacting the maximum number of reforms[1], though it remains the region with the lowest average score (49.6 vs the previous edition’s 44.9). The legal changes of course need to be accompanied by equal participation of women and men in the labour market and business, let alone politics. According to WEF’s Global Gender Gap 2020 report, gender parity will not be attained in the region for another 140 years!
While labour force participation rates in MENA have improved over time, women have largely remained on the sidelines (in spite of their higher educational attainment and outperformance in standardized tests). The female labour force participation rate (FLFPR) has been rising, but still remains around 21.7% for the region – and low FLFPR coincides with higher female unemployment rates at an average of around 17.8% and closer to 40% for young women!
The region’s preference for public sector jobs – especially among women – however is not surprising, given the wide gender gaps in self-employment and entrepreneurial activity in the region. It is estimated that on average, self-employed females account for 30% of female employment in the region, rising to as high as 63% in Morocco (vs. 12.4% in the OECD). However, only one in ten self-employed women are employers, compared to one in four self-employed men; this is even lower in larger firms (OECD). Women representation is lacking even in pre-seeded start-ups, with women accounting for just a quarter of the founders (Wamda, STEP conference, 2020). This needs to change – especially as female-owned businesses tend to hire more women (25%) than their male counterparts do (22%).
How can the region progress? Economic growth and development do not necessarily lead to gender equality and empowerment of women. What the region needs is an affirmative action programme that actively promotes women and reverses marginalisation and discrimination. Alongside legal and regulatory changes, and reducing the costs of doing business, the region needs to support the move towards a more digitized economy (i.e. encouraging flexible work arrangements, strengthening vocational & digital-related training for women, promoting quantitative skills training, greater push towards STEM etc.). Last but not least, availability of timely data on factors that facilitate and discourage entry of women into the workforce would support policy making at a nation level. The bottom line is that investing in institutions and infrastructure for greater inclusiveness and participation will gradually lead to a change in ingrained cultural attitudes and to greater empowerment and economic integration of women.
Chart 1: Significant gender gap in account ownership 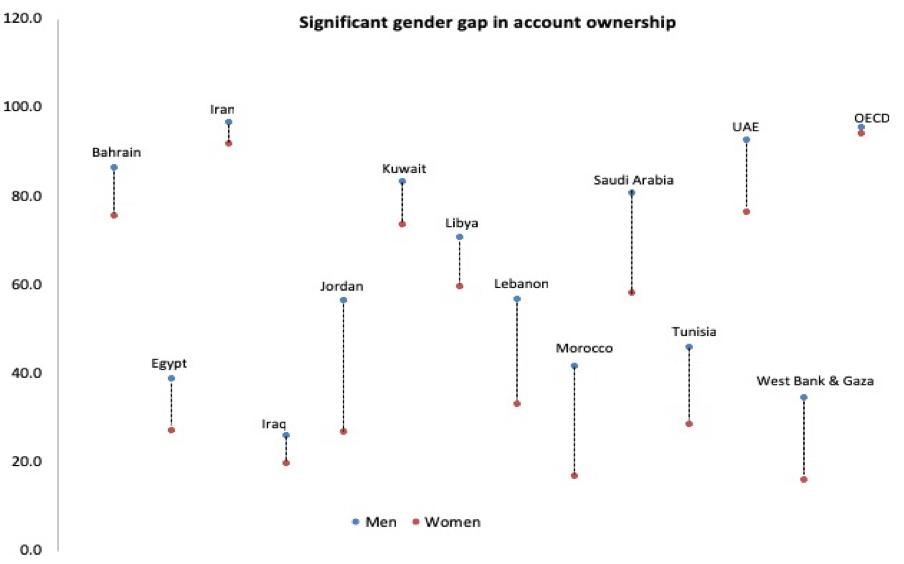 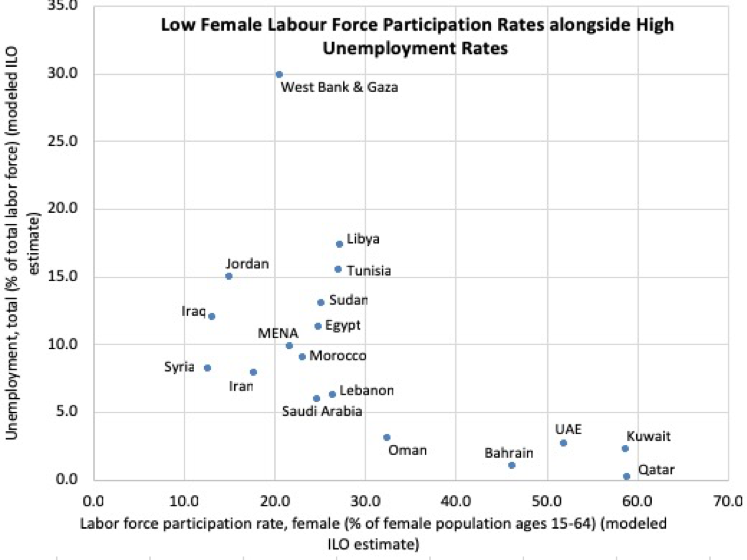 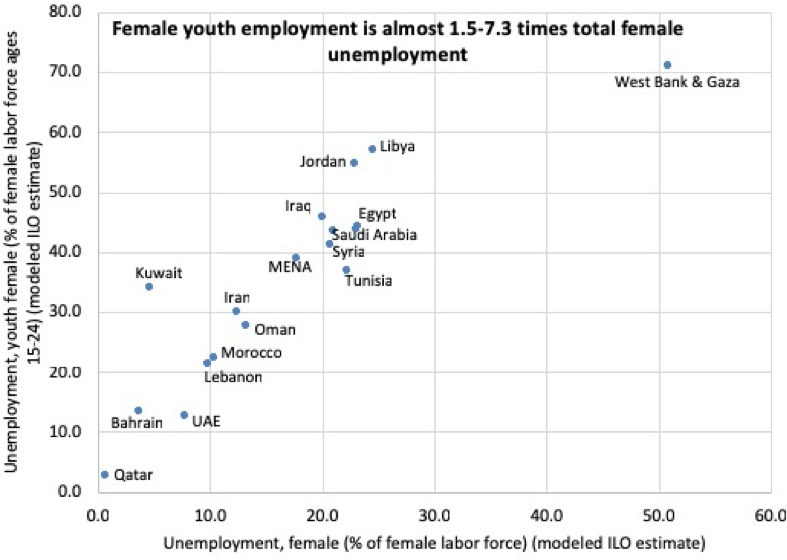 Table: A SWOT Analysis of Women & Employment in the MENA region 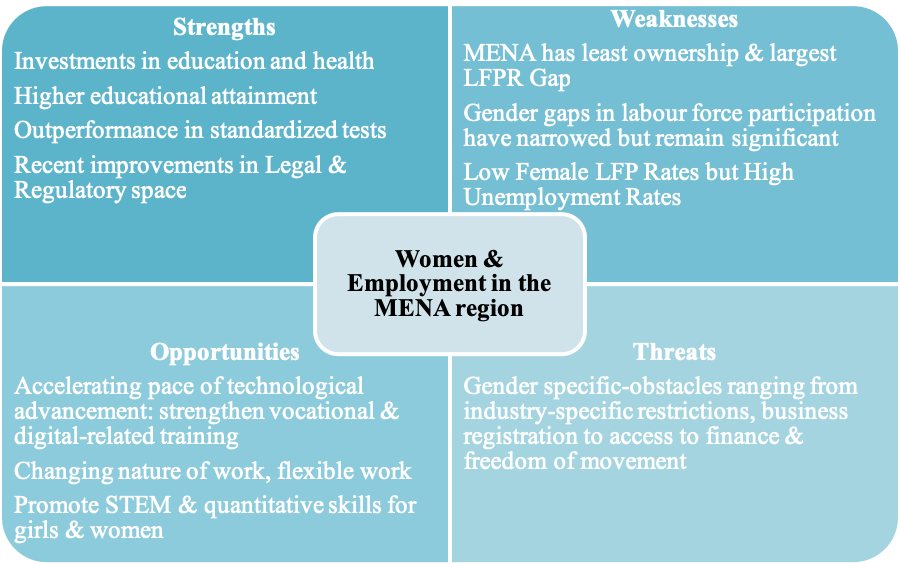