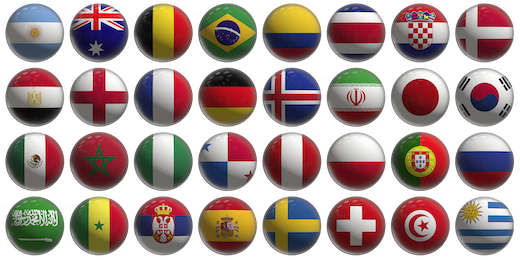 The article titled “World Cup 2018: can anyone predict the winner?” appeared in The National on 2nd July, 2018 and is posted below. Click here to access the original article.

World Cup 2018: can anyone predict the winner?

Alongside the animals and traditional tipsters, high tech is now being used to try to forecast the next champions

Last week there was a “Black Swan” event at the 2018 Fifa World Cup: the first time in 80 years, since 1938, that Germany, the current World Cup holder, was eliminated at the initial group level.
Other World Cup incumbent champions have been eliminated in the first round: France in 2002; Italy in 2010; and Spain in 2014. Is a champions’ curse emerging? The World Cup is one of the most-watched sporting events in TV history, with an estimated 3.4 billion people tuning in to watch the matches this year. The 32-team tournament fever is rapidly rising as the knockout stages get progress. Which teams will make it to the final?
From the deceased Paul the octopus (from excitement or exhaustion?) to Shaheen the camel, and more recently the clairvoyant deaf cat Achilles, a niche World Cup prediction industry has mushroomed. Over the past 10 years, economists (including at investment banks and academics), statisticians, data scientists, and mathematicians have joined the predictions party alongside the traditional tipsters. New tools including data mining, portfolio theory, econometrics, algorithms and machine learning are being harnessed in an attempt to predict the outcome.
Will the economists, statisticians and algorithms be any better? Will they turn out to be more successful than the animals? Predictions are based on historical performance data that are used to estimate a set of “probability trees “of the success of teams in various rounds. This can be done with econometric tools (similar to those used to pick equities in stock markets), statistical modelling (eg Monte Carlo simulations where multiple “tournaments” are simulated to arrive at a “winner”, ie the team that wins most number of times in these simulations) and, recently, algorithmic predictions. US bank Goldman Sachs and its 1 million simulations using artificial intelligence algorithms favour Brazil to win the World Cup (Dankse Bank shares this view as to the winner), ING had its money on Spain, and Nomura and EA Sports were backing France in a France-Spain final. Before the tournament began, UBS favoured Germany after running a computer simulation of the tournament 10,000 times, (using the Elo-ranking of teams as input, with Commerzbank sharing this view). Given the elimination of Germany the model will now have to be rewired.
A poor predictions record
Indeed, the predictions versus outcomes record over the past two World Cups is poor. As the accompanying table shows, none of the banks and their specialised teams were able to pick the winners. These results are not dissimilar to predicting stock markets or individual stock returns: “experts” or computer models do not outperform random, dart-throwing on a newspaper stock picking.

World Cup football remains an unpredictable tournament (hence the excitement) with the outcome of matches also dependent on factors like the fitness of star players, the weather on the day of the match, the number of coaches/managers fired before the start of the tournament, how lenient/strict referees are in one match versus another. The recent introduction of modern technology in the form of Video Assistant Referees (VAR) is making refereeing more accurate but also increasing the number of recorded faults and at this World Cup swelling the number of free kicks and penalties.
Who are the real winners?
We plan to be agnostic and watch who emerges the winner on July 15 before deciding whether to endorse the prediction techniques of Achilles the cat or those of some investment bank. However, Fifa is definitely one major winner from the tournament: it is expected to gain about $6 billion in revenue from this year’s World Cup, up 25 per cent from the previous tournament, and will receive a further $3bn from broadcast revenue.
Although viewership reportedly fell a whopping 44 per cent in the US (not surprising given that the team is not among the 32 taking part, although it now pays more to Fifa for broadcasting rights than any other country), India broke the viewership record, with more than 47 million people watching the first four matches (football is now the third-most popular sport to watch in India, and in a few states the fan base even outranks cricket).
The shift to emerging economies
The landscape and geography of the World Cup is likely to radically change in the coming decades. The game is slowly gaining prominence in the world’s most populous nations: China, which qualified for the tournament only once in 2002, recently announced plans to create 20,000 new training centres, the world’s biggest academy in Guangzhou (to cost about $185 million) and hopes to host a World Cup “in the future”, with 2034 considered a likely date. Indonesia, with its large population base, has the highest average Premier League audience of any country in the world, even higher than the UK.
There have been 20 World Cups with eight different countries winning with the trophy. Brazil have won the most with five, closely followed by Italy and Germany/West Germany with four. Uruguay and Argentina have both won it twice, and England, France and Spain have all won it the once. Asian nations, so far, have taken a back seat in this game: only Japan and Korea are among the 32 teams that qualified for the event this year.
This pattern will change given the power of demographics and growing incomes in the emerging economies of Asia and Africa. Economics matters. A poor country is less likely to have the infrastructure and financial capacity to support training, competing teams and be able to competitively compensate players; indeed there has been a “sports talent drain” to high-paying countries. In turn, the popularity of the game tends to be proportional to the number of “good” players a country has.
This can be reversed. A good starting point is what China is doing: start with the children and encourage them to develop the right “technical” skills (similar to their Olympics track record).