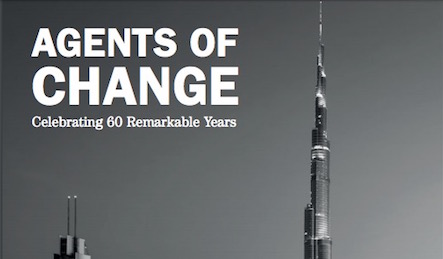 The article titled “A New Economic Model For The Low Oil Price Era” (PDF), was published in MEED’s special publication “Agents of Change”.
The region is on a transformation path, but GCC governments need to undertake further economic and structural reforms to adjust to the new oil normal, says economist Nasser Saidi
For a region highly dependent on oil for national income, government revenues and exports, the environment of low oil prices, or the “New Oil Normal” has been a massive macroeconomic shock. GCC government budgets swung into deficits, (deficit of 6.9% of GDP this year compared to a surplus 10.8% in 2013), fiscal austerity programs initiated, amidst sharp declines in current account balances (estimated at a deficit of 0.5% of GDP this year compared to a 2013 surplus of 21.4%) and reduced liquidity.
The GCC countries, however, are able to finance the high twin deficits by drawing on accumulated fiscal buffers and substantial international reserves and by the issuance of domestic and foreign debt[1]. However, the dip in net foreign asset accumulation continues to be a worrisome trend, as is lower government spending and its impact on the non-oil sector. Tighter financial conditions and a real exchange rate appreciation also challenge economic activity in the non-oil sector. All this has meant lower growth prospects alongside slower growth in both investment and consumption. The GCC is expected to grow at 2.3% this year, contrasted with an average of 3.8% during 2000-14. Fiscal austerity has exacerbated the impact of the oil price tsunami.
Transition and Transformation
In the short term, GCC policy adjustments have focused on cuts in fuel, water and electricity subsidies and capital expenditure, in addition to revenue generation through higher or new fees and charges. More significant policy adjustments will include the introduction of a Value Added Tax at 5% to be implemented across the GCC in 2018, which is estimated to bring in a potential revenue of between 0.8-1.7 percent of GDP, depending on the country. Privatization has been on the agenda of most GCC governments after the oil price dip, but the most anticipated one remains the Aramco IPO (with a potential to become the world’s most valuable company, at around one and half trillion dollars).
All GCC countries have issued vision statements over the last few years, which describe their development plans either for the medium or long term. Among the more recent ones, Saudi Arabia’s Vision 2030 and subsequent National Transformation Plan (NTP) is the most ambitious. The NTP lays out 178 strategic objectives with over 500 reform measures and benchmarks for 24 ministries and government entities to be achieved by 2020. The next step will be for these plans to be implemented through policy measures and actions. To be successful, the shock therapy needs clear prioritization, sequencing of reforms and strong private sector engagement.
A New Economic Development Model
The GCC are on a reform and transformation path, but need to undertake major economic and structural reforms to adjust to the New Oil Normal. The economic and social imperative for the GCC is to diversify their economies away from oil and boost the role of the private sector to become the main engine of job creation. A New Economic Development Model for the GCC, has a number of building blocks:

The New Oil Normal is a blessing in disguise for the GCC: it offers an unprecedented opportunity to implement economic diversification strategies and reform policies that will underpin more sustainable, flexible and resilient economies. The New Oil Normal requires a new economic development model, a new social contract & deep structural reform agenda. The impact on the region of such reform would be significant, through job creation, higher productivity growth, investment rates and trade linkages, not to mention the dynamic effect of greater private sector engagement on job creation and innovation.