Talk from the Top – Parting thoughts from DIFC exec 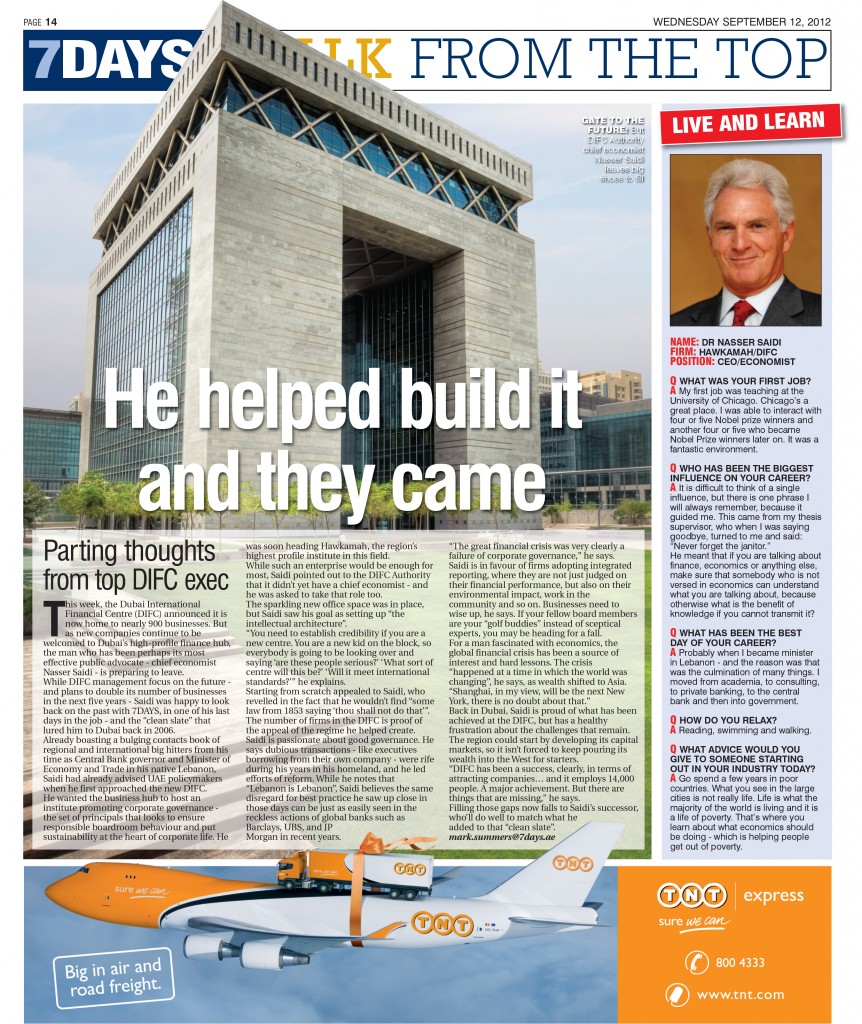 This week, the Dubai International Financial Centre (DIFC) announced it is now home to nearly 900 businesses.

But as new companies continue to be welcomed to Dubai’s high-profile finance hub, the man who has been perhaps its most effective public advocate – chief economist Nasser Saidi – is preparing to leave.

While DIFC management focus on the future – and plans to double its number of businesses in the next five years – Saidi was happy to look back on the past with 7DAYS, in one of his last days in the job – and the “clean slate” that lured him to Dubai back in 2006.

Already boasting a bulging contacts book of regional and international big hitters from his time as Central Bank governor and Minister of Economy and Trade in his native Lebanon, Saidi had already advised UAE policymakers when he first approached the new DIFC.

He wanted the business hub to host an institute promoting corporate governance – the set of principals that looks to ensure responsible boardroom behaviour and put sustainability at the heart of corporate life.

He was soon heading Hawkamah, the region’s highest profile institute in this field. While such an enterprise would be enough for most, Saidi pointed out to the DIFC Authority that it didn’t yet have a chief economist – and he was asked to take that role too.

The sparkling new office space was in place, but Saidi saw his goal as setting up “the intellectual architecture”.

“You need to establish credibility if you are a new centre. You are a new kid on the block, so everybody is going to be looking over and saying ‘are these people serious?’ ‘What sort of centre will this be?’ ‘Will it meet international standards?’” he explains.

Starting from scratch appealed to Saidi, who revelled in the fact that he wouldn’t find “some law from 1853 saying ‘thou shall not do that’”.

The number of firms in the DIFC is proof of the appeal of the regime he helped create. Saidi is passionate about good governance. He says dubious transactions – like executives borrowing from their own company – were rife during his years in his homeland, and he led efforts of reform.

While he notes that “Lebanon is Lebanon”, Saidi believes the same disregard for best practice he saw up close in those days can be just as easily seen in the reckless actions of global banks such as Barclays, UBS, and JP Morgan in recent years.

“The great financial crisis was very clearly a failure of corporate governance,” he says.

Saidi is in favour of firms adopting integrated reporting, where they are not just judged on their financial performance, but also on their environmental impact, work in the community and so on. Businesses need to wise up, he says. If your fellow board members are your “golf buddies” instead of sceptical experts, you may be heading for a fall.

For a man fascinated with economics, the global financial crisis has been a source of interest and hard lessons. The crisis “happened at a time in which the world was changing”, he says, as wealth shifted to Asia.

“Shanghai, in my view, will be the next New York, there is no doubt about that.” Back in Dubai, Saidi is proud of what has been achieved at the DIFC, but has a healthy frustration about the challenges that remain. The region could start by developing its capital markets, so it isn’t forced to keep pouring its wealth into the West for starters.

“DIFC has been a success, clearly, in terms of attracting companies… and it employs 14,000 people. A major achievement. But there are things that are missing,” he says.

Filling those gaps now falls to Saidi’s successor, who’ll do well to match what he added to that “clean slate”.

WHAT WAS YOUR FIRST JOB?

My first job was teaching at the University of Chicago. Chicago’s a great place. I was able to interact with four or five Nobel prize winners and another four or five who became Nobel Prize winners later on. It was a fantastic environment.

WHO HAS BEEN THE BIGGEST INFLUENCE ON YOUR CAREER?

It is difficult to think of a single influence, but there is one phrase I will always remember, because it guided me. This came from my thesis supervisor, who when I was saying goodbye, turned to me and said: “Never forget the janitor.”

WHAT HAS BEEN THE BEST DAY OF YOUR CAREER?

Probably when I became minister in Lebanon – and the reason was that was the culmination of many things. I moved from academia, to consulting, to private banking, to the central bank and then into government.

HOW DO YOU RELAX?

WHAT ADVICE WOULD YOU GIVE TO SOMEONE STARTING OUT IN YOUR INDUSTRY TODAY?

Go spend a few years in poor countries. What you see in the large cities is not really life. Life is what the majority of the world is living and it is a life of poverty. That’s where you learn about what economics should be doing – which is helping people get out of poverty.