Stock markets in Asia and Europe were reeling Monday amid fresh concerns over the strength of the global banking industry as HSBC announced a 70% fall in profits and the U.S. government said it would pump $30 billion into ailing insurance giant AIG. US Stocks tumbled, driving the S&P 500 to its lowest level since 1996 (down 4.3% to 683) and the DJIA fell by 4.1% to 6,594, after Moody’s said it may cut JPMorgan’s credit rating and China quelled speculation the government will add to its stimulus plan. The situation has worsened with news about the near-bankruptcy of General Motors. The weak sentiment globally has rubbed off on the regional markets also; only Qatar has seen a positive change from last week. Oil rose above $45, gaining support from a weak dollar and OPEC meeting later this month. Gold prices have started to rise after falling earlier this week, as investors flocked to gold as a safe haven, on volatility in other assets. 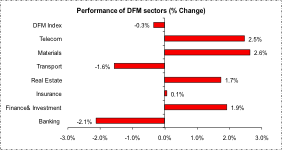 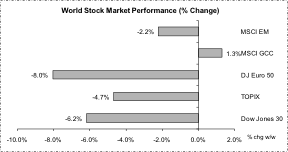