World stock markets continue their consolidation, both in developed and emerging markets. Across the Gulf, stock markets have also rebounded, with the exception of Kuwait and Bahrain. The DFM has displayed a broad based recovery across sectors with the exception of Materials. The Libor rates have normalized, while the UAE Interbank rates still indicate that tensions in the money markets have not completely abated. Exchange rates remain broadly stable and oil is regaining some lost ground in the wake of security concerns after the Israeli aggression on Gaza. 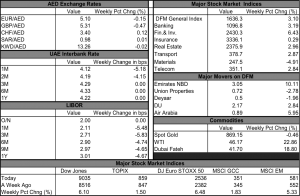