Stock markets are still falling sharply in the UAE, amid low volumes, as a result of uncertain prospects, lower oil prices and lack of good news. Interbank rates are easing as a result of the announced dollar-dirham swap facility set up by the Central Bank. In other GCC countries equities have rebounded slightly on the back of rumors that governments are stepping in to sustain prices. Exchange rates are stable, but oil prices have remained generally weak drifting down towards 35 USD p/b. Subdued activity will prevail throughout the first week of the new year. 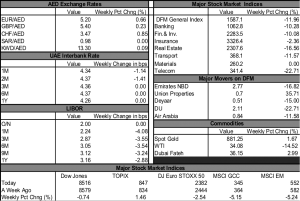