GCC equity markets continued to fall last week notwithstanding some regained stability worldwide (with Emerging Markets gaining 5.5%). As a result of central bank easing, Libor has fallen sharply, but in the UAE interbank rates have actually gone up or remained stable. In exchange markets the euro has climbed against the dollar as result of the Fed move and worse than expected deterioration in economic conditions. 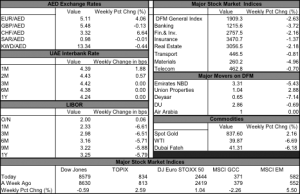