Markets remain nervous, as outbursts of optimism are followed by sudden pessimism. Most of this behavior stems from political developments with direct repercussion on the US economic outlook. Earlier last week the speech by President-elect Obama outlining a stimulus package sparked a wave stock market recovery, but on Friday the collapse of the automotive bail out sent indices sharply down. Adding to apprehension there has been the news of a hedge fund fraud with losses estimated at USD 50 billion. Commodity markets were also hit, with oil down $4pb, but the current level $43pb is off recent lows (a consideration that applies to most equity markets, even after Friday’s declines). The dollar has begun to weaken, reflecting some hawkish comments from officials at the European Central Bank and the concerns about the depth of the recessions.
Economic data have been broadly negative with the U.S. economy leading the way to global weakness in Q4. PMI data were below expectations and weekly jobless claims climbed by 58k to 573k. October trade data depict falling exports, which when factored in forecasting models imply a US Q4 GDP contraction by 5% qoq, saar. Industrial production in the euro area was down 1.2% mom and 5.3% yoy. The Q4 data from China continue to look very weak with exports falling 2.2% yoy in November.
Amid the negatives there are a few encouraging signs: the extreme volatility of stock markets in the past weeks is subsiding with the VIX is at 55.7, close to its lowest level since early October. U.S. retail sales were stronger than expected in November: ex autos and gas, sales were up 0.3% mom, (against consensus of a 0.5% drop). Chinese retail sales were up 20.8%yoy. If deflated by CPI, this figure suggests that real spending in China has actually accelerated since the early part of the year
Government bonds have undergone some dramatic developments: negative U.S. bill rates, falling U.S. long-term yields (30s are down to almost 3%) despite staggering longer-term issuance prospects which might be considered as a form of unsustainable bubble triggered by risk aversion and flight to safety. The U.S. Federal deficit in the first two months of the fiscal year has been $402 billion; if the cost of the new stimulus package announced by President-elect Obama is factored in the US deficit could reach 10% in 2009.
Central banks’ easing has continued with Canada cutting rates a surprising 75bp on Tuesday, followed by Switzerland, which cut its 3m LIBOR target by 50bp to 50bp; in Asia Korea cut its benchmark rate 100bp to 3% and Taiwan, by 75bp, to 2%; finally South Africa, reduced rates by 50bp to 11.5%.

Gulf bourses recorded relative stability in the first 10 days of December after crashing by more than $500 billion (Dh1.8 trillion) since June. With the exception of the Saudi and Bahrain exchanges, the other GCC bourses recovered slightly, though the capitalization of all remained at a three-year low. Saudi stocks reopened on a high after the Eid Al Adha holiday, with the benchmark advancing 4.1% on Saturday. With volatility declining across the GCC markets, the DFM is expected to close above the 2000-mark this week.

A further decline in oil prices and the global financial crisis will reduce GDP growth in the MENA region to 3.9% in 2009 from 5.8% in 2008, according to a recent World Bank report. While the UAE’s GDP growth is expected to slow as well, it is expected to remain above 6-7%, according to the UAE Ministry of Economy, much above the growth rates predicted elsewhere in the MENA region. Dubai’s non-oil foreign trade, including trade via free zones and customs warehouses, surged by 44.5% during the first nine months of 2008 compared to the corresponding period in 2007, according to a Dubai World’s Statistics Department report. The report listed China as the main trading partner in import (AED 40.5bn), with India following at a close second (AED 37.2bn) and the US (AED 24.9bn). 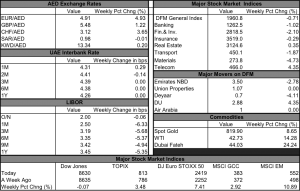